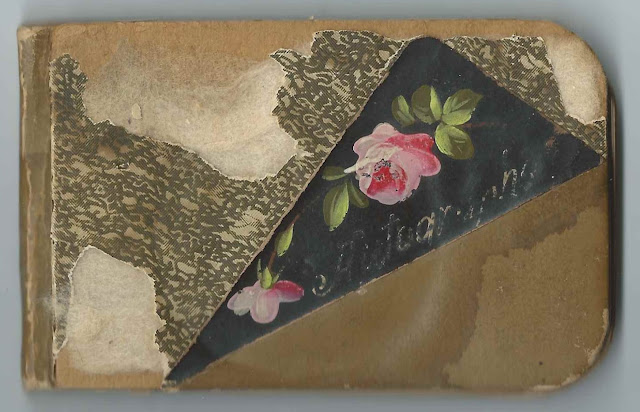 Autograph album that was given at Christmas in 1889 to Jessie Wetsel of Bird City, Kansas.  She noted that it was Christmas 1890, but since there are inscriptions from earlier in 1890, I believe she inscribed her name after the year had turned.

Tucked in the album is a tintype of children named:

I believe Elsie and Herbert were Jessie's siblings.  Elsie died at just over a year, so is presumably the baby in the older girl's lap.  Elsie's buried in the Bird City Cemetery.  Winnie may have been Jessie's cousin, who hailed from or inscribed a page at Grand Island, presumably Grand Island, Nebraska . 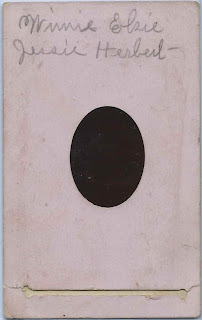 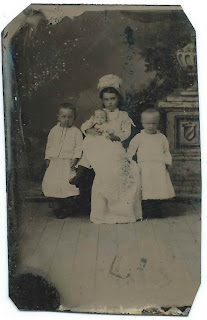 The album measures approximately 4-1/4" by 2-3/4" and contains the sentiments of 32 of Jessie's relatives, friends, schoolmates and teachers.  An alphabetical surname list and an alphabetical list of the inscribers, together with any personal information they offered, appear at the end of this list.

One benefit of autograph albums from the 1890s is that they show residences in the large gap between the 1880 and 1900 Censuses, as a result of the fire that destroyed most of the 1890 Census.

Jessie Florine Wetsel, was born February 2, 1884 at Bushnell, Illinois, the daughter of James Granville Wetsel and Eleanor (Chadderdon) Wetsel.  The index for Jessie's Social Security application, which shows her married surname as Benintendi, gives her maiden name and father's surname as Wetzel; whether Jessie wrote Wetzel or it was misinterpreted by the indexer or whether the surname actually was Wetzel, I don't know.

Jessie's mother Eleanor had been previously married to William Henry Jennings and had a son James Louis Jennings with him.  William died in 1877.  Eleanor's 1882 marriage to James G. Wetsel, which produced Jessie, Herbert and Elsie, would end in divorce.  The Bird City News issue of September 27, 1888 notes that Eleanor brought suit against him for adultery.

About 1890, Eleanor married Ephraim B. Carroll, who had children from a previous marriage.  One of these children, Fanny Carroll, inscribed a page in Jessie's album in July 1890. 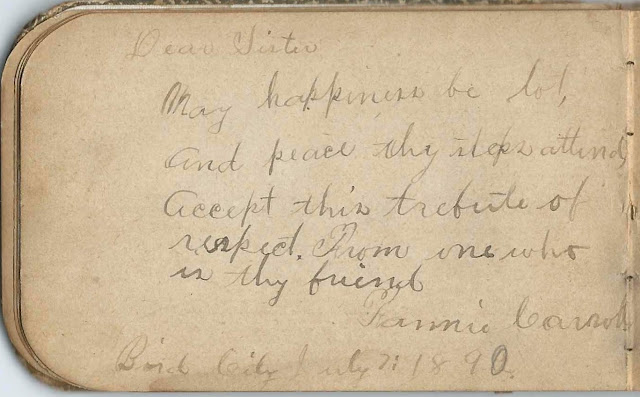 Eleanor and Ephraim had at least two children of their own.  One of these, Kenneth Carroll, inscribed a page in Jessie's album on April 22, 1895 at Bird City, Kansas. 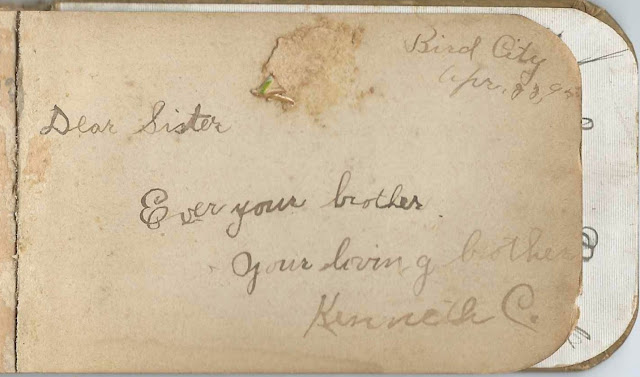 If you have corrections to the information above or additional information on the Jennings, Wetsel or Carroll families or information on any of the inscribers listed below, please leave a comment or contact me directly.