1876 Letter from Cyrus M. Stockwell to a Relative re: Research for a Work on the Stockwell Family 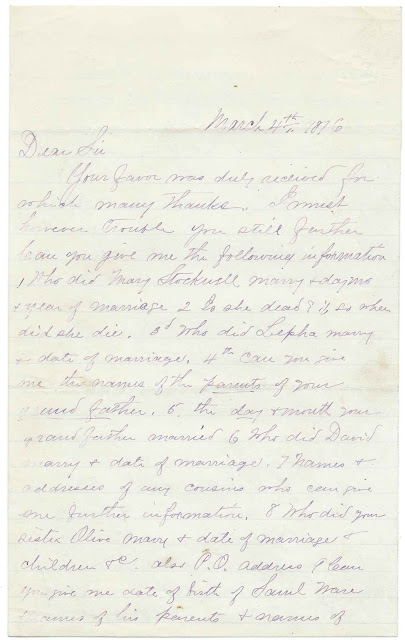 The letter was found in a Bible started by Joel Stockwell and wife Mary (Bailey) Stockwell of Vermont and Portage, New York.  Sadly, the only envelope found with the letter is blank; it's possible, however, from clues in the letter and entries in the Bible that the recipient was Judson A. Stockwell (1833-1907) of Hume, New York.

The letter is addressed to "Dear Sir".  Mention is made of sister Olive.  Judson had three sisters, including a sister named Olive, and no brothers.

The Bible has four pages of family records with entries for:

The author was looking for information to complete his work on the genealogy of the Stockwell family. This may have been privately published, as I haven't found anything mentioned online. 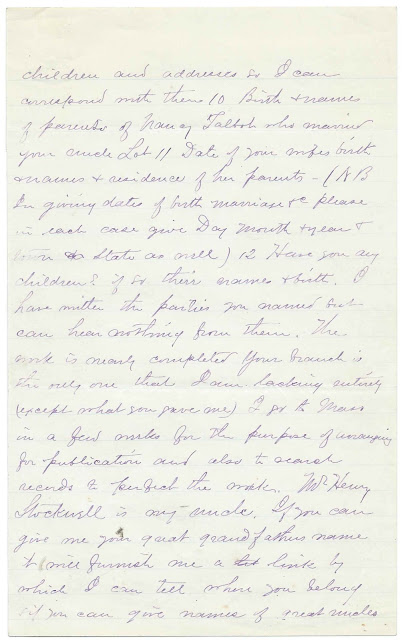 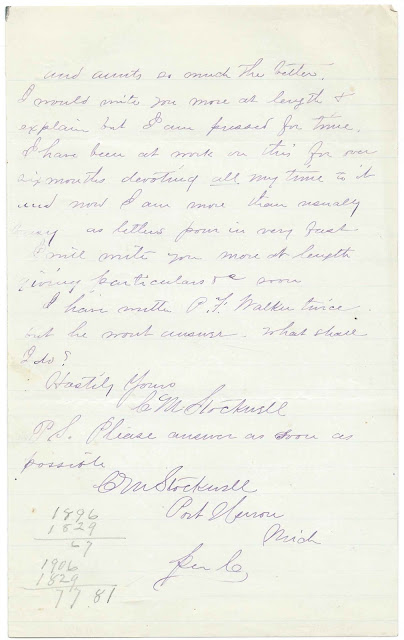 If you have a theory as to the identity of the recipient, especially if different from Judson A. Stockwell, please leave a comment or contact me directly.

March 4th 1876
Dear Sir
Your favor was duly received for which many thanks.  I must however trouble you still further.  Can you give me the following information
1.  Who did Mary Stockwell marry & day mo & year of marriage  [Possibly Mary Stockwell, daughter of Joel Stockwell and Mary (Wheeler) Stockwell?]
2.  Is she dead?  If so, when did she die.
3d.  Who did Lepha marry & date of marriage  [Could Lepha be the Leafy Stockwell mentioned in the Bible; also a daughter of Joel Stockwell and Mary (Wheeler) Stockwell?]
4th.  Can you give me the names of the parents of your grandfather. [Could they be Joel Stockwell and Mary (Wheeler) Stockwell?]
5.  the day and month your grandfather married
6.  Who did David marry and date of marriage.  [Possibly son of Joel Stockwell and Mary (Wheeler) Stockwell?]
7.  Names & addresses of any cousins who can give me further information.
8.  Who did your sister Olive marry & date of marriage & children etc.  Also, P.O. address  [Presumably Olive M. (Stockwell), daughter of Joel Stockwell and Mary (Bailey) Stockwell and wife of  Daniel L. Wells]
9.  Can you give me date of birth of Samuel Ware & names of his parents & names of children and addresses so I can correspond with them  [Presumably [Samuel] or Lemuel R. Ware, husband of Mary T. Stockwell, daughter of Joel Stockwell and Mary (Bailey) Stockwell
10.  Birth & names of parents of Nancy Talbot who married your uncle Lot. [no spouse mentioned in Bible]
11.  Date of your wife's birth & names & residences of her parents. (NB - In giving dates of birth marriage etc please in each case give Day Month + year + town & State as well) [Presumably Ann (Robinson) Stockwell; married to Judson A. Stockwell on February 7, 1867 at Portage, New York]
12.  Have you any children?  If so, their names & birth.  [Son Joel W. Stockwell, born March 27, 1869; married Helene M. Torpey on February 20, 1892 at Hume, New York]
I have written the parties you named but can hear nothing from them.  The work is nearly completed.  Your branch is the only one that I am lacking entirely (except what you gave me).  I go to Mass in a few weeks for the purpose of arranging for publication and also to search records to perfect the work.  Mr. Henry Stockwell [or W. Henry Stockwell] is my uncle.  If you can give me your great grandfather's name it will furnish me a link by which I can tell where you belong & if you can give names of great uncles and aunts so much the better.
I would write you more at length & explain but I am pressed for time.  I have been at work on this for over six months devoting all my time to it and now I am more than usually busy as letters pour in very fast.
I will write you more at length giving particulars etc soon.
I have written P. F. Walker twice but he won't answer.  What shall I do?
Hastily Yours
C. M. Stockwell [presumably Dr. Cyrus M. Stockwell]
P.S.  Please answer as soon possible.
C. M. Stockwell
Port Huron, Mich.

Posted by Pam Beveridge at 9:14 AM