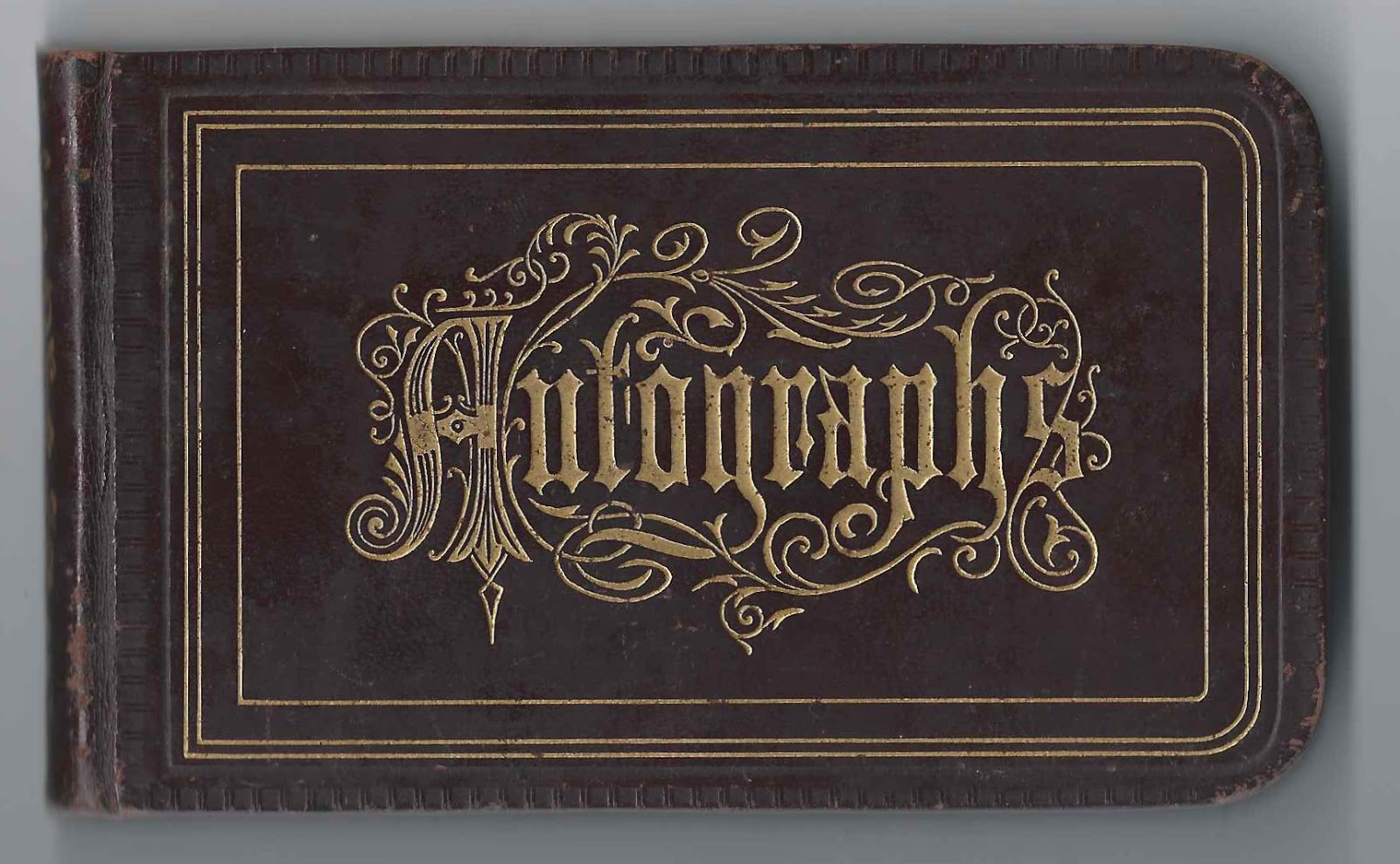 Above, the image of the cover of one of two autograph albums that belonged to Mary Elizabeth Bechly of Searsboro, Iowa.  See the other album here.

As you can see below, Mary used several spellings of her surname on the two albums: Bechly, Beckly and Beckley.  Her father was born in Germany, and the original name may actually have been something else. 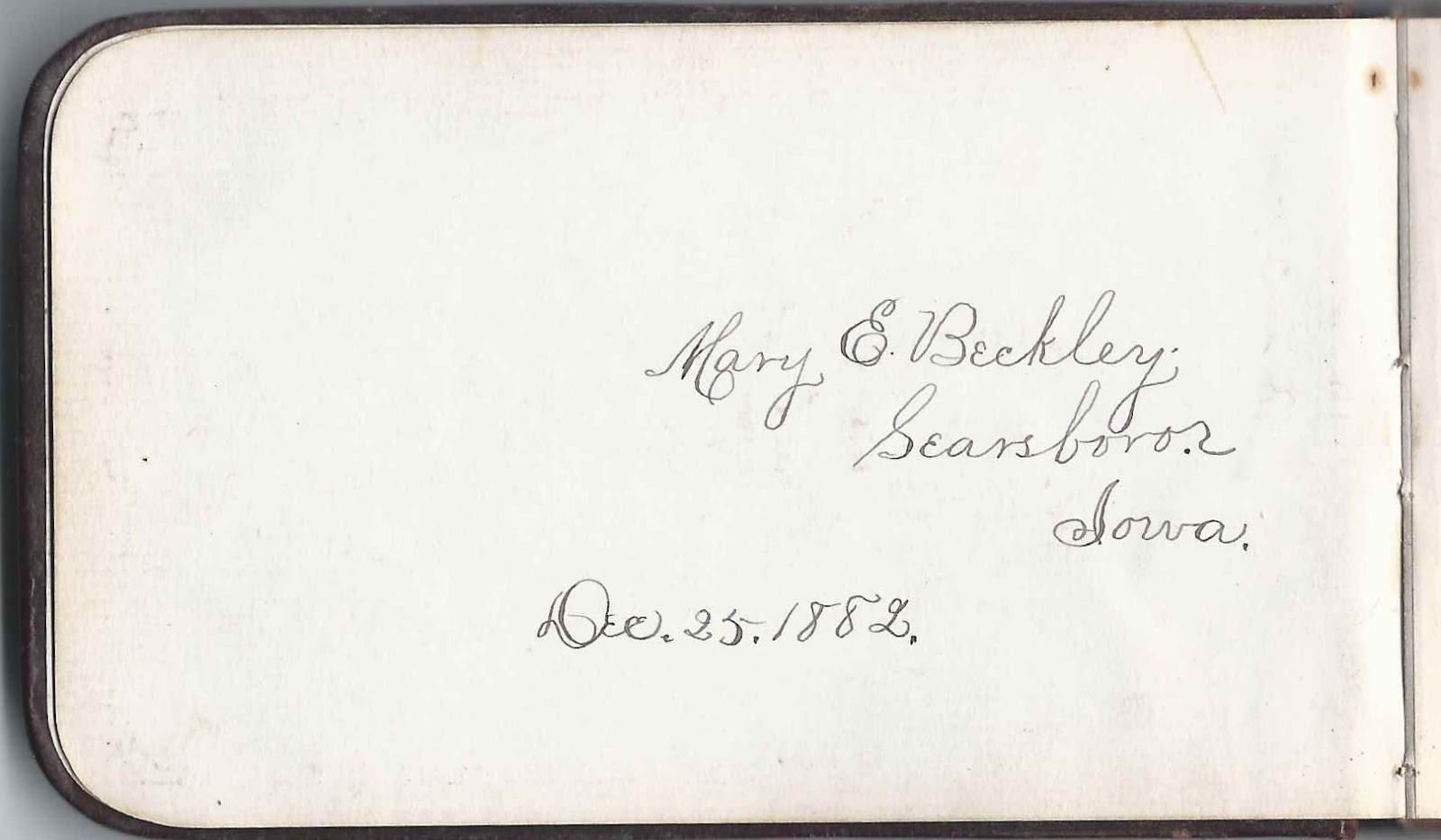 The album is approximately 5-1/4" x 3" and contains the sentiments of 37 of Mary's relatives, friends and schoolmates.  An alphabetical surname list and an alphabetical list of the signers, together with any personal information or family relationships they mentioned, appear at the end of this post. 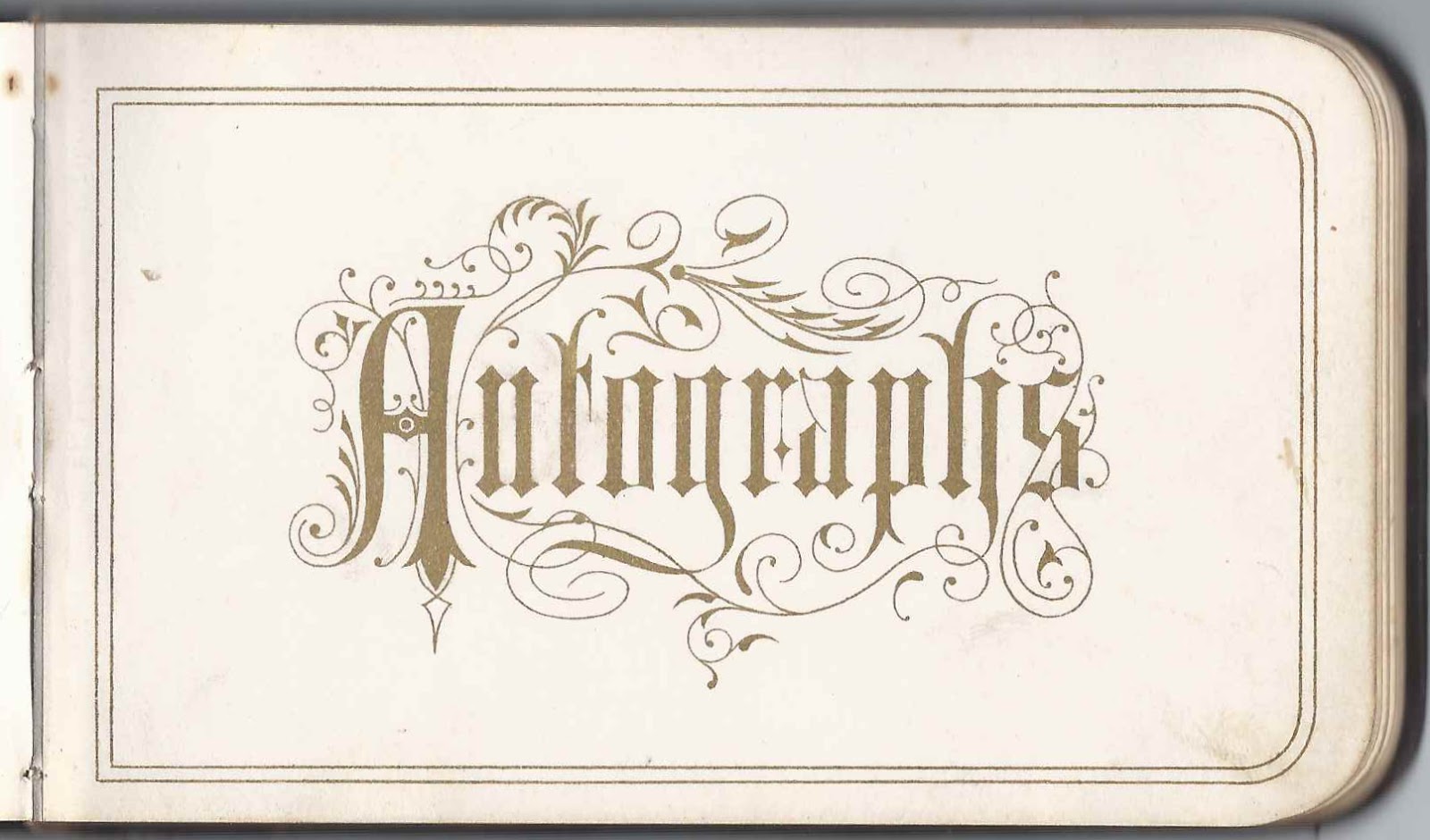 Mary Elizabeth Bechly was born May 7, 1868 in Poweshiek County, Iowa, the daughter of Freidrich August Bechly and his first wife Hepzibah Beulah (Dumville) Bechly, who were born in Germany and England, respectively.

Hepzibah died less than a year after Mary's birth.  Freidrich, or Fred, then married Lydia Maria Weesner, some of whose relatives signed pages in the album.  Mary had a full brother Frederick William Bechly and, I think, six younger half-siblings.

Elizabeth Dumville married John W. Williams in 1846.  They and their family were living in Washington, D.C. at the time of the 1880 Census.  Son George Thomas Williams of Grinnell, Iowa, signed a page in this album on March 22, 1885.  He also signed a page in the other album in 1881. 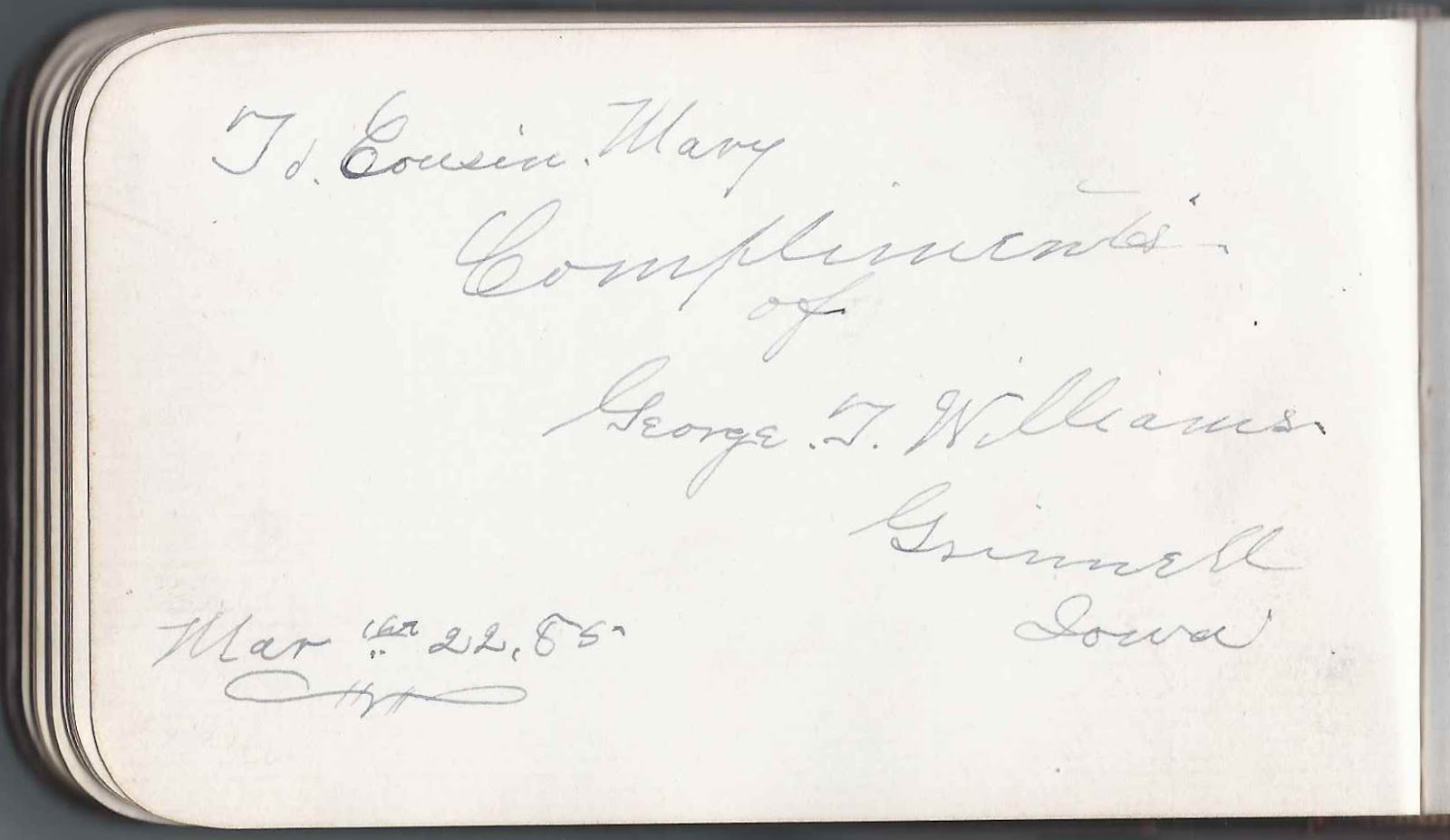 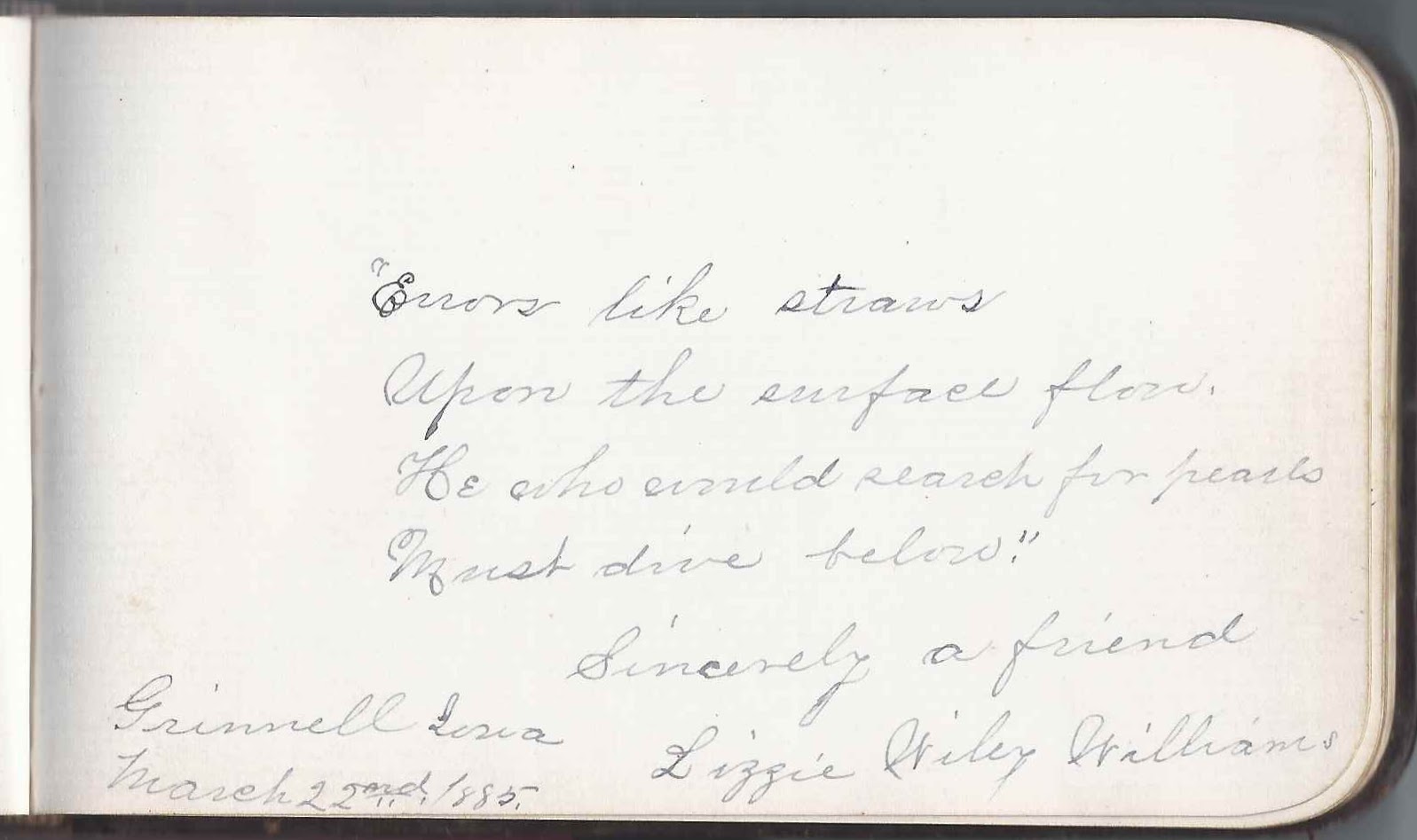 Hepzibah's other sister, Jemima Dumville, married James Henry Holme.  They and their children were living at Benton, Missouri, at the time of the 1880 Census.  I believe the J. D. Holme who signed a page at Savannah, Iowa, on September 15, 1885, was Jemima (Dumville) Holme.  Among the other people named Holme who signed in the album was E. D. Holme, who was  presumably Jemima's son Edward Dumville Holme, apparently not yet a doctor.  He also signed a page in the other album. 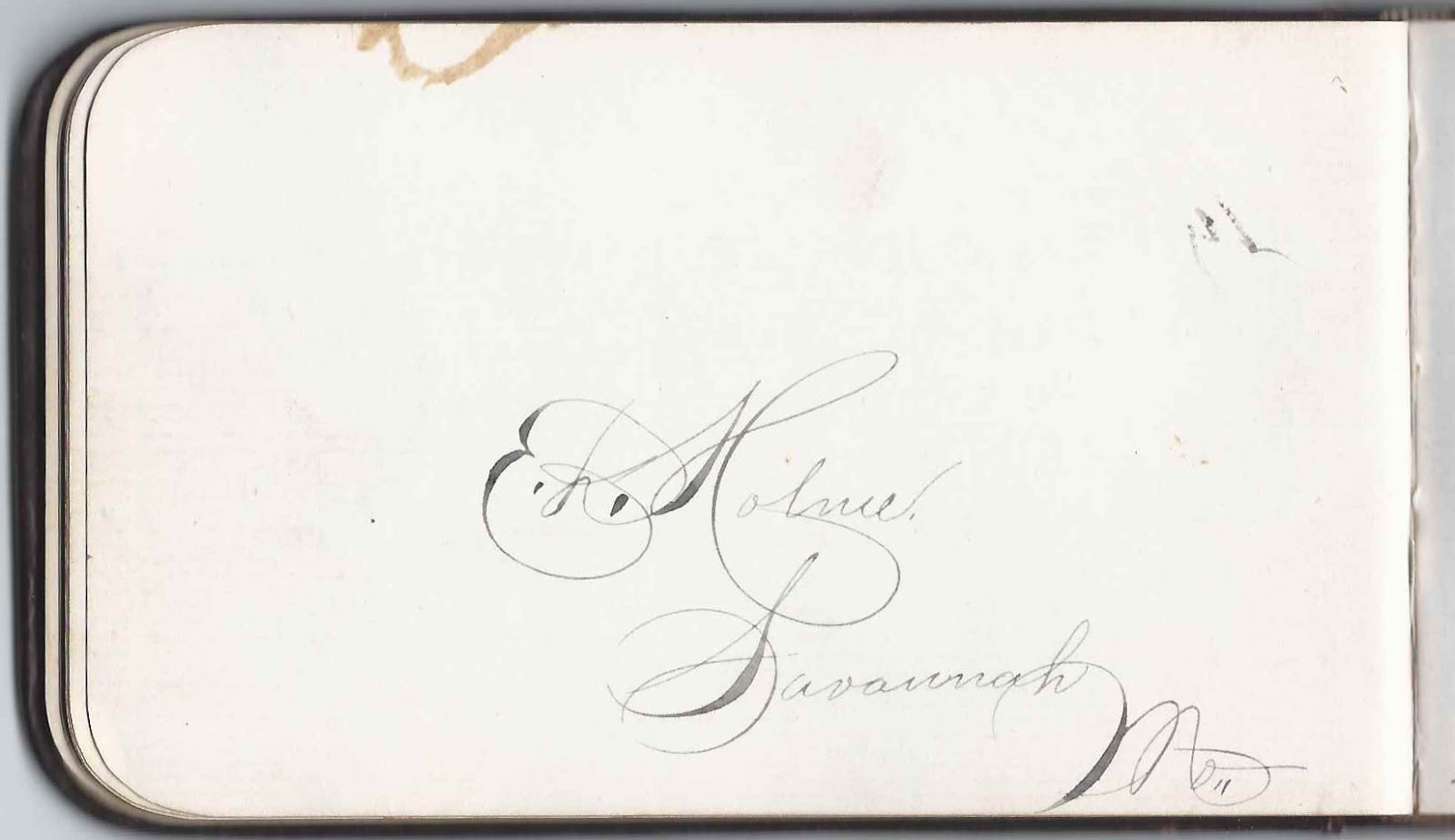 On February 2, 1907 at Denver, Colorado, Mary Elizabeth Bechly married Joseph Perry Bankson, son of James M. and Mary Jane (Blankinship) Bankson.  They farmed at Clarkston, Washington, and had at least one child, a daughter, born about 1914.  Joseph died in 1955, and Mary in 1956.

Surnames in the album    [Note: Given names within a specific surname may not be in alphabetical order.]

Posted by Pam Beveridge at 4:00 PM