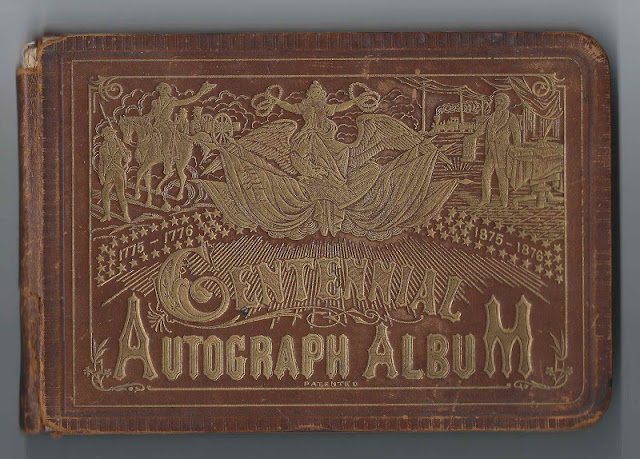 1876-1881 autograph album that belonged to Martha Ellen Waters, or as she preferred, at least in her youth, Nellie M. Waters, of Cincinnati, Ohio, with most pages inscribed by her fellow students at Cincinnati Normal School.

The album was published by Ed. W. Welcke & Brother of 176 William St., New York.  It's the "Centennial Memorial" album and includes two pages of the Declaration of Independence and three pages of images the signatures of the signers of same. 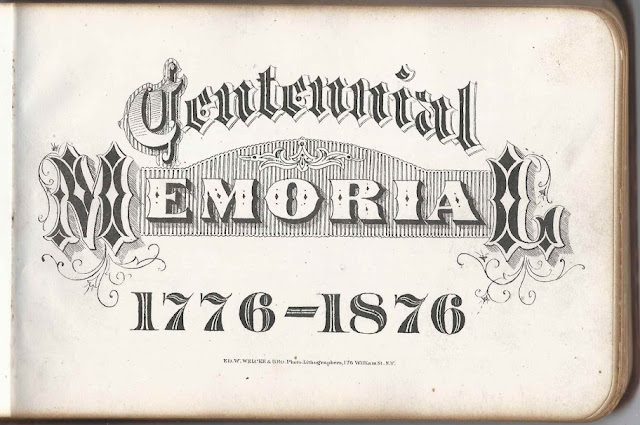 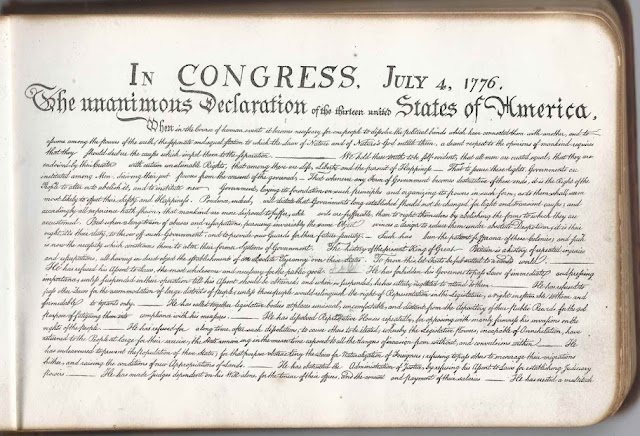 The album is approximately 7-3/4" x 5-1/4" and contains the sentiments of 41 of Nellie's relatives, friends and schoolmates.  An alphabetical surname list and alphabetical list of the signers, with any personal information they added, appear at the end of this post.

Martha Ellen Waters, "Nellie", was born about January 1859 in Maine, possibly at Winthrop, the daughter of Jabez Mathews Waters and Martha Ellen (Webb) Waters, who were born at Waterville, Maine, and Winthrop, Maine, respectively.  The family moved to Cincinnati, Ohio, where Jabez was a prominent businessman, inventor and school board member.

Two of Nellie's brothers signed pages in her album.  George Mathews Waters signed a page at Westwood, Cincinnati, Ohio, on January 1, 1881.  He was born 22 May 1861 at Cincinnati, Ohio, and married Julia Kiechler in 1890.  They moved to Indiana and were involved in the lumber manufacturing business. 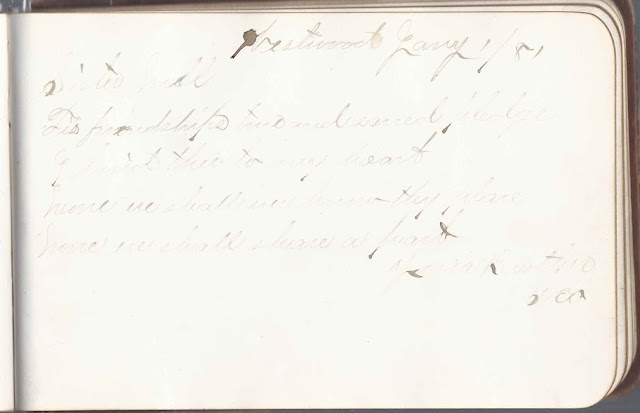 Nellie's brother Frederick J. Waters signed the last page in the album.  He was born 16 December 1869 at Cincinnati, Ohio, and became an educator/administrator in Washington state. 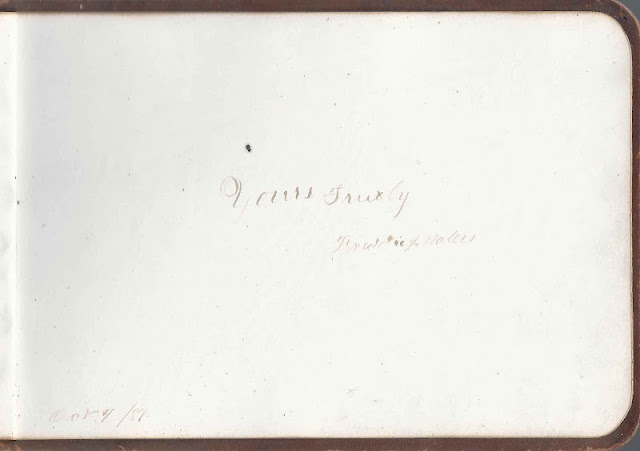 Frederick's photograph from his passport. 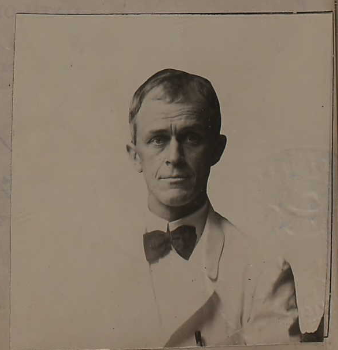 Nellie's older brother, educator and school administrator William Everett Waters, born 20 December 1856 at Winthrop, Maine, did not sign a page in her album, but, interestingly, his future wife did.  Alma Filia Oyler, daughter of George Washington Oyler and Caroline (Pruden) Oyler, was Nellie's schoolmate, at least at Hughes High School in Cincinnati, Ohio, if not also at Cincinnati Normal School.  Perhaps William and Alma met as a result of Alma's friendship with Nellie.  They married June 28, 1888. 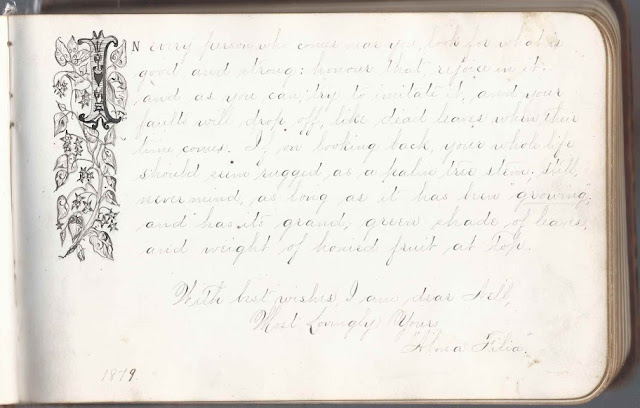 Another interesting signer in the album was Nellie's future husband Lewis Francis Phipps, born at Cincinnati, Ohio, on 18 January 1852, son of William and Lydia (Reynolds) Phipps.  They would marry 8 June 1882 and make their home at Cincinnati, Ohio, where Lewis was a merchant and manufacturer. 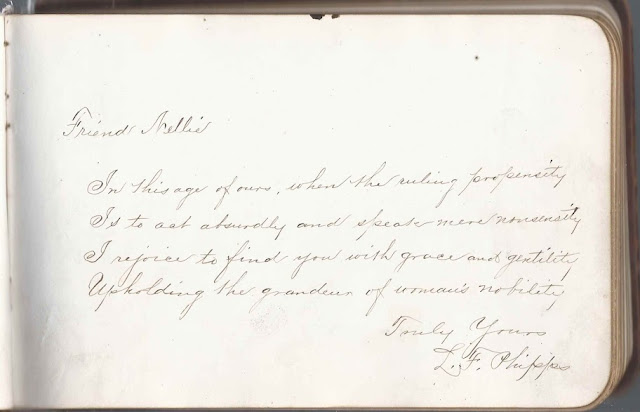 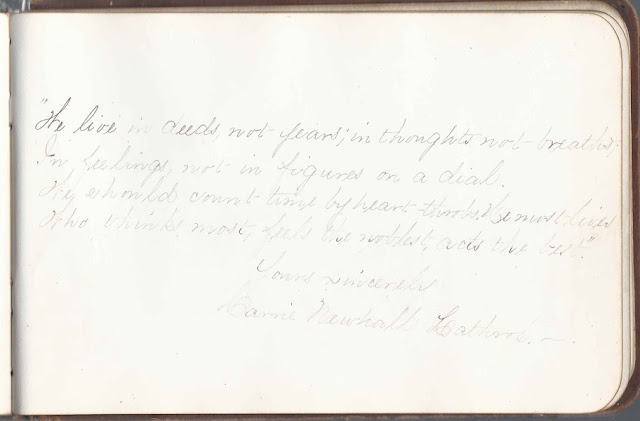 Three women named Webb, possibly related to Nellie through her mother Martha Ellen (Webb) Waters, shared a page inscribed in October 1876 with three others.  If these were relatives, perhaps Nellie had taken a trip East, or the five signers a trip West.  The signers were Annie Webb; Fannie D. Webb; May E. Webb; Frank W. Prince, who mentioned the Webb Museum at Winchester, Massachusetts; Alice D. Nason; and H. F. S. Wood. 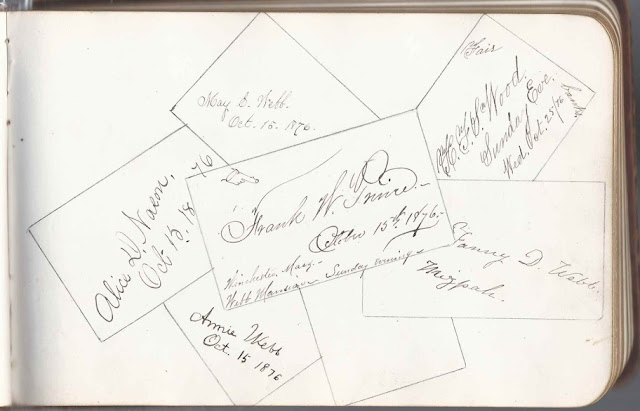