1870-1904 Autograph Album of Ida May Gray of Boston, Massachusetts; Before and After her Marriage to Alexander Dunn 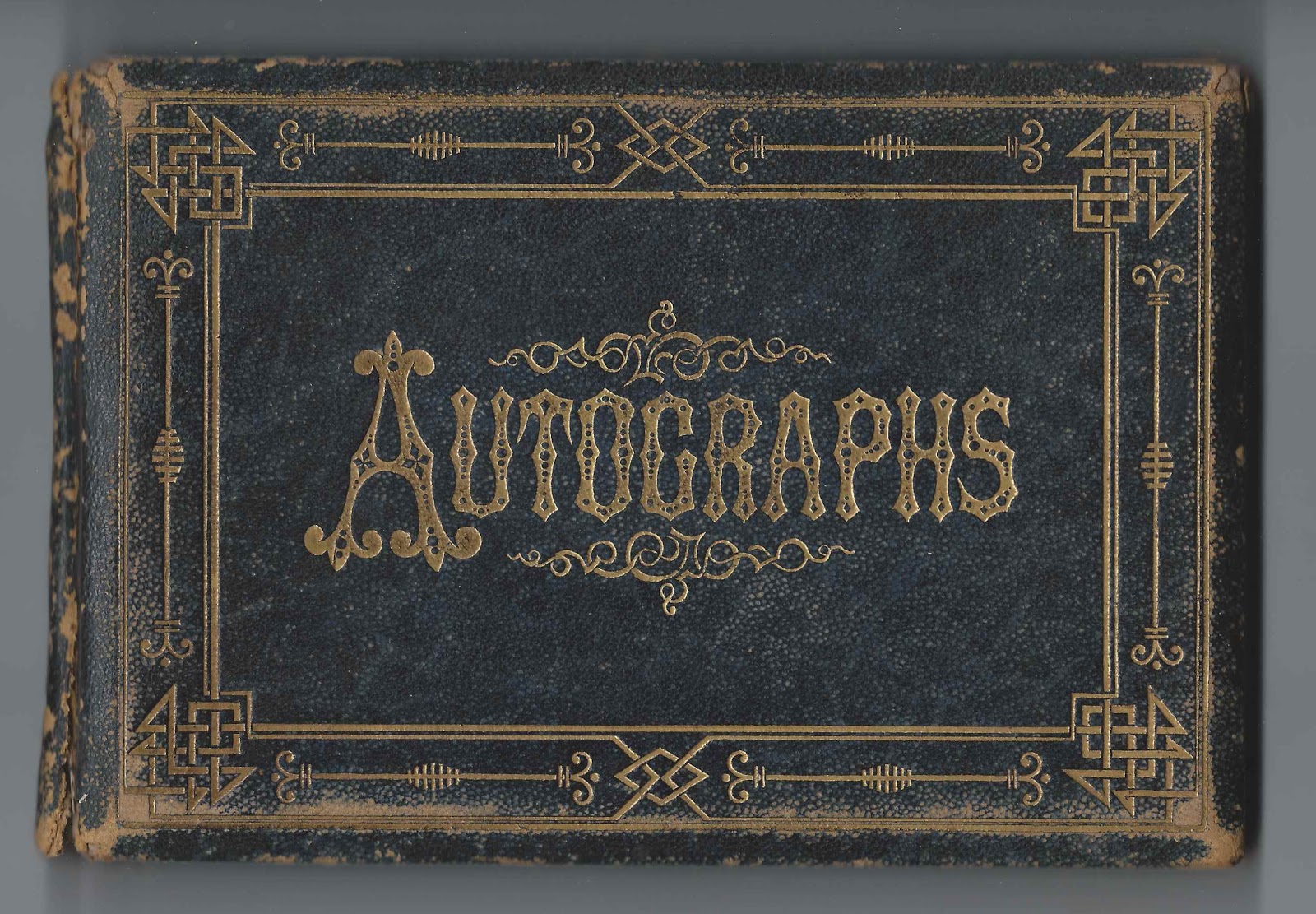 1870s autograph album of Ida May Gray, before and after her marriage to Alexander Dunn.

Incidentally, the album was purchased with another album from the Boston, Massachusetts, area that belonged to a "Ria" and featured pages signed by Ida's younger brother Edgar Elmer Gray and younger half-brother Milford Ernest Somes.  One of Ria's parents was presumably the son or daughter of Jesse and Mary Salmon of New York and Boston, as Maria J. Salmon of Charlestown, Massachusetts, called Ria her niece.  I haven't yet teased out the connection between the two albums; hopefully a reader can solve the mystery.

Ida's album may have been a Christmas or New Year present; the first page was inscribed by her brother William Ellery Gray in January 1876.  His future wife Anna E. Newmarch also signed a page. 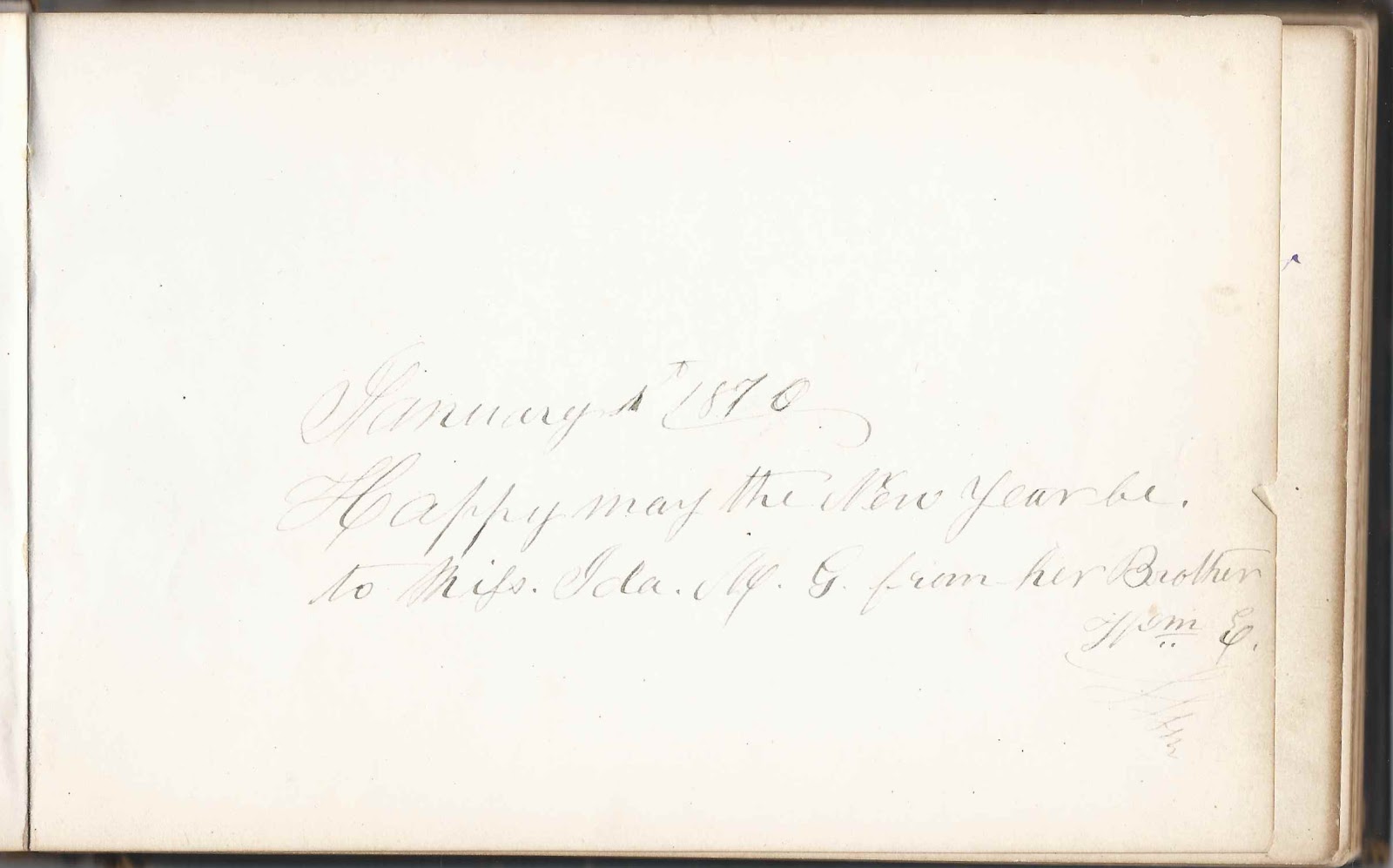 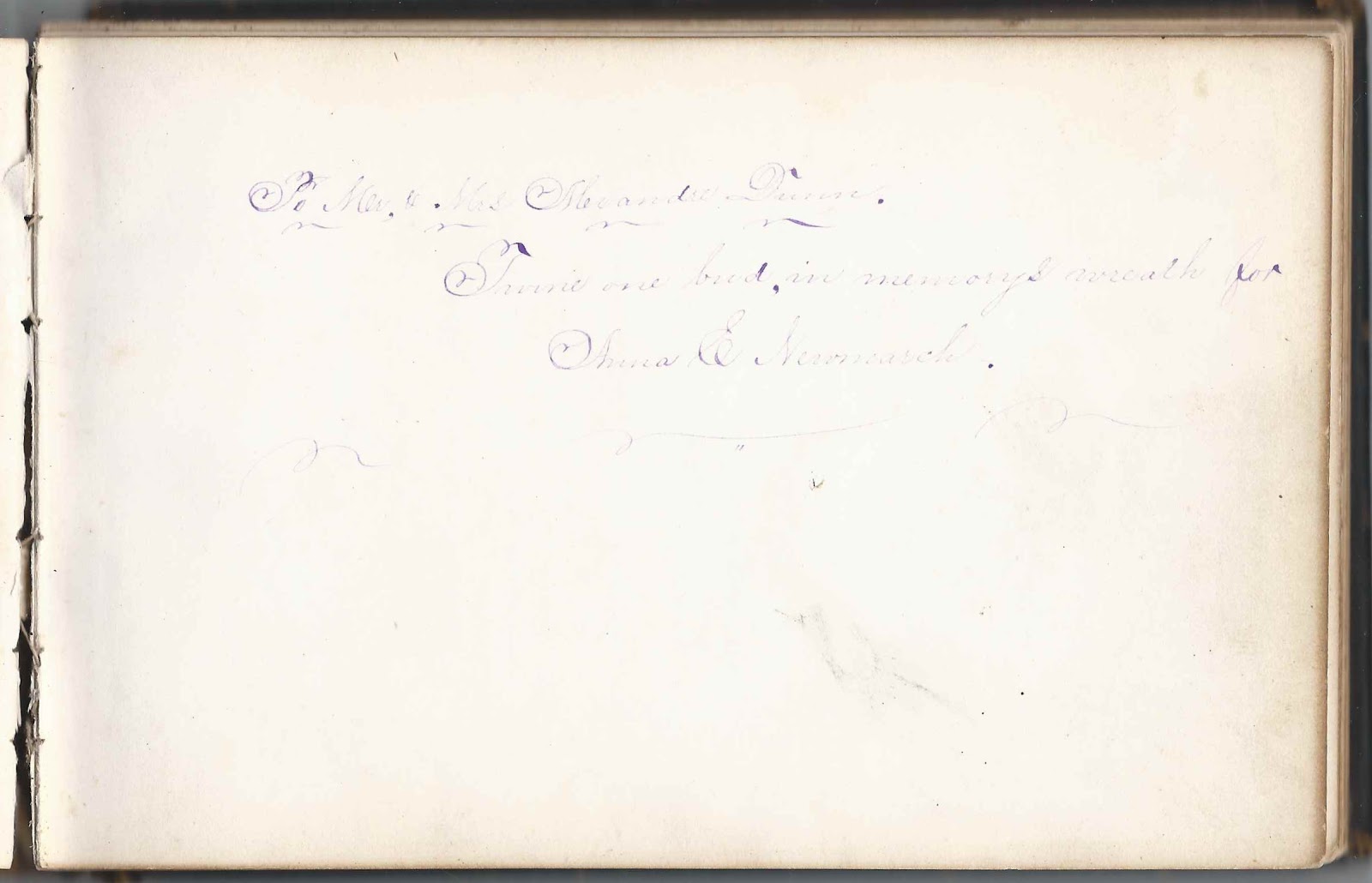 The album is approximately 8" x 5-1/4" and contains the sentiments of 26 of Ida's relatives and friends.  An alphabetical list of the signers appears at the end of this post. 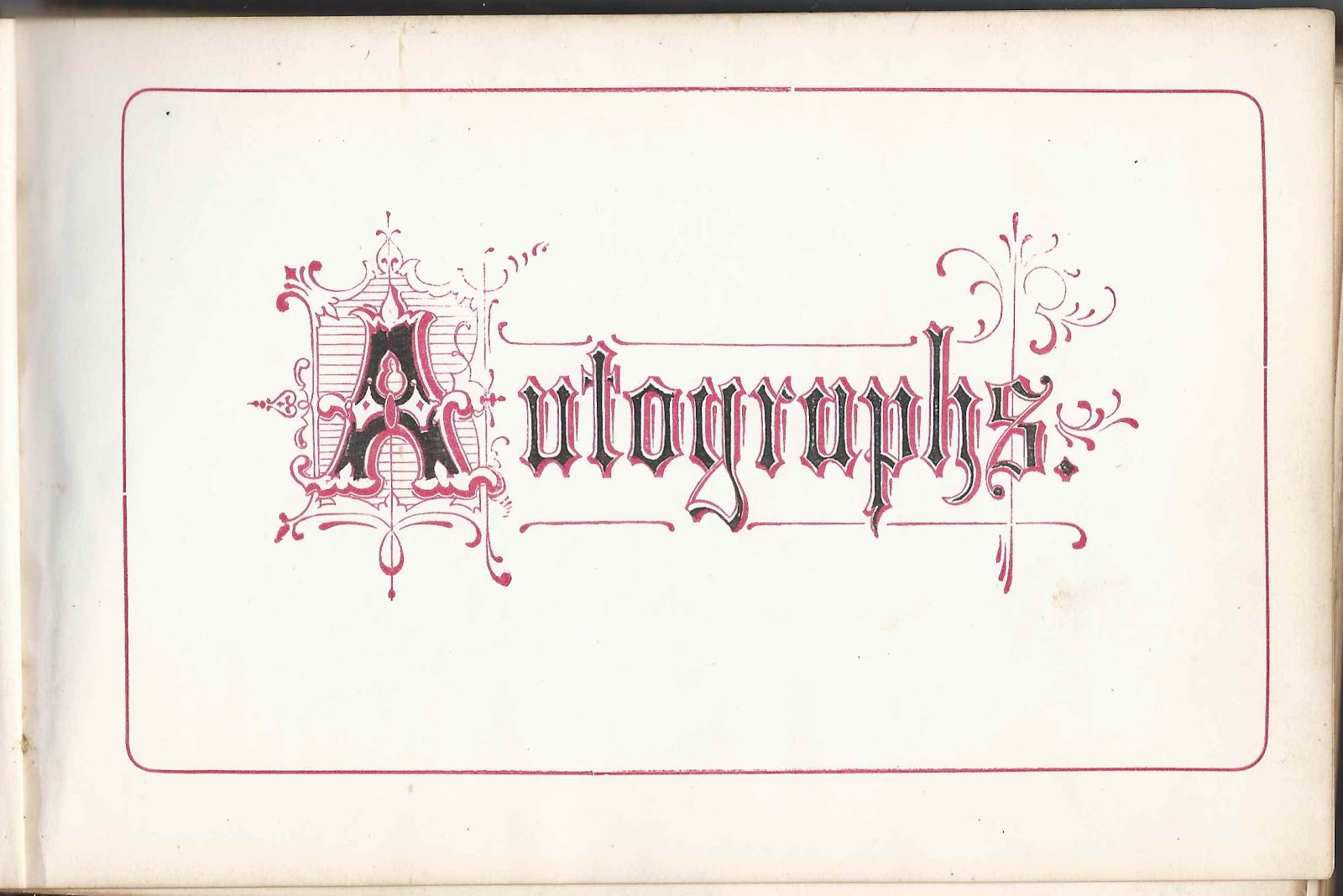 Both of Ida's parents had children from other marriages, so Ida had older and younger half-siblings, as well as four full siblings.  Charles A. Gray, Ida's older half brother, from her father's first marriage to Sophia (Hersey), signed a page twice, once on August 26, 1890, and again on July 2, 1904, the last date of an autograph in the album. 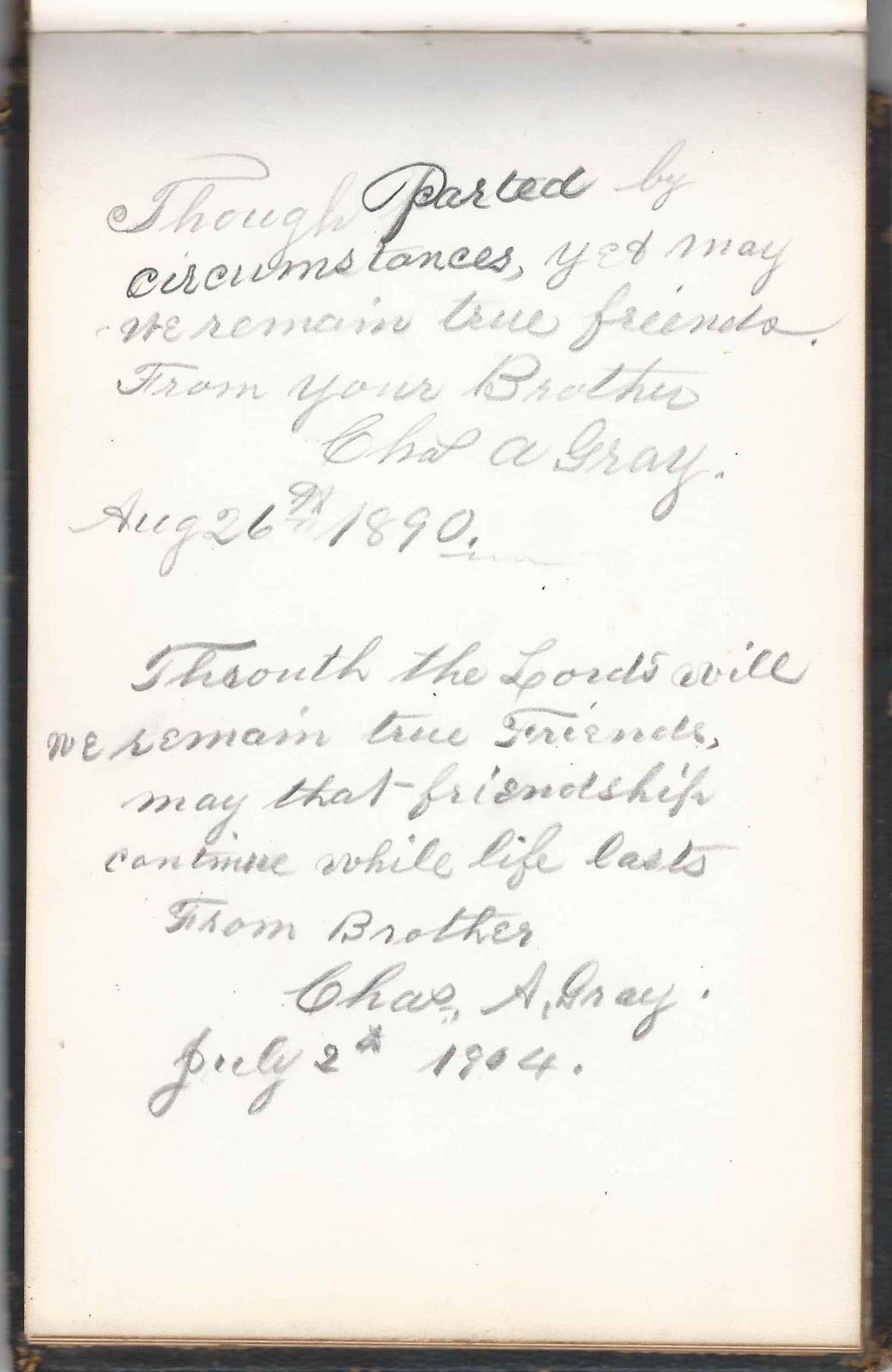 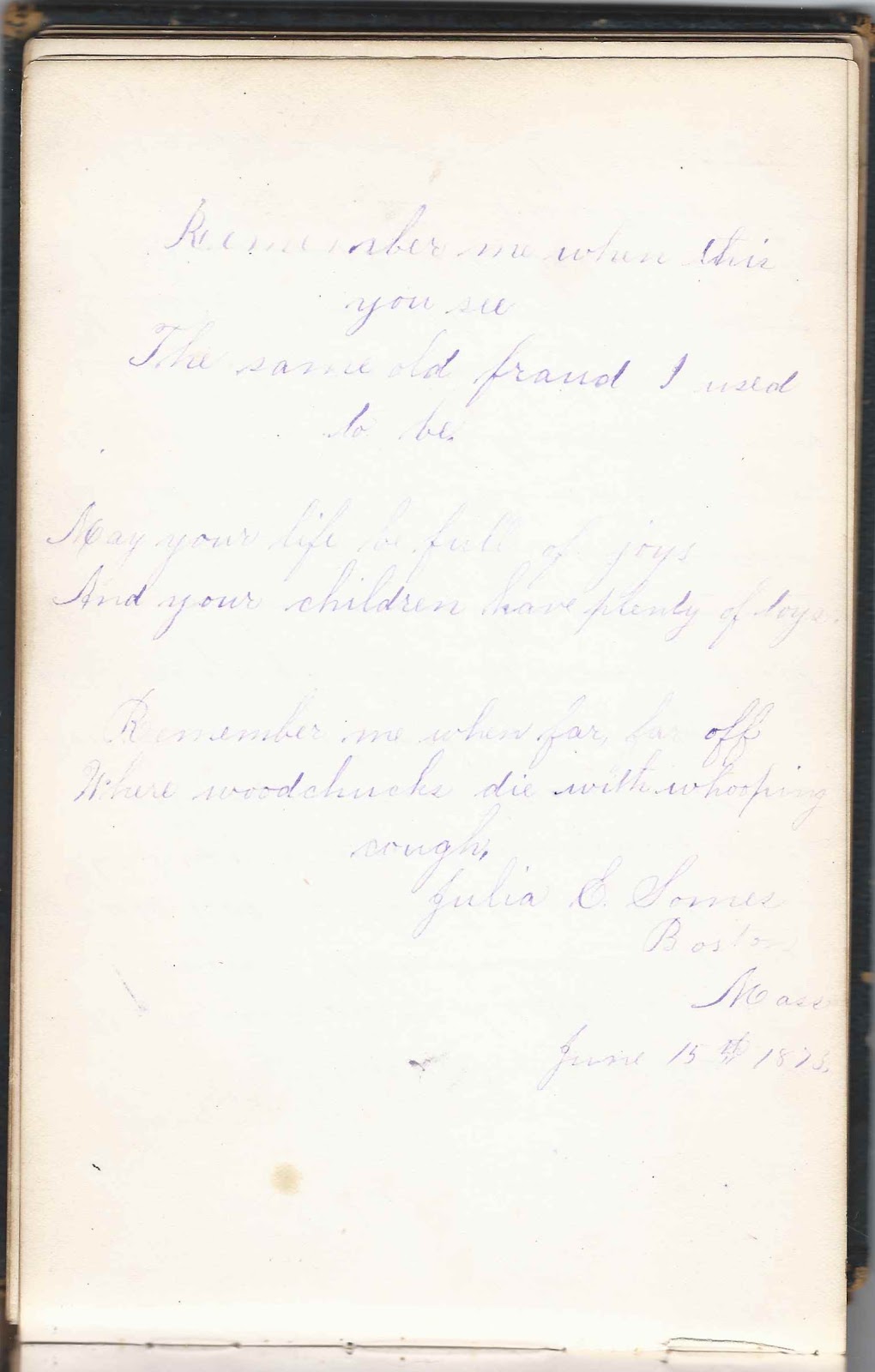 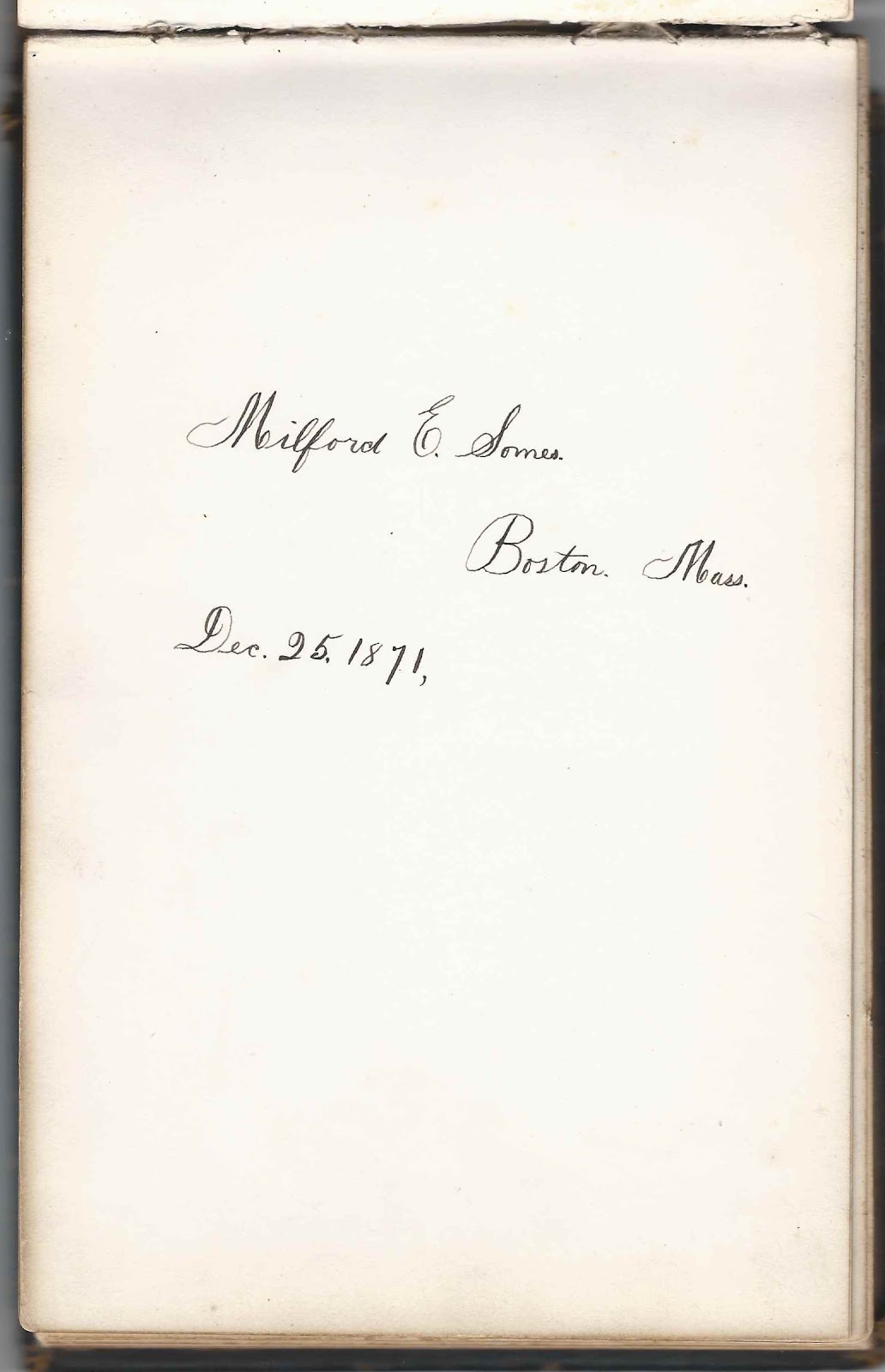 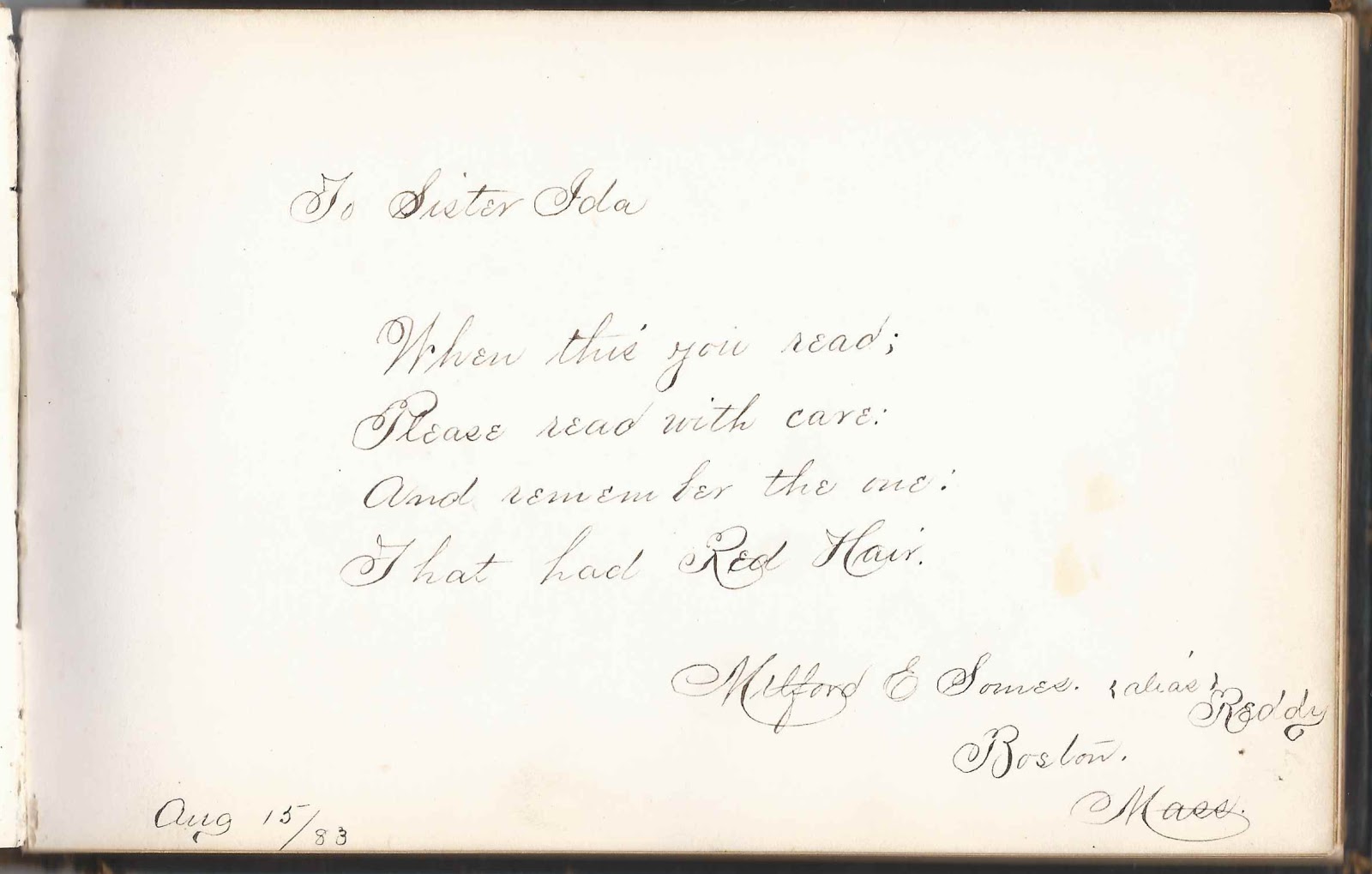 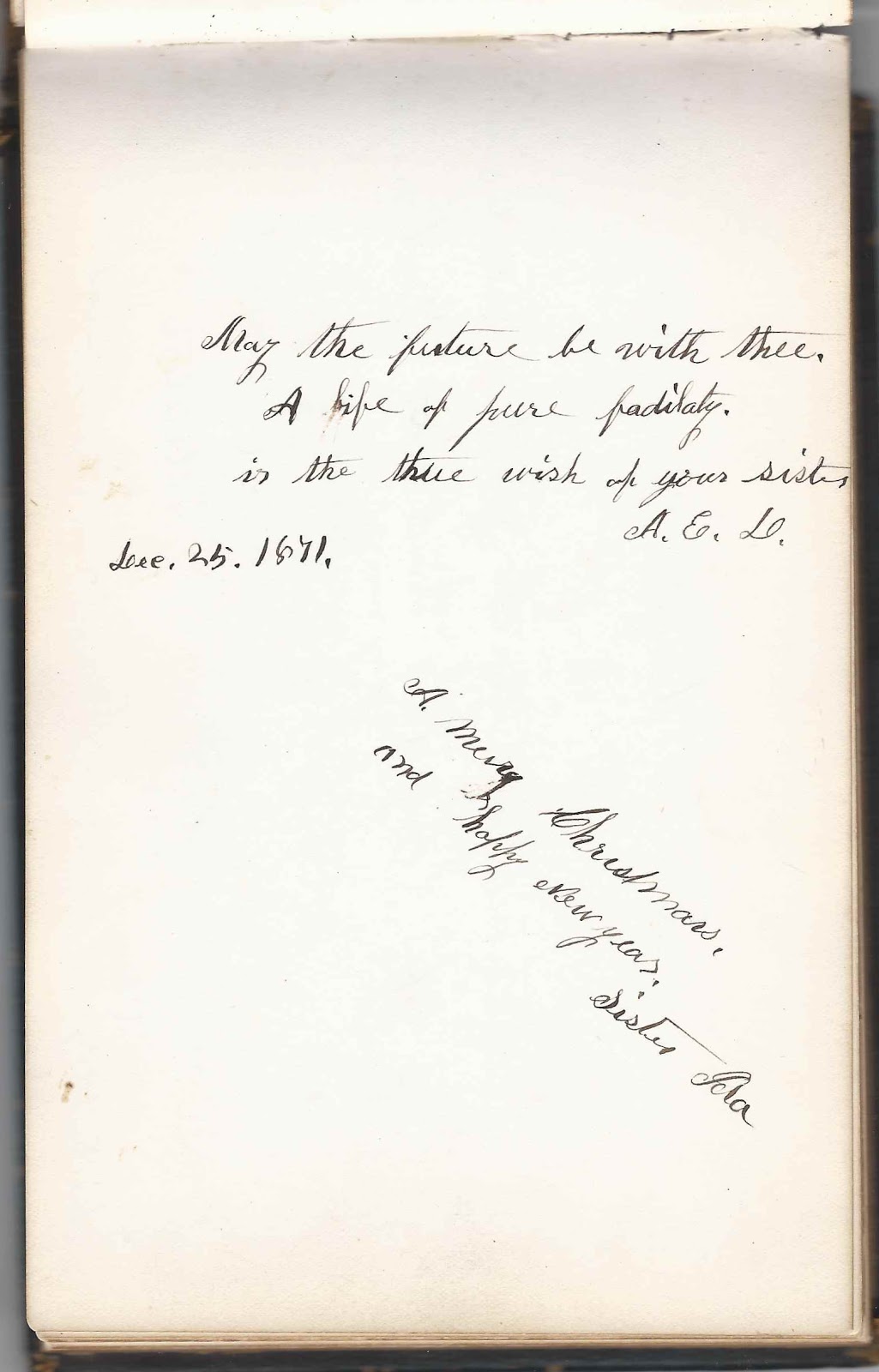 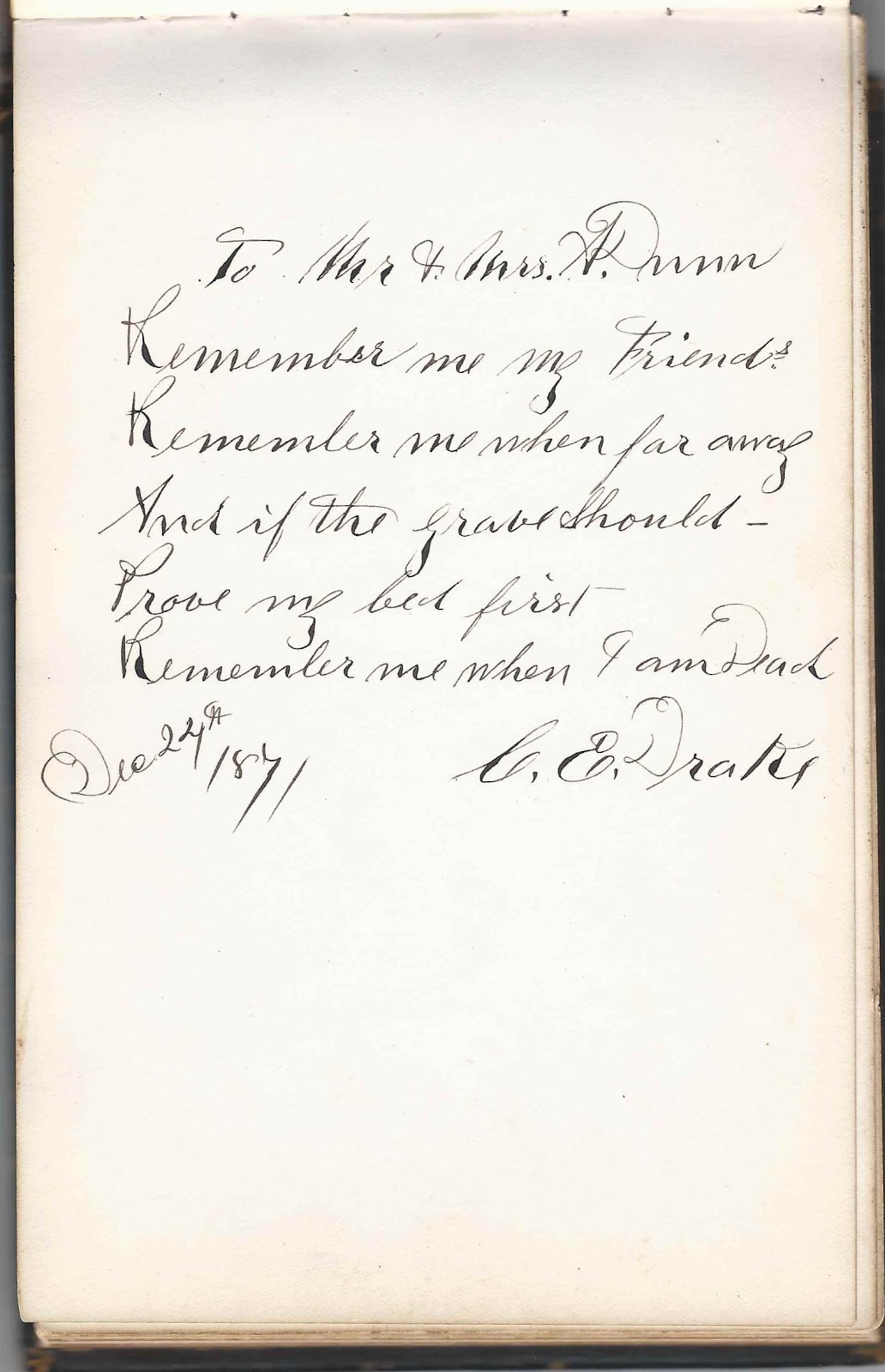 Ida's brother Edgar Elmer Gray didn't sign a page in this album, but he did sign one in the companion album mentioned above, at Boston, Massachusetts, on May 20, 1876. 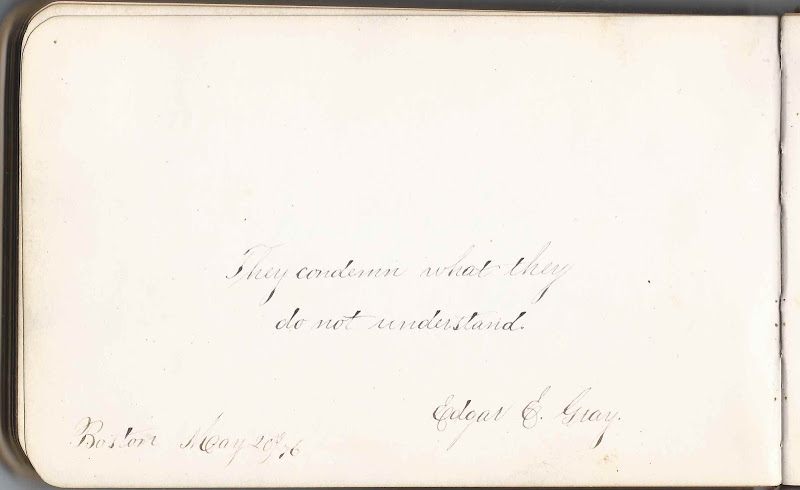 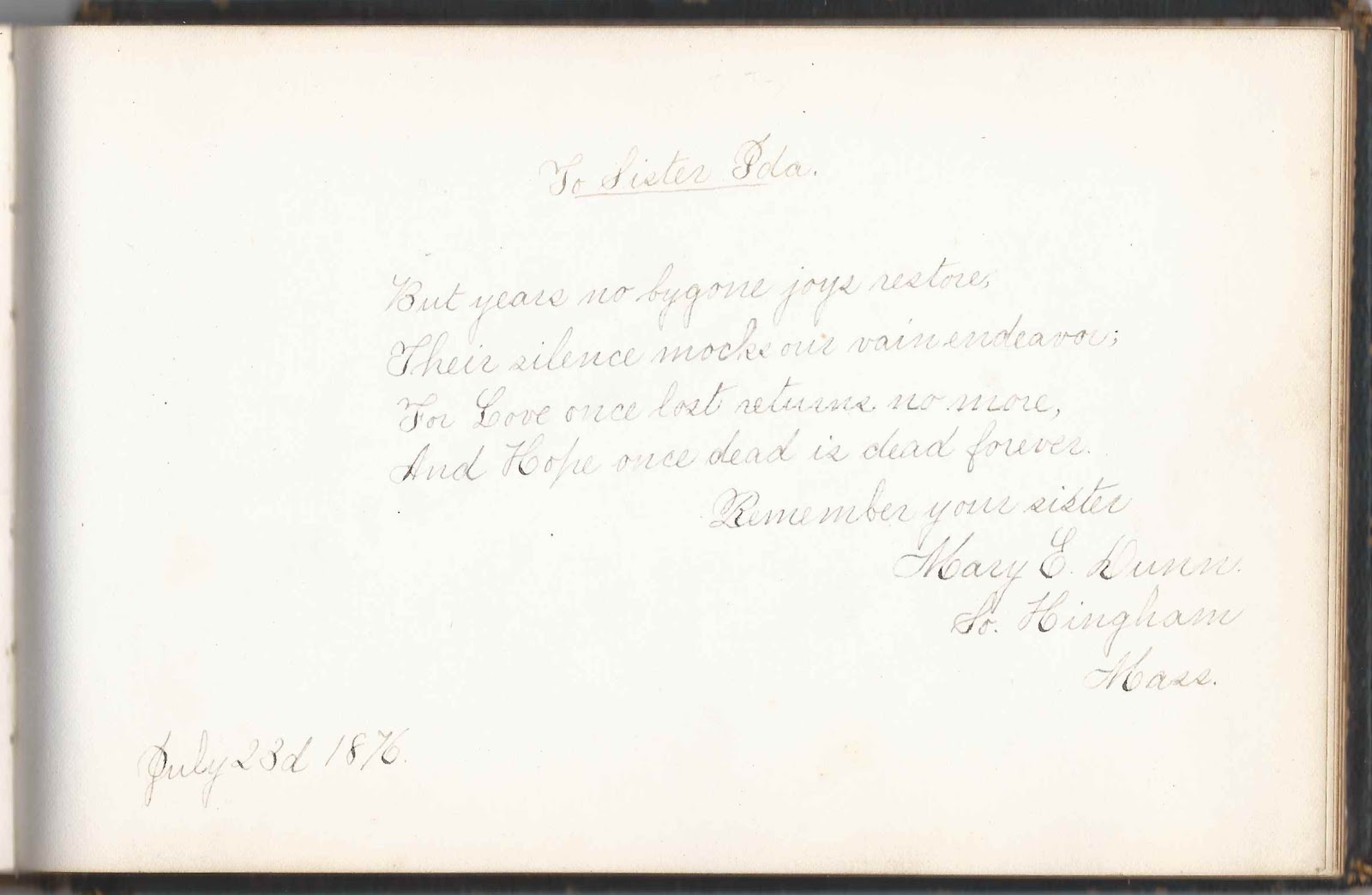 Ida and Alexander had, I believe, three sons: though I noticed a reference online to a daughter Alice, I couldn't find a record of her:

Alexander, a machinist, died in 1917; Ida died in 1934.  If you have corrections and/or additions to the information above, or information on any of the signers listed below, please leave a comment or contact me directly.

One interesting page contained a sketch presumably done by signer Hattie Clifford at Christmas in 1871. 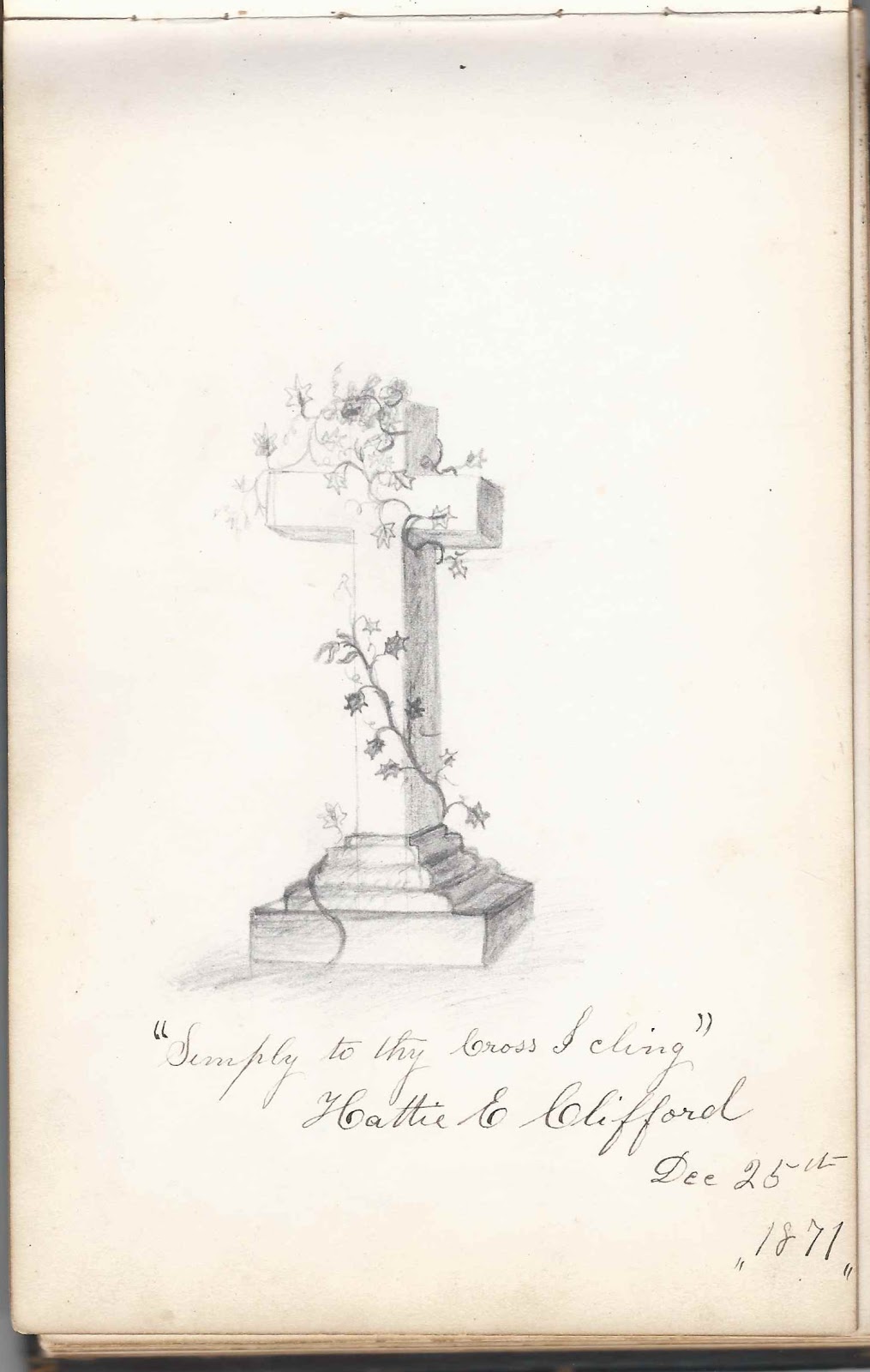 Posted by Pam Beveridge at 2:50 PM