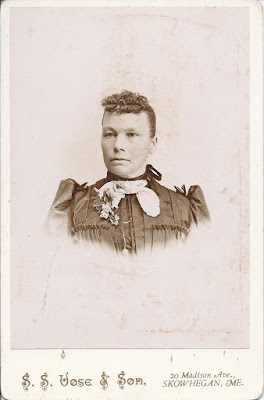 Cabinet photograph taken by the S. S. Vose & Son studio of Skowhegan, Maine, of Gussie Willey, who was Augusta E. (Barron) Willey Turner.  She married John Turner in 1892 so the photograph was most likely taken before that year. 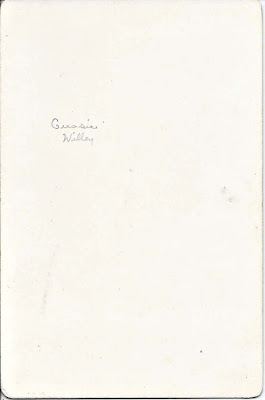 Augusta E. Barron was born 16 December 1846 at Harmony, Maine, according to marriage record and death records.  Her parents were George Washington Barron and Betsey P. (Savage) Barron, who were born at Embden, Maine, and Anson, Maine, respectively.

Gussie and her first husband, Osgood Eaton Willey, filed a marriage intention at Dexter, Maine, on 21 December 1862.  Oswood was born 3 December 1841 in Maine, most likely in the Skowhegan/Bingham area, the son of John and Susan (Cummings) Willey.

As far as I know, Gussie and Osgood had four children:


On the Fourth of July 1878 the family celebrated by swimming along the Kennebec River at Skowhegan.  One of the boys, Charles, I think, got out beyond his depth and perhaps got caught by the current.  His father Osgood Eaton Willey attempted in vain to rescue him and also drowned in the attempt.

I can only imagine the shock and grief that befell Gussie that day.  It's likely that she witnessed the tragic event and felt helpless and torn back on the river bank with her younger children.

There's a brief mention of the tragedy in the Stevens Point Daily Journal of Stevens Point, Wisconsin, in the issue of Saturday, 13 July 1878.

On 25 June 1892, Gussie married Skowhegan farmer and lumberman John Turner, son of Asa and Betsey (Farnham) Turner.  John was born about February 1811 at Belgrade or Rome, Maine, and had been married twice before.

If you have corrections and/or clarifications to the information above, please leave a comment or contact me directly.  Thanks!