1870s-1892 Autograph Album that belonged to an Ida, perhaps of Beverly, Massachusetts; and perhaps a Telegraph Operator for Eastern Railroad 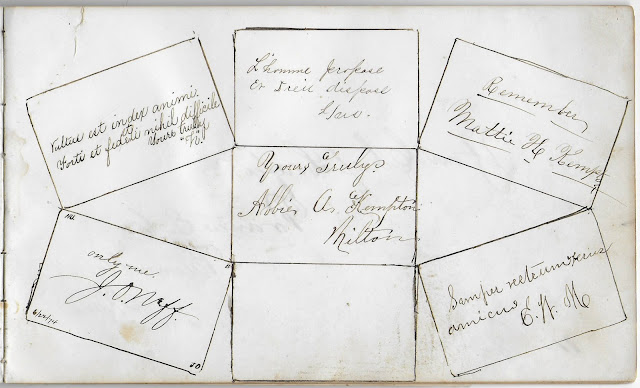 1870s-1892 autograph album that belonged to an Ida, perhaps an Ida from Beverly, Massachusetts, and presumably a telegraph operator for the Eastern Railroad. Ida may have been a member of the Webber family of Beverly, Massachusetts.
The album is in poor condition, with missing covers and perhaps some missing pages. It measures approximately 8" by nearly 5" and contains the sentiments of at least 42 of Ida's coworkers and friends.  An alphabetical list of the inscribers, together with any personal information they offered, appears at the end of this list.
Some inscribers mentioned shared adventures, too lengthy to share here.
Surnames in the Album
Many of the inscribers gave indication that they were telegraph operators with the Eastern Railroad, from 109 State Street in Boston, to Conway Junction in Maine, presumably in South Berwick, Maine, although the railroad itself extended all the way to Portland, Maine.
If you have information to share on the Eastern Railroad or any of the people mentioned here, please leave a comment for the benefit of fellow family historians.
Inscribers in the Album
Posted by Pam Beveridge at 10:59 AM