The Maine Customs Offices derived from A STATEMENT of contracts and purchases made by collectors for the Revenue Service, during the year 1817, extracted from their accounts for that year.
In the years just before Maine Statehood, achieved on March 15, 1820.
Lemuel Trescott (1751-1826), Passamaquoddy *
Contractor, Otis Childs
Jeremiah O'Brien (abt 1744-1818), Macias [Machias]
Contractor, D. Elliot
Meletiah Jordan (1753-1818), Frenchman's Bay
Contractor, Thayer & Peters
Joshua Wingate (1773-1843), Bath
Contractor, Haskell & Nash
1 sick seaman at $1.25 per week; physician's charges: $76.63
Isaac Ilsley (1764-1853), Portland
Contractor, M. S. Gordon
24 sick seamen, with care provided in private houses from $2 to $3 per week; physicians charges for care and medicine, $89.05
Joseph Storer (1757-1833)**,  Kennebunk
Contractor, John Frost
* Passamaquoddy would presumably have meant Lubec, Maine, as Eastport was still under the control of the British, who had captured it in 1814 and would not vacate until June 1818 after several years of further negotiations following the conclusion of the War of 1812.
** FindaGrave Memorial shows birthplace as Weld, Franklin County, Maine; should be Wells, York County, Maine
If you have information on the contractors listed, please leave a comment or contact me directly.
Appearing in this booklet printed by the US Government in 1819, entitled "99" Letter from the Secretary of the Treasury, transmitting Statement of Payments Made According to Law, at the Treasury During the Year 1818" 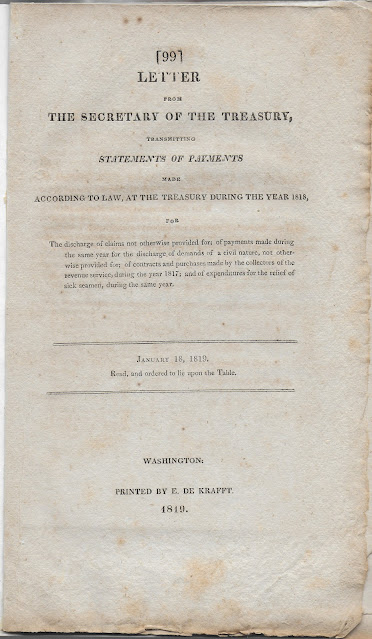 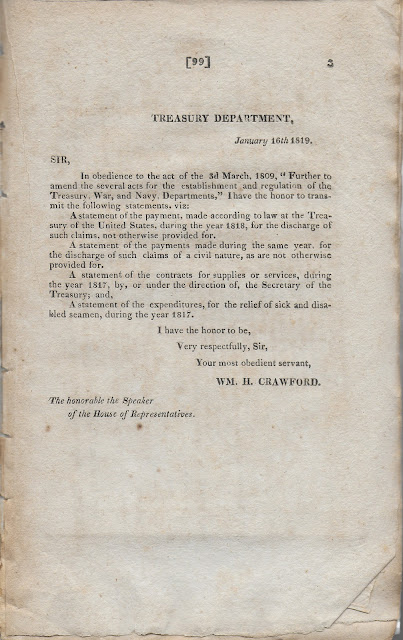 The booklet lists payments to many people, mostly professionals, and mentions payments on behalf of sick seamen, but, sadly, does not name them.
Maine as it appears in an 1820 map, more than two decades before the border was finally settled. 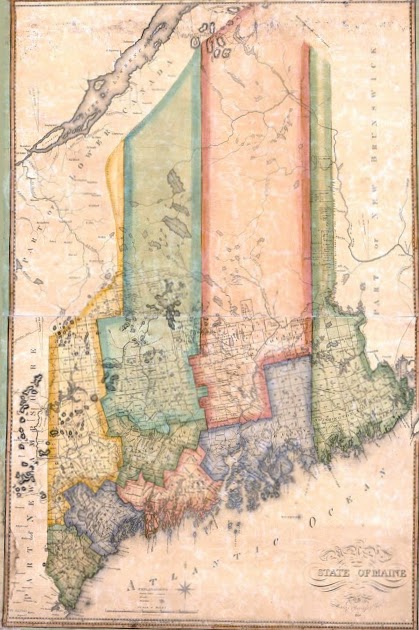 Maine today:
Posted by Pam Beveridge at 7:28 AM