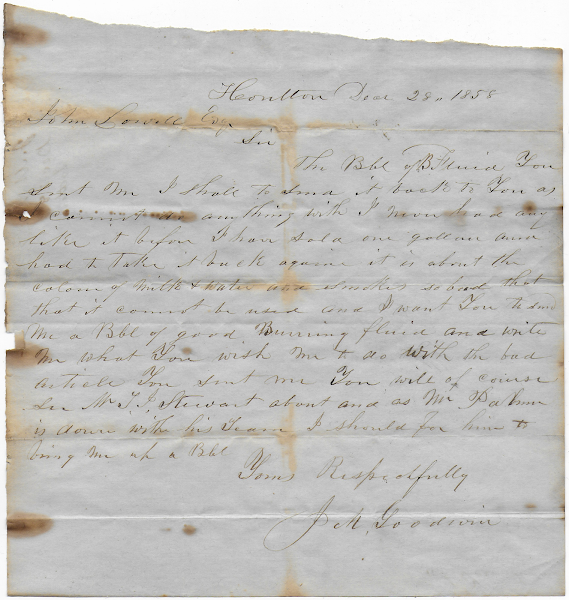 1858 Letter from J. M. Goodwin at Houlton, Maine, to John Lowell, Esq., reporting a bad barrel of burning fluid and asking what should be done with it and asking for a replacement barrel.
The bad barrel might have come to Goodwin's business from wholesalers in Bangor, Maine, or Woodstock, New Brunswick. 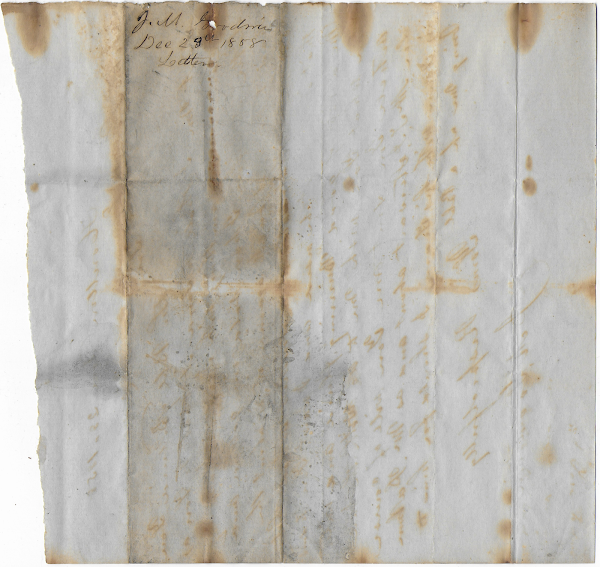 J. M. Goodwin was presumably Houlton, Maine, trader and saw mill owner James M. Goodwin.
This James M. Goodwin was born in St. Stephen, New Brunswick, about 1814 and was in Houlton at least by the time of the 1850 Census. In 1856, he was listed as a member of the militia and as a coroner for Houlton, as shown in the Aroostook County section of the 1855 and 1856 issues of the Maine Register.
See an article in the 1957 Houlton Pioneer Times which contains snippets from the 1857 issue, including one on the offerings of merchant J. M. Goodwin, in the fourth column about halfway down the page and in a bolder type.  He was presumably the James M. Goodwin (-1859), who would die at the age of 48 about six months after this letter was written.
Transcription
Houlton Dec 28, 1858
John Lowell Esq.
Sir
The Bbl of B [burning] Fluid You Sent Me I shall to send it back to You as I cannot do anything with. I never had any like it before. I have sold one gallon and had to take it back again. It is about the colour of Milk & Water and Smokes so bad that that [sic] it cannot be used and I want You to send me a Bbl of good Burning fluid and write me what You wish me to do with the bad article You sent me. You will of course See Mr. T. I. Stewart about and as Mr. Palmer is down with his Team I should for him to bring me up a Bbl.
Yours Respectfully
J. M. Goodwin
John Lowell, Esq. may have been the John Lowell in Bangor, Maine, in the 1850s and beyond, who gave his occupation as teamster in the 1850 and 1860 Censuses.
The letter also mentions Mr. T. J. [or I.] Stewart and Mr. Palmer.  Stewart may have been merchant Thomas Jefferson Stewart (1823-1890) of Bangor, Maine.  Read more about him here in an article that described him as a "towering figure in Bangor commerce".
From the phrase as Mr. Palmer is down with his Team I should for him to bring me up a Bbl. , it would appear that Mr. Palmer was living near letter writer J. M. Goodwin.
Perhaps John Lowell and Palmer were part of Stewart's distribution network.
If you have information on any of the men mentioned in this letter, please leave a comment or contact me directly.
Posted by Pam Beveridge at 8:27 AM