1893 Photograph of a Field Owned by Charles Wright of Swanville, Maine; with Extensive Writing on Reverse 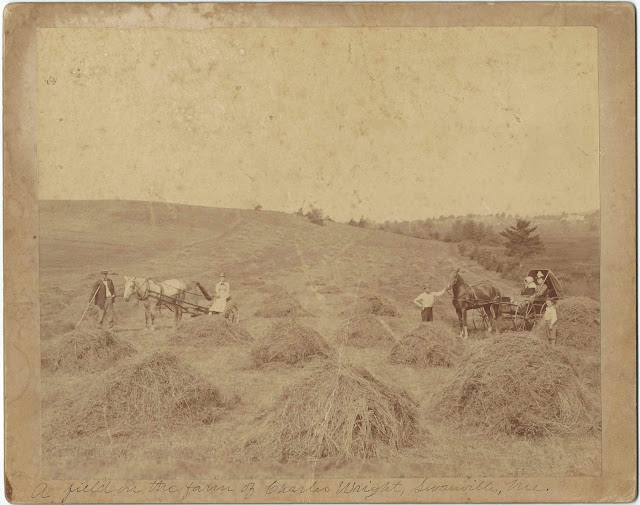 On the reverse: "Charles Wright sold to George Woods 1914. George Woods sold to Leon Webster 1921".  "Woods" might have been "Wood", as some records show a George Wood living in the area.

The reverse also has information on how Mr. Wright brought the field back into production in 1891 with the application of 800 lbs of Stockbridge Seeding Down Manure. 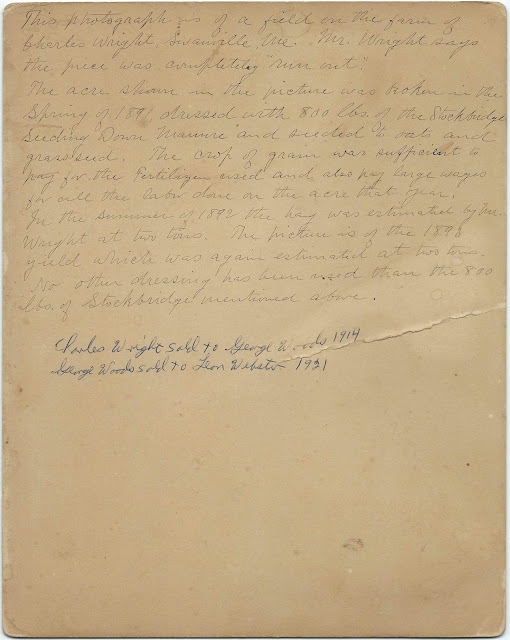 "This photograph is of a field on the farm of Charles Wright, Swanville, Me. Mr. Wright says the piece was completely 'run out'.
"The acre shown in the picture was broken in the Spring of 1891, dressed with 800 lbs of the Stockbridge Seeding Down Manure and seeded to oats and grass seed.  The crop of grain was sufficient to pay for the Fertilizer used and also pay large wages for all the labor done on the acre that year.
"In the Summer of 1892 the hay was estimated by Mr. Wright at two tons. The picture is of the 1893 yield which was again estimated at two tons.
"No other dressing has been used than the 800 lbs of Stockbridge mentioned above."

The record for Charles E. Wright in the J. Gary Nichols Cemetery Collection, ca. 1780-1999 shows that his father Hiram was "Born Strong, Maine".  Charles and his parents are buried in the Grove Cemetery at Belfast, Maine.

Hopefully a reader will have a theory as to the identity of George Wood(s).

Leon Webster was presumably Leon Russell Webster (1895-1959), who, by the time of his purchase of the field in the photograph, had married Helen May Wyman.  Leon and Helen are also buried in the Grove Cemetery at Belfast, Maine.

If you have information on any of the people mentioned in the photograph, please leave a comment or contact me directly.