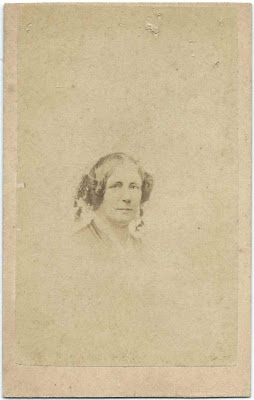 Circa 1860s/1880s Carte de Visite of a woman identified on the reverse as Mrs. Mary An Locke of Plymouth, Massachusetts.  Whether her middle name was An and not Ann, I don't know. 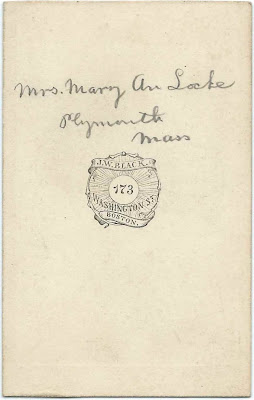 That Mary Ann was born March 11, 1809 at Billerica, Massachusetts, where her father had a legal practice.  Read more about Mary Ann's father, Judge Joseph Locke, here, in "Book of the Lockes. A genealogical and historical record of the descendants of W. Locke, of Woburn. With an appendix, containing a history of the Lockes in England, also of the family of J. Locke of Hampton, N. H., and kindred families and individuals", published by John Goodwin Locke in 1853.

According to Massachusetts Deaths 1841-1915, Mary Ann (Locke) Locke died August 20, 1873 at Plymouth, Massachusetts.  Albert had predeceased her in 1840.  A mention of Albert in "Descendants of Francis Le Baron of Plymouth, Mass", published by M. Le Baron Esty Stockwell in 1904, shown below, has the wrong death year for Mary Ann.

Mary Ann (Locke) Locke and Albert Locke had one child, a son Joseph Albert Locke, born, according to the excerpt above, on October 31, 1839.

If you have corrections to the information above or if you feel that Mrs. Mary An Locke is another person, please leave a comment or contact me directly.

Posted by Pam Beveridge at 4:47 PM