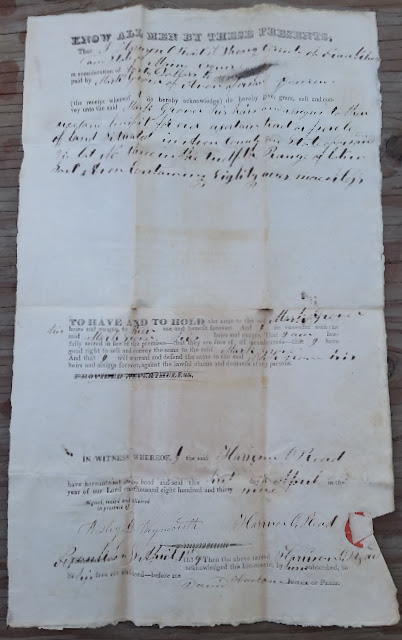 The deed was witnessed by Wesley D. Weymouth and was signed in the presence of David Harlow, Justice of Peace.

Harrison Ormond Read married Eunice Hitchcock, who was born at Damariscotta, Maine, about 1816, daughter of Benjamin and Violet Hitchcock, according to her Massachusetts Death Record.  Eunice was still at 33 Fayette Street, when she died on March 2, 1886.

Mark Grover was presumably the Mark Grover born about 1788 in Maine.  He died September 16, 1862 and is buried in the Pease Cemetery at Avon, Maine, with his wife Sarah (Bubier) Grover, "Sally", who had predeceased him in 1860.  It's possible that Sarah is the Sarah Bubier born June 10, 1792 at Bowdoin, Maine, but I haven't found a definitive source.

Wesley Dyar Weymouth was born about 1815 in Lisbon, Maine, son of Nathaniel Weymouth and Sophia (Dyar) Weymouth.  The part of Lisbon where Wesley was born later became Webster, Maine, and, even later, Sabattus, Maine.  The Weymouth family of Webster, Maine, is mentioned several times in the 1868 diary of Willie E. Jordan of Webster, Maine, the subject of a future post.

Justice of Peace David Harlow was presumably the David Harlow born about January 1791, according to a Maine Veterans Cemetery Record, which notes his death date as October 4, 1874.   According to his War of 1812 Pension Application, David and Lydia Murdock married on November 25, 1813 at Minot, Maine, less than a year before David enlisted in Captain Stephen Blake's Company in the Massachusetts Militia; it appears he served for only ten days.

David Harlow and wife Lydia, who died in 1883, are buried in the Town Cemetery at Strong, Maine, according to the a record from the Faylene Hutton Cemetery Collection.

If you have corrections to the information about Harrison Ormond Read; Mark Grover; Wesley Dyar Weymouth; and/or David Harlow, please leave a comment or contact me directly.

Posted by Pam Beveridge at 2:41 PM