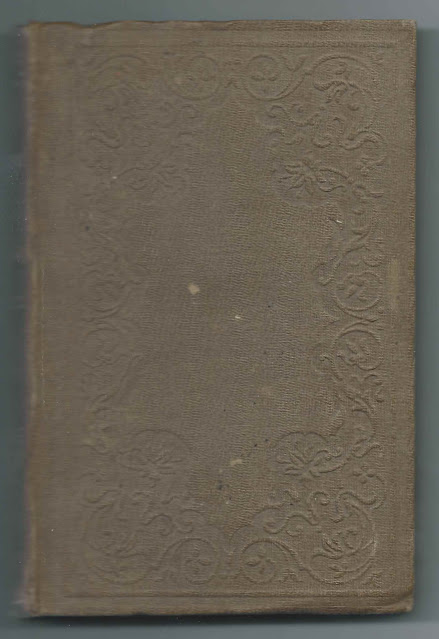 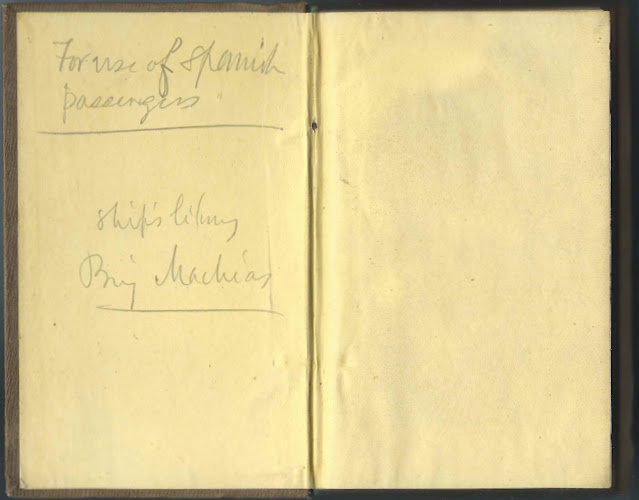 The book measures approximately 6" by 4-1/4" an contains 240 pages, plus several engravings throughout.  El Viador, Bajo del Simil de un Sueño was published in the early or mid 1800s by the Sociedad Americana de Tratados at New York, New York. 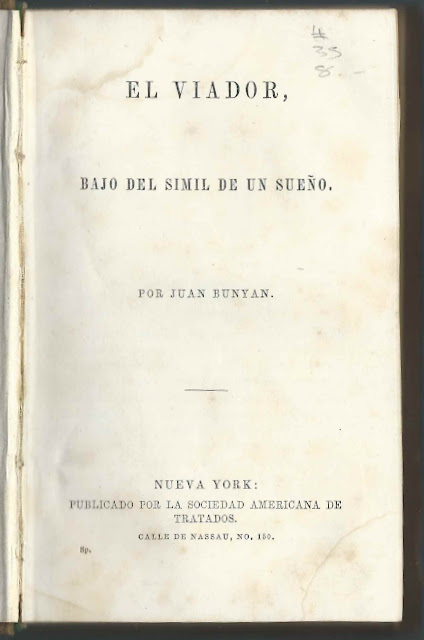 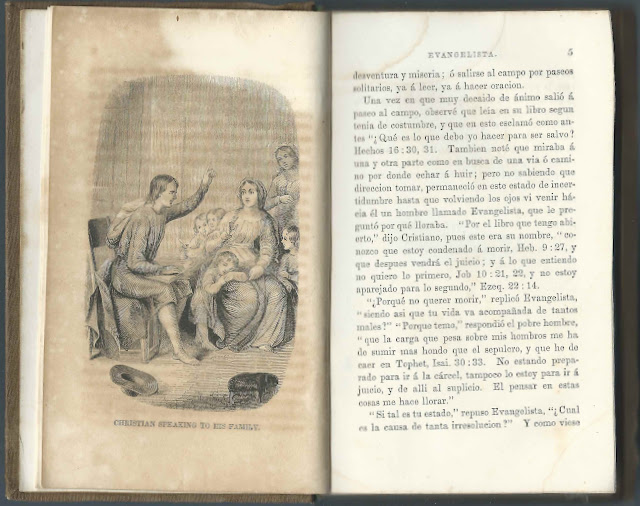 According to a reference online, The Brig Machias, was built at Machias, Maine, in 1858.  She was 242 ton burthen and was rated as an A2.  She plied the sugar trade route between the Caribbean and the Atlantic states.   She was owned by N. Longfellow of Machias, Maine, presumably shipbuilder Nathan Longfellow (1789-1870), at least in 1862 when she was captured by the Confederates on a voyage from Trinidad; more on that below.

Her captain was John Shoppy, presumably a descendant of Anton or Anthony Schoppe.   Schoppe, according to his Find-a-Grave listing, was a Hessian soldier in the American Revolution, who, after being taken prisoner at the Battle of Bennington, was given the chance to enlist in the Colonial Army.  He served until 1782 and later settled at Roque Bluffs near Machias, Maine, and raised 12 children.

Interestingly, while researching John H. Shoppy, I also found the name of James Shoppy, captain of the Ship Siddons and perhaps of the Roscius.  He may have been the James Shoppy who died in San Francisco of consumption on August 22, 1869.

See the transcription of an 1859 manifest that John H. Shoppy signed, indicating that the Brig Machias was carrying 5 citizens of Cuba, two of whom intended to make the United States their home.  Perhaps one or more of these passengers touched this little book.

In 1861, the brig Machias was one of the first to be captured by the C.S.S. Sumter, the former merchant steamship Marquis de la Habana, which the Confederate government purchased in April 1861 and converted into a bark-rigged screw steam cruiser.  Fortunately for the Machias and another brig, the Cuba, both captured on July 4, 1861, their loads were "neutral" sugar, so they weren't burned, as a previous Maine vessel, the Golden Rocket had been.  The Machias and the Cuba were taken to the Cuban port of Cienfuegos.  Read about efforts to release the ships in official records here.

I wonder if John H. Shoppy is the John Hamilton Schoppe who died at Washington, D.C. in 1864.  That John was born at Machias, Maine, on July 6, 1829, son of Daniel and Sarah (Thompson) Schoppe, and married Emily F. Holway, with whom he had at least three children, daughters Abbie Holway Schoppe; Elizabeth May Schoppe; and Kate Laura Schoppe.

If you have corrections and/or clarifications to the information above, please leave a comment or contact me directly.

Posted by Pam Beveridge at 1:49 PM