One letter written in 1864 and four written in 1869 by Delphina (Perham) Whitman of Bryant Pond in Woodstock, Maine, to her daughter Angelia (Whitman) Farrar, wife of Rufus Farrar, Jr., presumably then at Grafton Township, Maine.

Delphina's husband, Harrison Whitman, had died in 1845, and Delphina, who brought up her three surviving children alone, was leading a life of poverty and hard work.

The letters reveal that Delphina was a very intelligent woman.  She had served for a time in the 1860s as the librarian at Woodstock, Maine.  The main theme running through them is how greatly she missed her only daughter Angelia.  They don't live far apart at all by today's standards, but Delphina mentioned at least once that she lacked a team of her own, and noted in another letter that Angelia lacked a horse suitable for herself and a child.

Another interesting topic, especially covered in the letter of December 1869, was the very difficult school that Delphina's son Harry was teaching, or attempting to teach, at a place not named, a place where the school had apparently been a disaster for six years. Delphina related much of Harry's letter to Delphina and included such gems as:
Harry was Harrison Spofford Whitman, who had attended Norway Liberal Institute and Bowdoin College and would later receive his divinity degree from Tufts Divinity School and eventually become president of Westbrook Seminary in the Deering area of Portland, Maine.

His biography and photograph are included in the History of Woodstock, Me., with Family Sketches and an Appendix, published by William Berry Lapham in 1882. 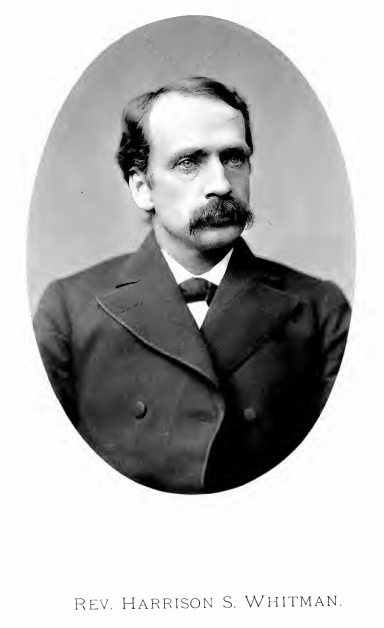 January 4, 1864 letter; an 8" x 10" sheet, fully used.  Delphina has a dream about holding Angelia in her lap and worries about son George serving in the Civil War.  Her poignant declaration: The time will never be when my children can suffer and I not, nor do I wish it to be.

Front and back panes shown above; panes 2 and 3 below:

People mentioned at least once:

October 27, 1869 letter; an 8" x 9-3/4" sheet, fully used.  Delphina notes that her son Harry is one of the editors of the "Bowdoin Bugle".  The most poignant lines of the letter: How I would like to go down to your house.  I never feel my poverty so much as when I want to go and see you.  I think I should go and see you every week were it not for the cost.  How I would like to give the children a good hugging.

People mentioned at least once:
November 3, 1869 letter; an 8" x 10" sheet, fully used.  Delphina is sorry to hear that Angelia's husband Rufus Farrar, Jr., is sick.  She also reports on the illness of her daughter in law Eliza J. (Davis) Whitman, wife of George Washington Whitman, who has been seen by a clairvoyant doctor from Portland.  The Mrs. Davis mentioned as staying with Eliza for two weeks was presumably Eliza's mother Harriet (Nute) Davis.  Harry is prospering at school.

People mentioned at least once:
November 24, 1869 letter; two panes of legal size paper, fully used; Delphina says Harry calls this "half acre paper".  A newsy letter with talk of Thanksgiving and how hard it would be for them to get together.  Mrs. Cotton said you had no horse that was suitable to carry a child with.

People mentioned at least once:
December 24, 1869 letter; 2 8"x 10" sheets, plus an 8" x 5" sheet.  This letter concerns the problems Delphina's son Harry is having at a school where discipline had been lacking for six years and Delphina's dream about her grandson Julian on a ladder that was attacked by oxen.

People mentioned at least once:

Harrison Whitman died in 1845.  By that time, he and Delphina had had four children, with their first,
Delphina died of the grippe at Grafton Township, Maine, on April 19, 1905, hopefully in the arms of her beloved daughter Angelia.

Posted by Pam Beveridge at 9:10 AM