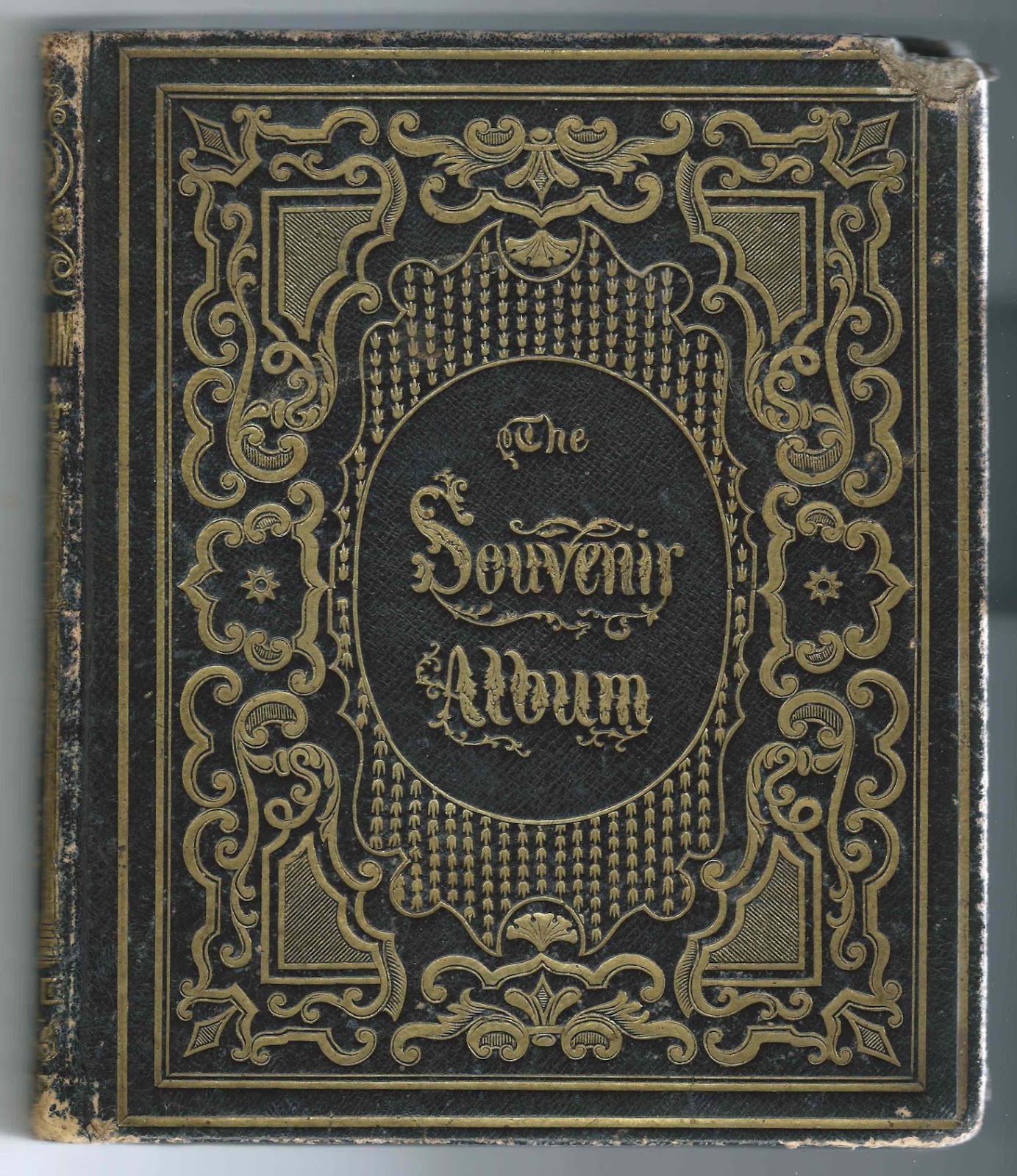 [Post amended February 8, 2015 with a reader's new information; revision in bold below.]

1857-1878 autograph album that belonged to Josephine M. Hamilton, with sentiments acquired from before and after her marriage to John Thompson Ware.  Only one of the pages was inscribed after the late 1850s/early 1860s era - from 1878, when apparently the album resurfaced.

It's likely that Josephine was a student at Yellow Springs College at Kossuth, Iowa, as at least two of the sentiments were left by students or faculty there.

The album was presented to Josephine by David H. Harper as a New Year's present.

The album measures approximately 8-1/2" x 7" and contains 23 sentiments, with one person possibly inscribing three of them.  An alphabetical surname list and an alphabetical list of the signers, together with any personal information they offered, appear at the end of this post.  I didn't notice that any of the inscribers mentioned a family relationship to Josephine, but it's possible that some of them were related to her.

Entitled "The Souvenir Album", the album was published by Leavitt and Allen of New York; it contains three engravings interspersed throughout.

In addition, several of the pages inscribed by Josephine's friends are works of art, such as the page inscribed by M. T. King at Wapello, Iowa, on July 9, 1857. 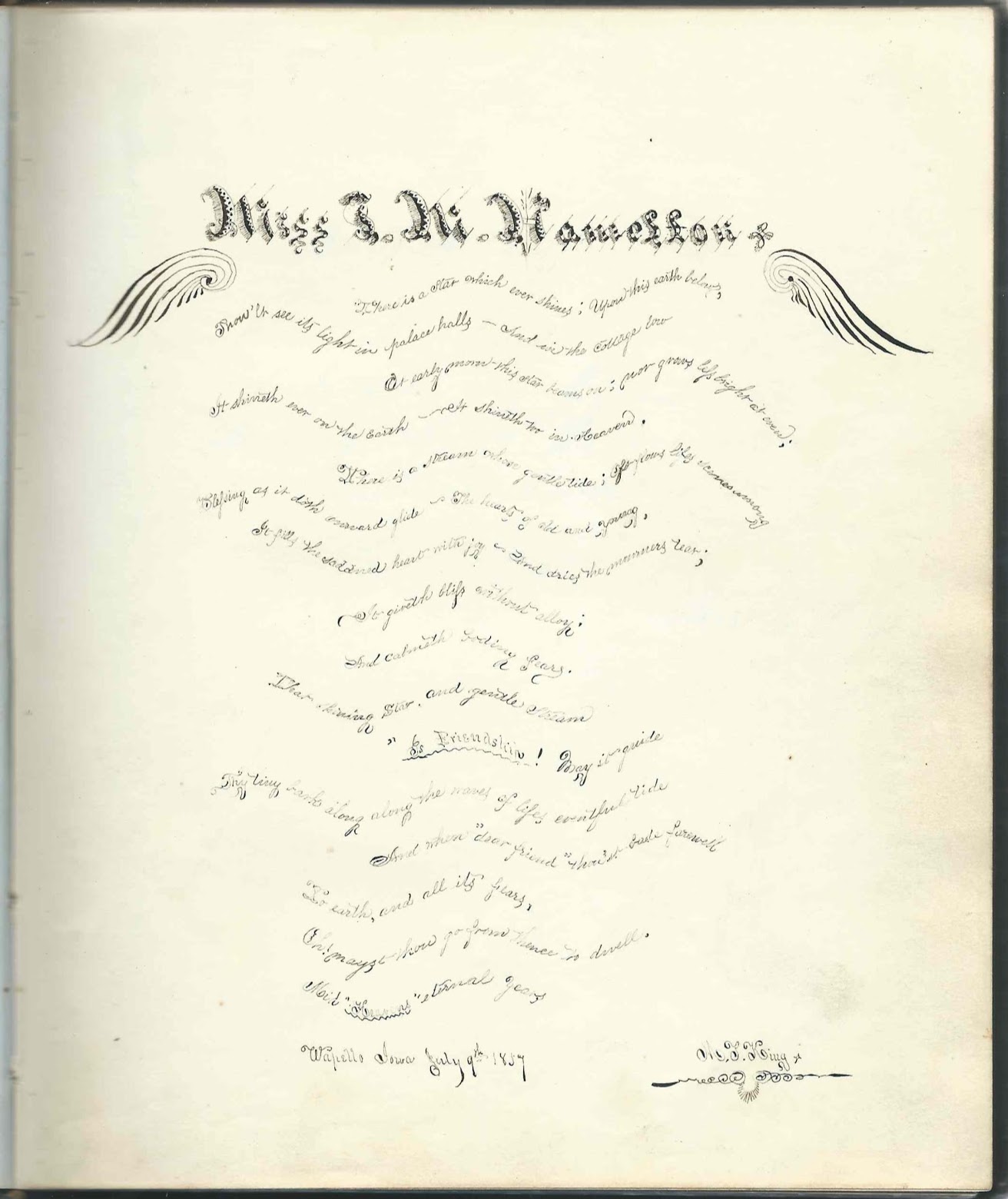 According to unverified sources, Josephine M. Hamilton was born October 22, 1840 at Ross, Ohio, the daughter of John and Sarah Hamilton, Ohio natives.   I haven't found more information on them as yet.

On August 23, 1860 at Des Moines, Iowa, Josephine married future Civil War veteran John Thompson Ware, son of John Detter Ware and Susannah Elizabeth (Heizer) Ware.  John and Josephine had as many as seven children or more.  I found one reference to Josephine's death in 1885, but I haven't found a record to verify that yet.  John Thompson Ware, I believe, died at Sawtelle, California, in 1904.

One page is signed by a person whose name looks like W. M. Van, but could possibly be Ware, the surname of Josephine's husband John Thompson Ware.

The last inscribed page in the album inscribed by Belle at Boone, Iowa, on April 10, 1878, when the album apparently came to light.  Note the initials in the upper left corner, possibly C.S.A., with a line through the C.  [An eagle-eyed reader has determined that the C is either a bass clef or cent symbol, and the S is actually an 8.  He suggests that, with the letter A, these might comprise an anagram.] 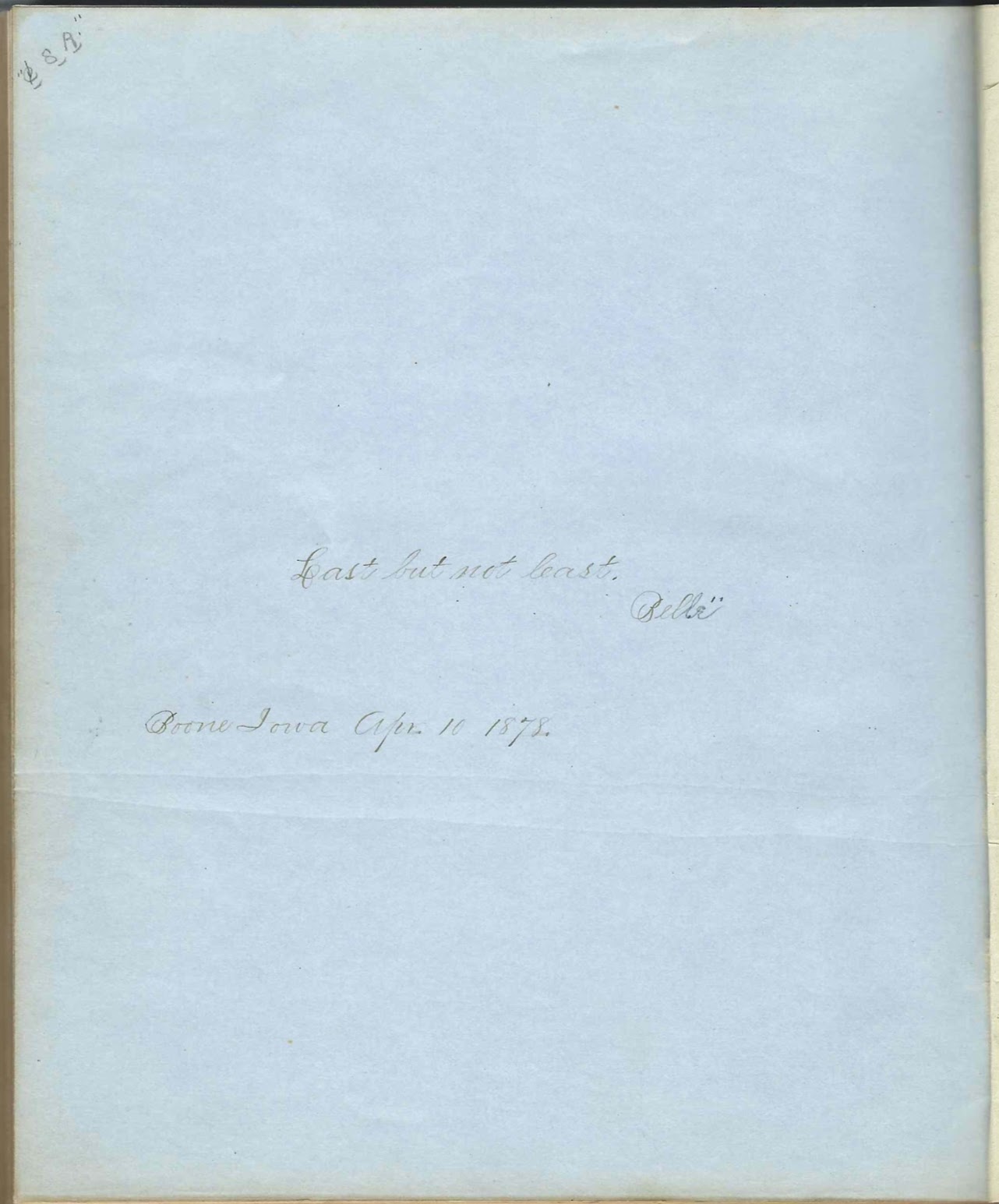 Signers in the Album        [Given names within a specific surname might not be in alphabetical order.]
B
C
F
G
H
K
L
P
S
V
W