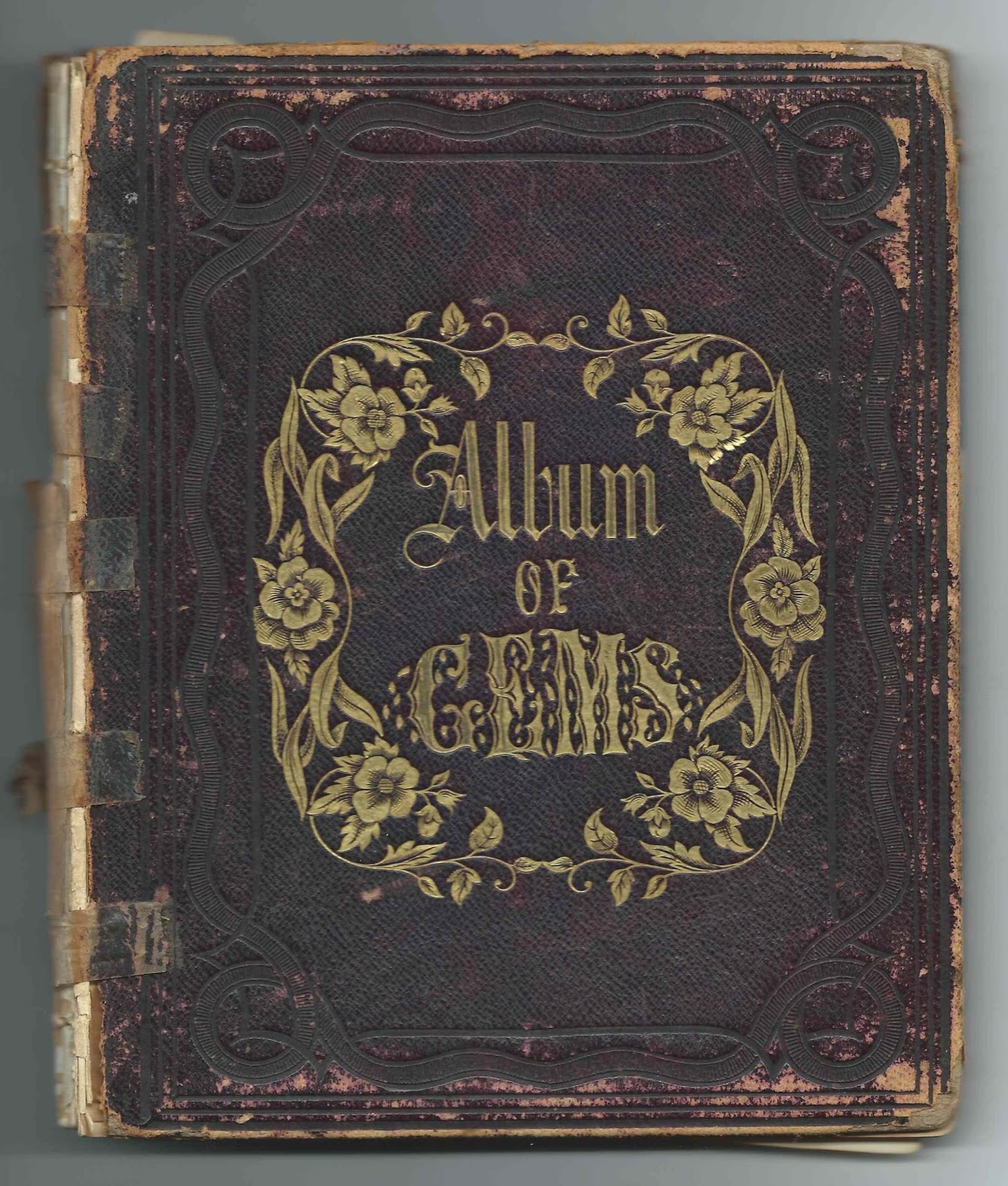 1857-1862 autograph album that belonged to Ellen Bickel of Jonestown, Pennsylvania, with some of the sentiments left by young women who attended the Linden Grove School, presumably Ellen's schoolmates there.

The album measures approximately 7-3/4" x 6" and contains the sentiments of nearly 40 of Ellen's relatives, friends and schoolmates.  An alphabetical surname list and an alphabetical list of the signers, together with any personal information they offered, appear at the end of this post.

The album was published by Ross and Brothers of Philadelphia, Pennsylvania, and contains five engravings interspersed throughout. 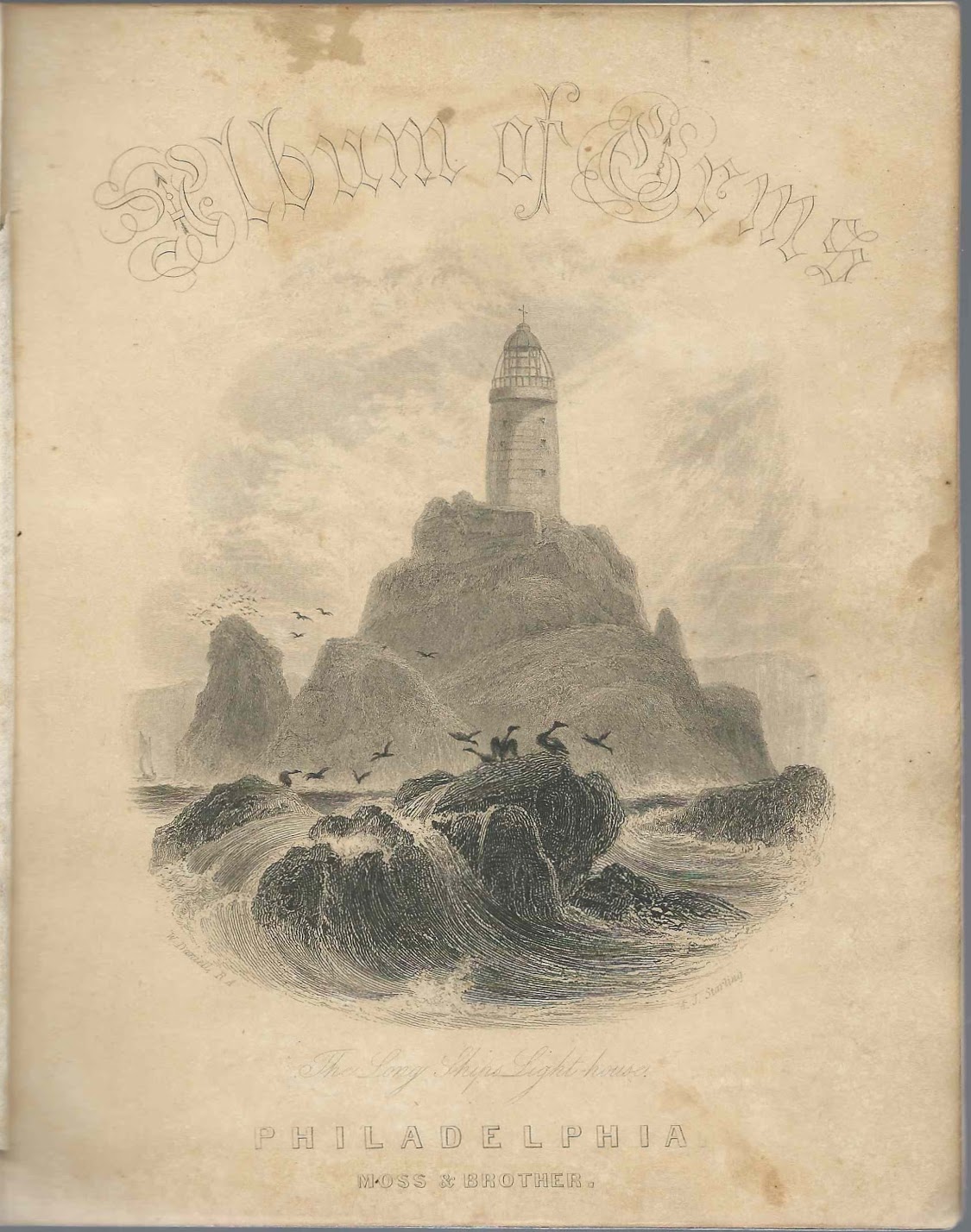 Additionally, an inscriber whose initials were W. R., decorated two pages, one with acorns and another with flowers.

As noted above, several inscribers mentioned Linden Grove and Rocheville Room.  One of these was Emma Grice - though I'm not sure of her surname and welcome readers' interpretations.   She mentioned Lancaster, so it's possible that Linden Grove School was located at Lancaster, Pennsylvania.  Two inscribers indicated they were Ellen's roommates: L. C. of Uniontown and Maggie Cummins "from Delaware". 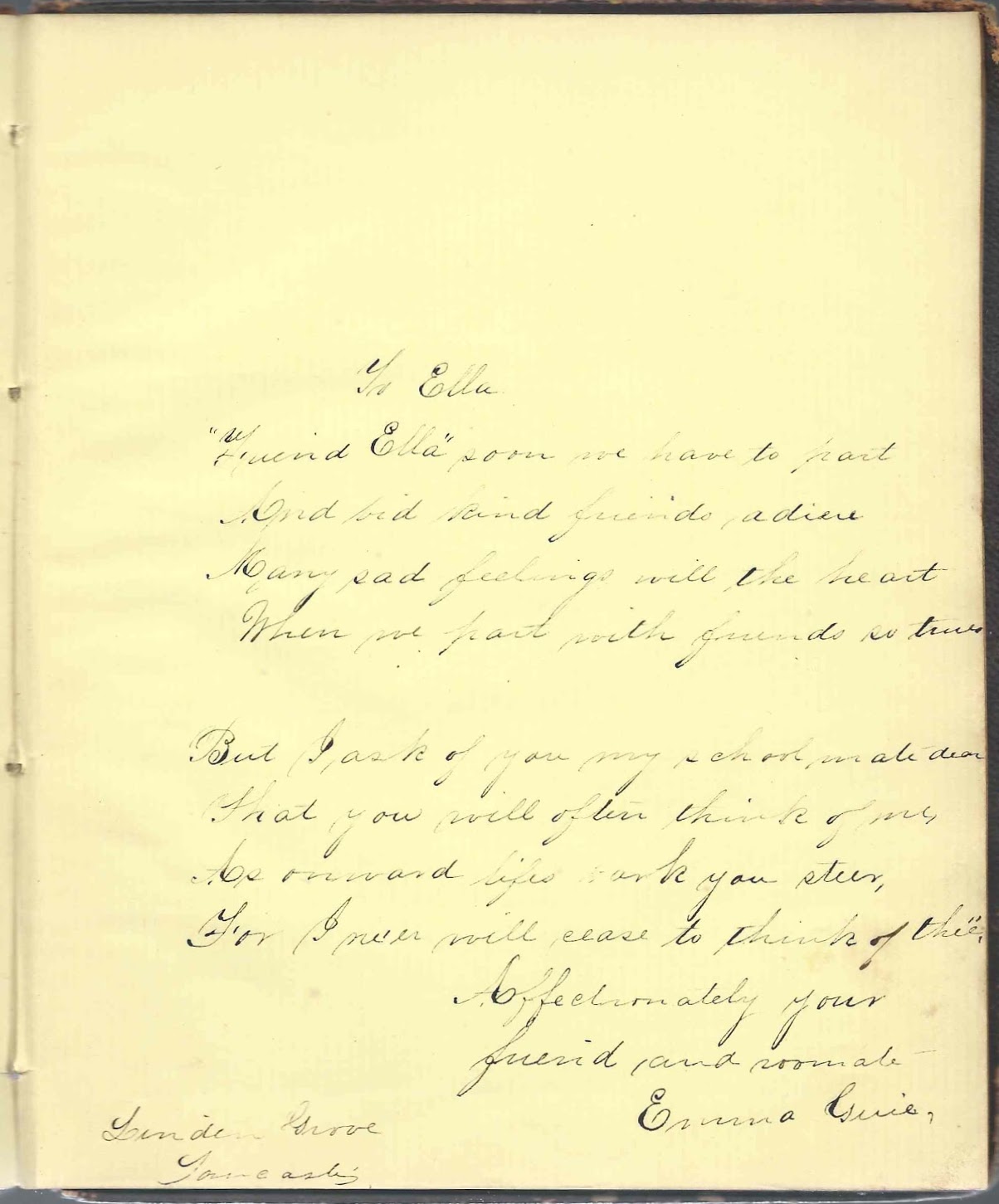 I haven't found a record yet, but sometime in the 1860s, Ellen married Warder Morris Weidman, son of Jacob Barge Weidman and his third wife Elizabeth Chambers (Murray) Weidman.   Warder Morris Weidman may have inscribed the last page of the album, as that page appears to have the initials W. M. W. 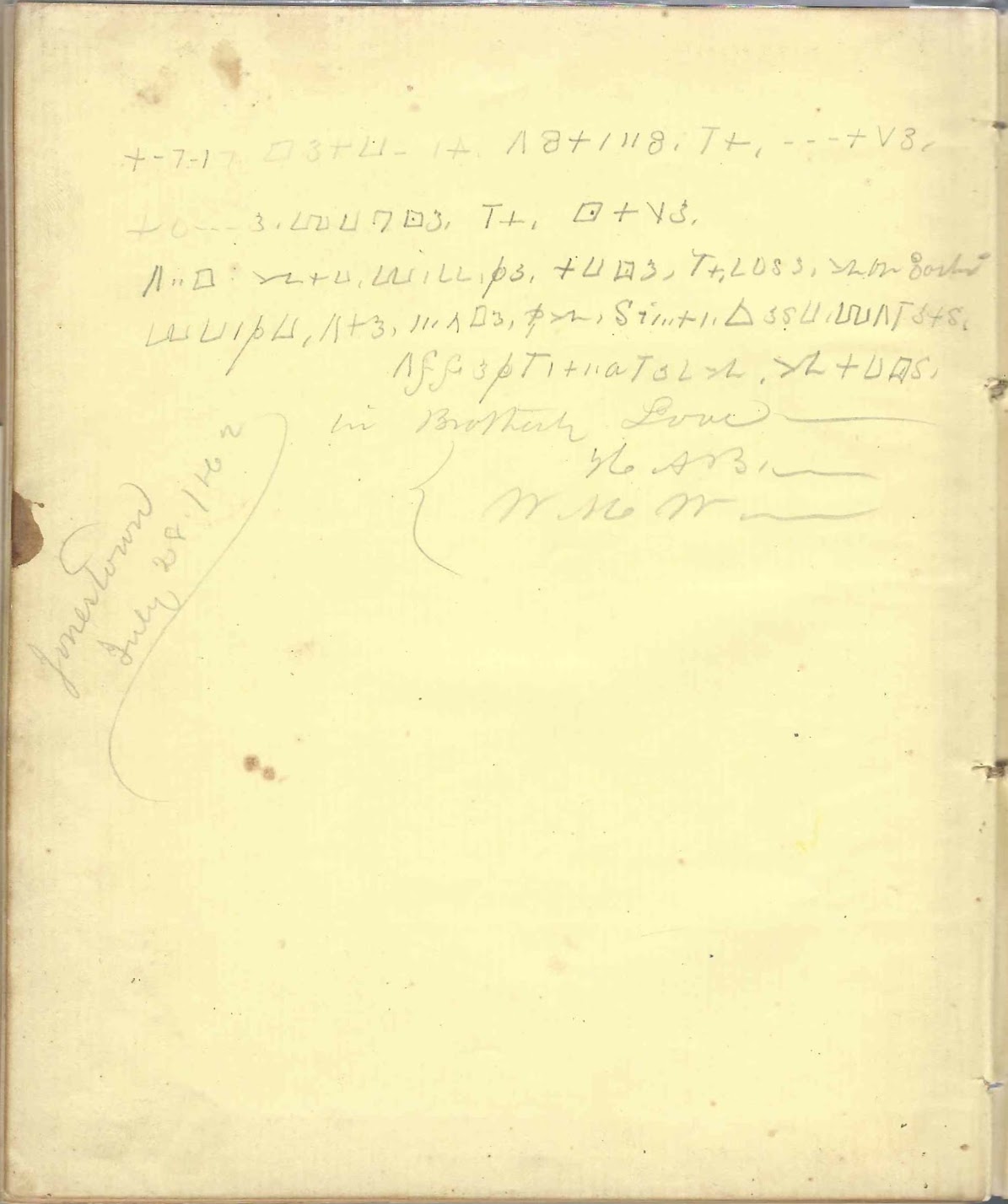 Warder Morris Weidman died in 1895, and Ellen (Bickel) Weidman in 1928.  They're buried at Mount Lebanon Cemetery at Lebanon, Pennsylvania.  If you have corrections and/or additions to the information above, please leave a comment or contact me directly. 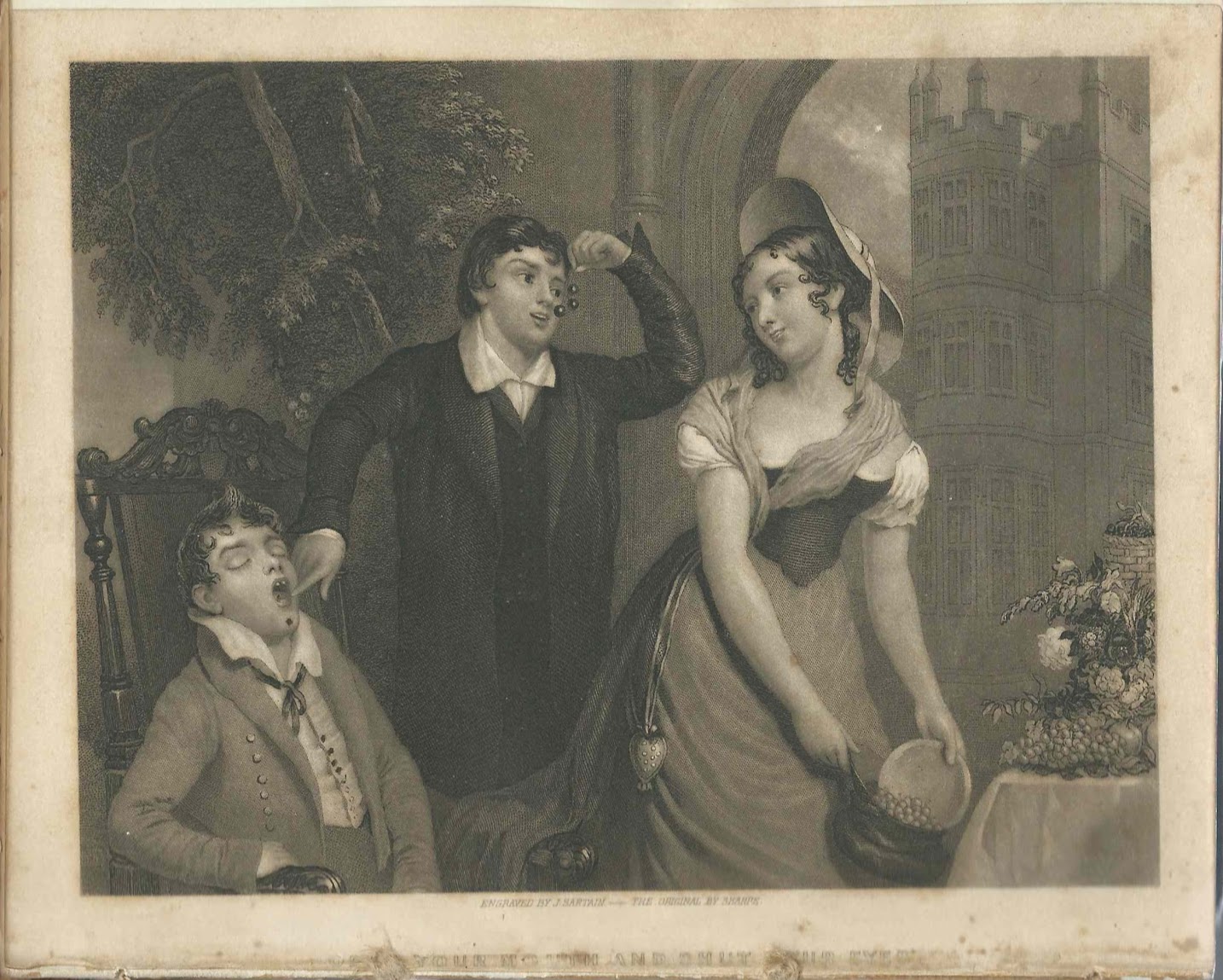 A reader has forwarded an image of the 1863 discharge document of Ellen's brother Henry Rank Bickel: 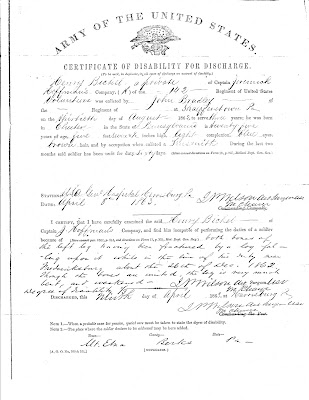 Inscribers in the Album   [Given names within a specific surname might not be in alphabetical order.]
B
C
E
F
G
H
L
P
R
S
W