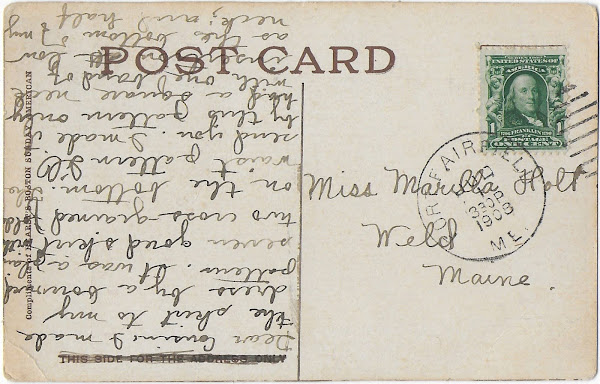 1908 postcard sent by Ethel in Fort Fairfield, Maine, to her cousin Miss Marilla Holt in Weld, Maine.
A transcription appears at the end of this post. 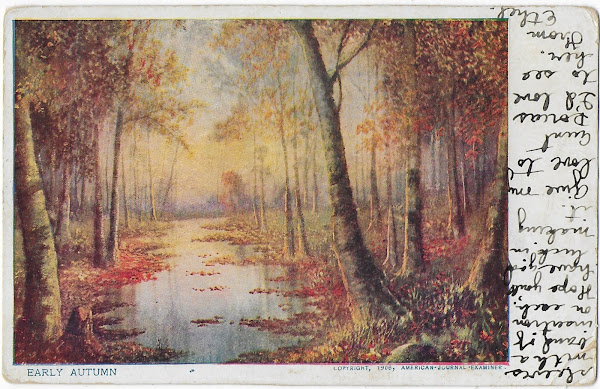 Addie Marilla Holt (1895-1979) was the daughter of Allen S. Holt and Dorcas F. (Childs) Holt.  Addie would marry Roland Fletcher (1900-1952) and raise a family in Wilton, Maine.
With thanks to researcher Greg Childs, who loves a challenge:
Ethel was presumably Marilla's cousin Ethel Maude Rollins (1890-1980), daughter of Benjamin Sanford Rollins and Loretta (Childs) Rollins, the latter of whom died in 1895.  Loretta's untimely death no doubt explains why Ethel would appear in the 1900 Census of Fort Fairfield, Maine, as an "adopted daughter" in the household of George E. Childs (1857-1905) and his wife Mary Adelaide (Gammon) Childs, both natives of Franklin County, Maine.
Marilla's mother, Dorcas F. (Childs) Holt, and Ethel's mother, Loretta (Childs) Rollins, were sisters; they had also lost their mother at a young age, perhaps as a result of Dorcas' birth. George E. Childs (1857-1905) was their younger half brother.
It appears that Ethel married three times:
Ethel was born in Litchfield, Maine, and lived in various towns in Maine, in New Hampshire and, finally, in California, where she died.  She's buried in Fort Fairfield, Maine.
Transcription
Dear Cousin. I made the skirt to my dress by a borrowed pattern. It was a plain seven gored skirt with two cross grained folds on the bottom. The waist pattern I'll send you. I made it by this pattern only had a square neck with one band of insertion as low as the bottom of my neck; and half sleeves with a band of insertion on each. Hope you'll have good luck in making it. Give my love to Aunt Dorcas. I'd love to see her. From Ethel.
If you have information to share on the Childs, Holt and/or Rollins families, please leave a comment for the benefit of other family researchers.
Posted by Pam Beveridge at 3:57 PM