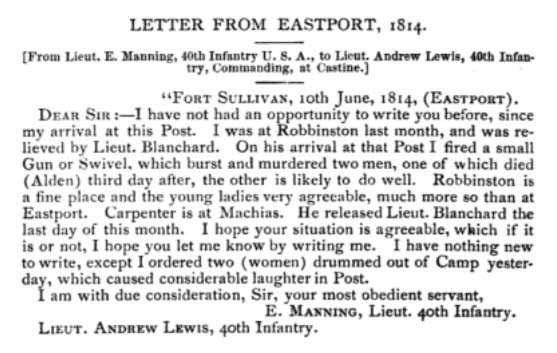 June 10, 1814 letter from Lieutenant E. Manning of the 40th Infantry, stationed at Fort Sullivan in Eastport, Maine, to Lieutenant Andrew Lewis, 40th Infantry Commanding, at Castine, Maine.
Interestingly, both Fort Sullivan and Castine would fall into British hands, as the result of a surprise invasion not long after.  In the case of Fort Sullivan, which was captured on July 11, 1814, the British would not leave until June 30, 1818, as Eastport had been disputed territory since the American Revolution, and the British were anxious to retain it.
Interesting content:
This letter appeared on page 200 in the The Bangor Historical Magazine, Volume 3, July 1887-June 1888.  The contents page lists many interesting articles, including several others with an Eastport, Maine, connection.
Transcript
LETTER FROM EASTPORT, 1814
[From Lieut. E. Manning, 40th Infantry U.S.A., to Lieutenant Andrew Lewis, 40th Infantry, Commanding, at Castine.]
"FORT SULLIVAN, 10th June, 1814 (EASTPORT).
DEAR SIR: - I have not had an opportunity to write you before, since my arrival at this Post. I was at Robbiston last month, and was relieved by Lieut. Blanchard. On his arrival at that Post, I fired a small Gun or Swivel, which burst and murdered two men, one of which died (Alden) third day after, the other is likely to do well. Robbinston is a fine place andthe young ladies very agreeable, much more so than at Eastport. Carpenter is at Machias. He released Lieut. Blanchard the last day of this month. I hope your situation is agreeable, which if it is or not, I hope you let me know by writing me. I have nothing new to write, except I ordered two (women) drummed out of Camp yesterday, which caused considerable laughter in Post.
I am with due consideration, Sir, your most obedient servant.
E. Manning, Lieut. 40th Infantry
Lieut. Andrew Lewis, 40th Infantry. 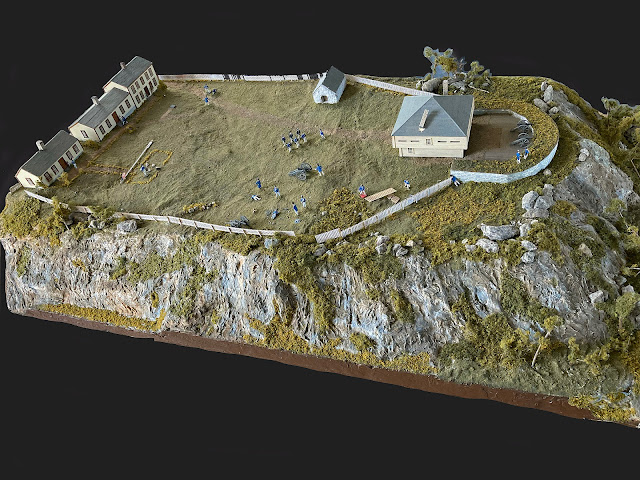 Diorama of Fort Sullivan (1808-1873)
Fort Sullivan was captured by the British on June 11, 1814 and was renamed Fort Sherbrooke, in honor of Canadian military and political leader Sir John Coape Sherbrooke (1764-1830). When the British finally quit their occupation, on June 30, 1818, the fort returned to its original name of Fort Sullivan.
As for the origin of Sullivan, what is known is that it was likely named for one of two Sullivan brothers, with the younger brother the more likely.
Posted by Pam Beveridge at 5:12 PM