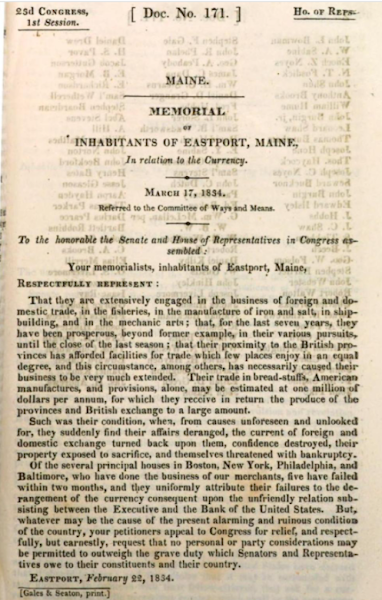 1834 U.S. Government publication containing a request signed by 97 inhabitants, presumably merchants and professionals, of Eastport, Maine.
Appears in a publication from the 23rd Congress, First Session, 1833-4.
Memorial of Inhabitants of Eastport, Maine, In Relation to the Currency
March 17, 1834
Referred to the Committee of Ways and Means
To the honorable the Senate and House of Representatives in Congress assembled:
Your memorialists, inhabitants of Eastport, Maine.
The names, shown below, are not recorded in alphabetical order, but a list in alphabetical order follows the image. 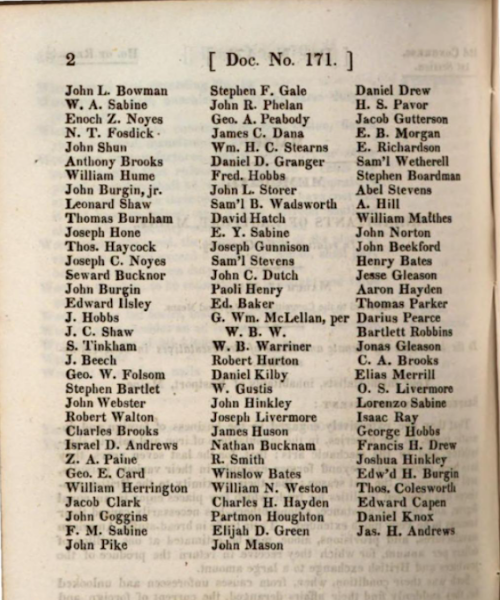 Names in Alphabetical Order - Note: There's at least one error in surnames, if not more - check the entire list if you are searching for someone you think should be here
Transcript:
Respectfully Represent:
That they are extensively engaged in the business of foreign and domestic trade, in the fisheries, in the manufacture of iron and salt, in shipbuilding, and in the mechanic arts; that, for the last seven years, they have been prosperous, beyond former example, in their various pursuits, until the close of the last season; that their proximity to the British provinces has afforded facilities for trade which few places enjoy in an equal degree, and this circumstance, among others, has necessarily caused their business to be very much extended. Their trade in bread-stuffs, American manufactures, and provisions, alone, may be estimated at one million of dollars per annum, for which they receive in return the produce of the provinces and British exchange to a large amount.
Such was their condition, when, from causes unforeseen and unlooked for, they suddenly find their affairs deranged, the current of foreign and domestic exchange turned back upon them, confidence destroyed, their properly exposed to sacrifice, and themselves threatened with bankruptcy.
Of the several principal houses in Boston, New York, Philadelphia, and Baltimore, who have done the business of our merchants, five have failed within two months, and they uniformly attribute their failures to the derangement of the currency consequent upon the unfriendly relation subsisting between the Executive and the Bank of the United States. But, whatever may be the cause of the present alarming and ruinous conditions of the country, your petitioners appeal to Congress for relief, and respectfully, but earnestly, request that no personal or party considerations may be permitted to outweigh the grave duty which Senators and Representatives owe to their constituents and their country.
EASTPORT, February 22, 1834
Posted by Pam Beveridge at 7:38 AM