1834, Lubec, Maine - Memorial of Inhabitants of Lubec re: Rechartering the Bank of the U.S. - Currency; 32 Names 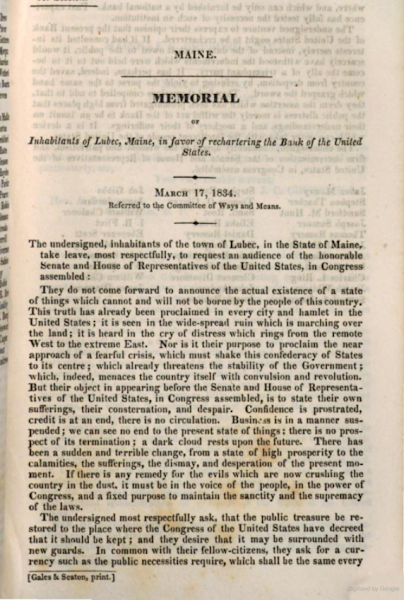 1834 U.S. Government publication containing a request signed by 32 inhabitants, presumably merchants and professionals, of Lubec, Maine.
Appears in a publication from the 23rd Congress, First Session, 1833-4.
Memorial of Inhabitants of Lubec, Maine, in favor of rechartering the Bank of the United States
March 17, 1834
Referred to the Committee of Ways and Means
The names, shown below, are not recorded in alphabetical order, but a list in alphabetical order follows the image.  If you have information to share on any of the men named, please leave a comment. 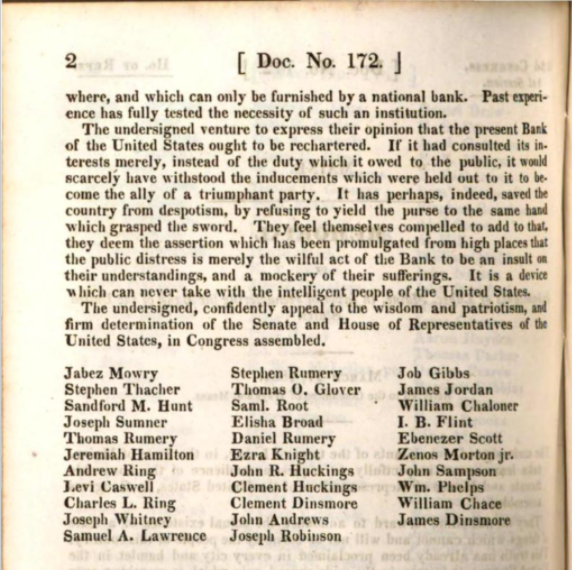 Names in Alphabetical Order - Note: There appears to be at least one error in a name - check the entire list if you are searching for someone you think should be here.
Transcription
Memorial of Inhabitants of Lubec, Maine, in favor of rechartering the Bank of the United States
March 17, 1834
Referred to the Committee of Ways and Means
The undersigned inhabitants of the town of Lubec, in the State of Maine, take leave, most respectfully, to request an audience of the honorable Senate and House of Representatives of the United States, in Congress assembled.
They do not come forward to announce the actual existence of a state of things which cannot and will not be borne by the people of this country. This truth has already been proclaimed in every city and hamlet in the United States; it is seen in the wide-spread ruin which is marching over the land; it is heard in the cry of distress which rings from the remote West to the extreme East. Nor is it their purpose to proclaim the near approach of a fearful crisis, which must shake this confederacy of States to its centre; which already threatens the stability of the Government; which, indeed, menaces the country itself with convulsion and revolution. But their object in appearing before the Senate and House of Representatives of the United States, in Congress assembled, is to state their own sufferings, their consternation, and despair. Confidence is prostrated, credit is at an end, there is no circulation. Business is in a manner suspended; we can see no end to the present state of things; there is no prospect of its termination; a dark cloud rests upon the future. There has been a sudden and terrible change, from a state of high prosperity to the calamities, the sufferings, the dismay, and desperation of the present moment. If there is any remedy for the evils which are now crushing the country in the dust, it must be in the voice of the people, in the power of Congress, and a fixed purpose to maintain the sanctity and the supremacy of the laws.
The undersigned must respectfully ask, that the public treasure be restored to the place where the Congress of the United States have decreed that it should be kept; and they desire that it may be surrounded with new guards. In common with their fellow-citizens, they ask for a currency such as the public necessities require, which shall be the same everywhere, and which can only be furnished by a national bank. Past experience has fully tested the necessity of such an institution.
The undersigned venture to express their opinion that the present Bank of the United States ought to be rechartered. If it had consulted its interests merely, instead of the duty which it owed to the public, it would scarcely have withstood the inducements which were held out to it to become the ally of a triumphant party. It has perhaps, indeed, saved the country from despotism, by refusing to yield the purse to the same hand which grasped the sword. They feel themselves compelled to add to that, they deem the assertion which has been promulgated from high places that the public distress is merely the wilful act of the Bank to be an insult on their understandings, and a mockery of their sufferings. It is a device which can never take with the intelligent people of the United States.
The undersigned, confidently appeal to the wisdom and patriotism, and firm determination of the Senate and House of Representatives of the United States, in Congress assembled.
Posted by Pam Beveridge at 1:42 PM