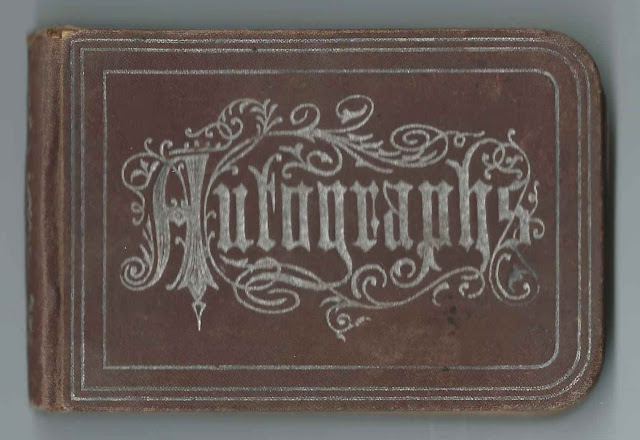 Autograph album kept by Inez Putnam, "Ina", of Russellsburg, Pennsylvania, in Warren County.  Inscribers spelled it as Russellburg or Russelsburg or Russell, as it's known today.

Inez acquired the album on March 24, 1880, as shown on the first end paper below.

Inez also inscribed the last end paper, where she wrote her name twice, once as Ina and once as Inez.

The album measures approximately 4" by 2-3/4" and contains the sentiments of over 50 of Inez's relatives, friends, schoolmates and teacher.  An alphabetical list of the inscribers, together with any personal information they offered, appears at the end of this post.

According to her FindaGrave memorial, which doesn't provide a source, Inez Elmay Putnam was born December 23, 1871.  Her parents were Theodore Lafayette Putnam and Abigail (Akeley) Putnam.  Inez' father inscribed the right facing page, shown below, although his first initial looks more like an F than a T.

Other relatives who mentioned a kinship with Inez [and there were likely more who didn't]: