1870s-1913 Autograph Album of Jennie P. Bamford of Fayette, Maine, with some Inscriptions to her Mother Nancy Quimby (Bean) Bamford 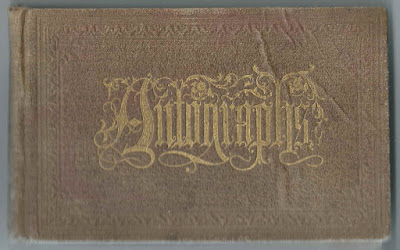 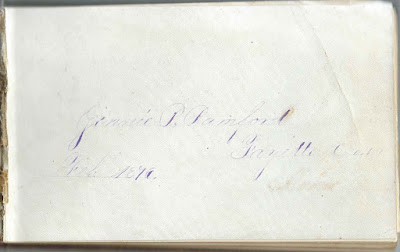 Three or more of the later autographs in the album, from the early 1900s, were inscribed to "Grammy", who was Jennie's mother Nancy Quimby (Bean) Bamford.  Could Jennie have died or move away by this time and the album passed along to her mother? 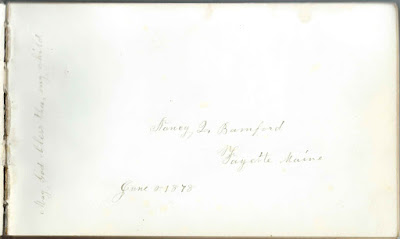 The album measures approximately 7" by 4-1/4" and contains the sentiments of 47 of Jennie's relatives, friends and schoolmates.  An alphabetical surname list and an alphabetical list of the inscribers, together with any personal information they offered, appear at the end of this post.

Jennie P. Bamford was born about 1860, presumably at Fayette, Maine, the daughter of Charles H. Bamford and Nancy Quimby (Bean) Bamford.  Jennie was a student at the Maine Wesleyan and Seminary and Female College at Kents Hill at Readfield, Maine, at least in 1876.  She was out of her parents' household by the time of the 1880 Census.  Whether she was off teaching or was married or had died, I don't know.

Relatives who inscribed pages in the album had surnames of:  [and there were likely more]

I found a web page that has information on a family Bible that belonged, initially at least, to Jennie's grandparents John and Mary (Quimby) Bean.

If you have corrections, clarifications or additions to the information above, please leave a comment or contact me directly.