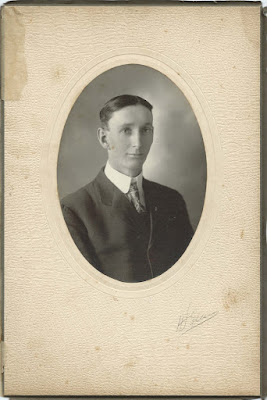 c1900 photograph, possibly a graduation photograph, of a young man identified on the reverse as Clarence McLearn.  His photograph was found with a group of photographs, most of which have a connection to Middleborough, Massachusetts, but this may be a coincidence.

Interestingly, a farm hand named Clarence McLearn appears in a 1904 Directory of Middleborough, Massachusetts; he was boarding with A. H. Soule.  There were other people by the name of McLearn in the area, most of them having roots in Nova Scotia or Prince Edward Island.

I found a Clarence Edward McLearn, born June 18, 1883 at South Rawdon, Nova Scotia, the son of Rupert Judson McLearn and Georgenia (Dimock).  Clarence and his family are shown on the 1891 Census of South Rawdon.  Clarence was out of his parents' household by the time of the 1901 Census.

The 1921 Census found the family still at Fairview, with school teacher, Elsie McDanish, an Ontario native, boarding with them.  Sadly son Maurice died in 1926.  Edna died in 1951 and Clarence in 1961.  Helen Georgenia (McLearn) Ridalls, lived until 2002.  All four are buried at the D'Arcy Cemetery at D'Arcy, Saskatchewan, along with Helen's husband Charles William Ridalls.

If you recognize Clarence McLearn from family photographs, either as Clarence Edward McLearn, or another Clarence entirely, please leave a comment or contact me directly.

Assuming the Clarence in the photograph is Clarence Edward McLearn, the map below charts at least some of his travels.

Posted by Pam Beveridge at 5:26 PM