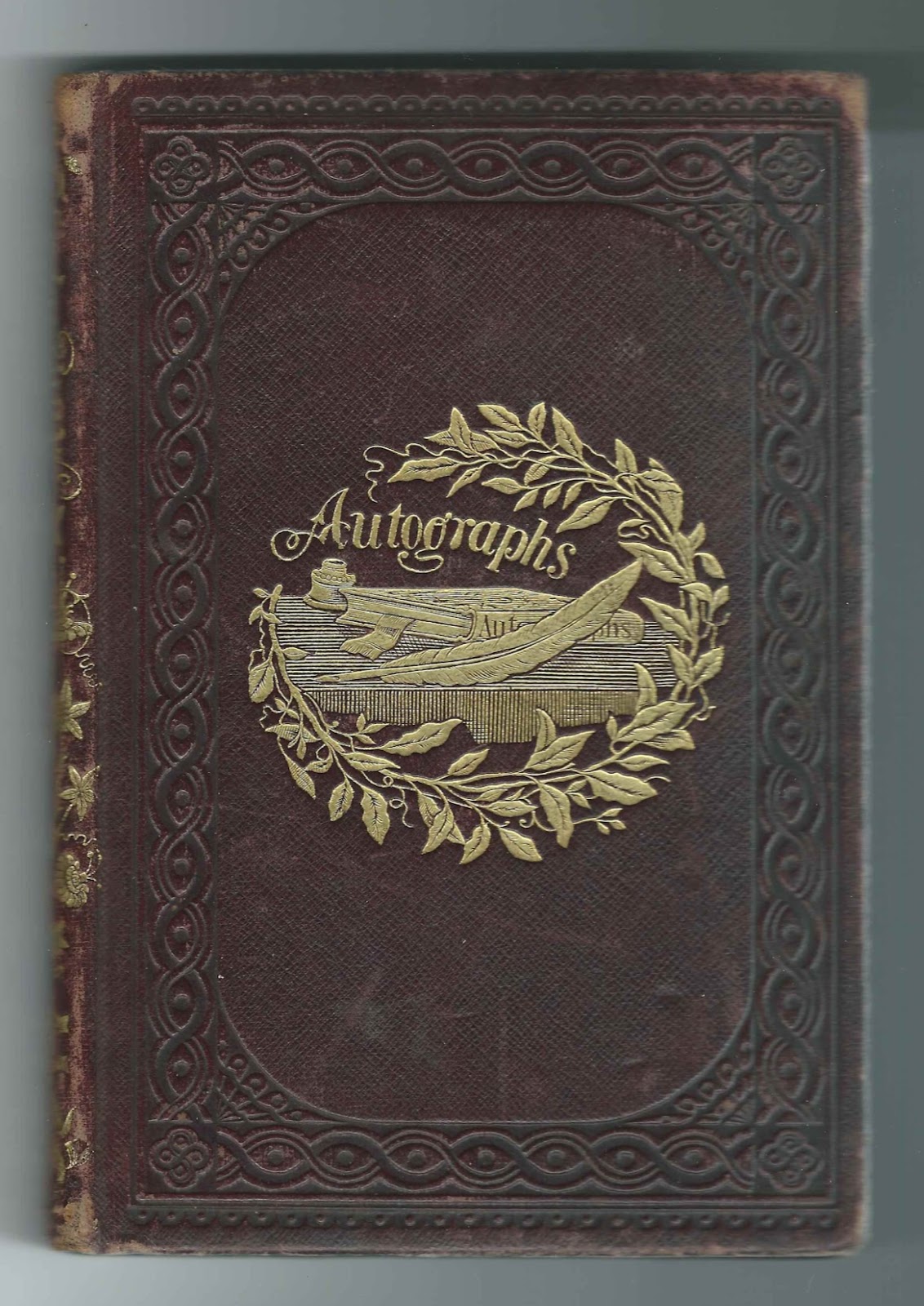 1860+ autograph album of John M. Wernham, who was born in New York, lived in New Jersey and later moved to McHenry County, Illinois, with his parents and siblings.  The wellwishers hail from all three states. 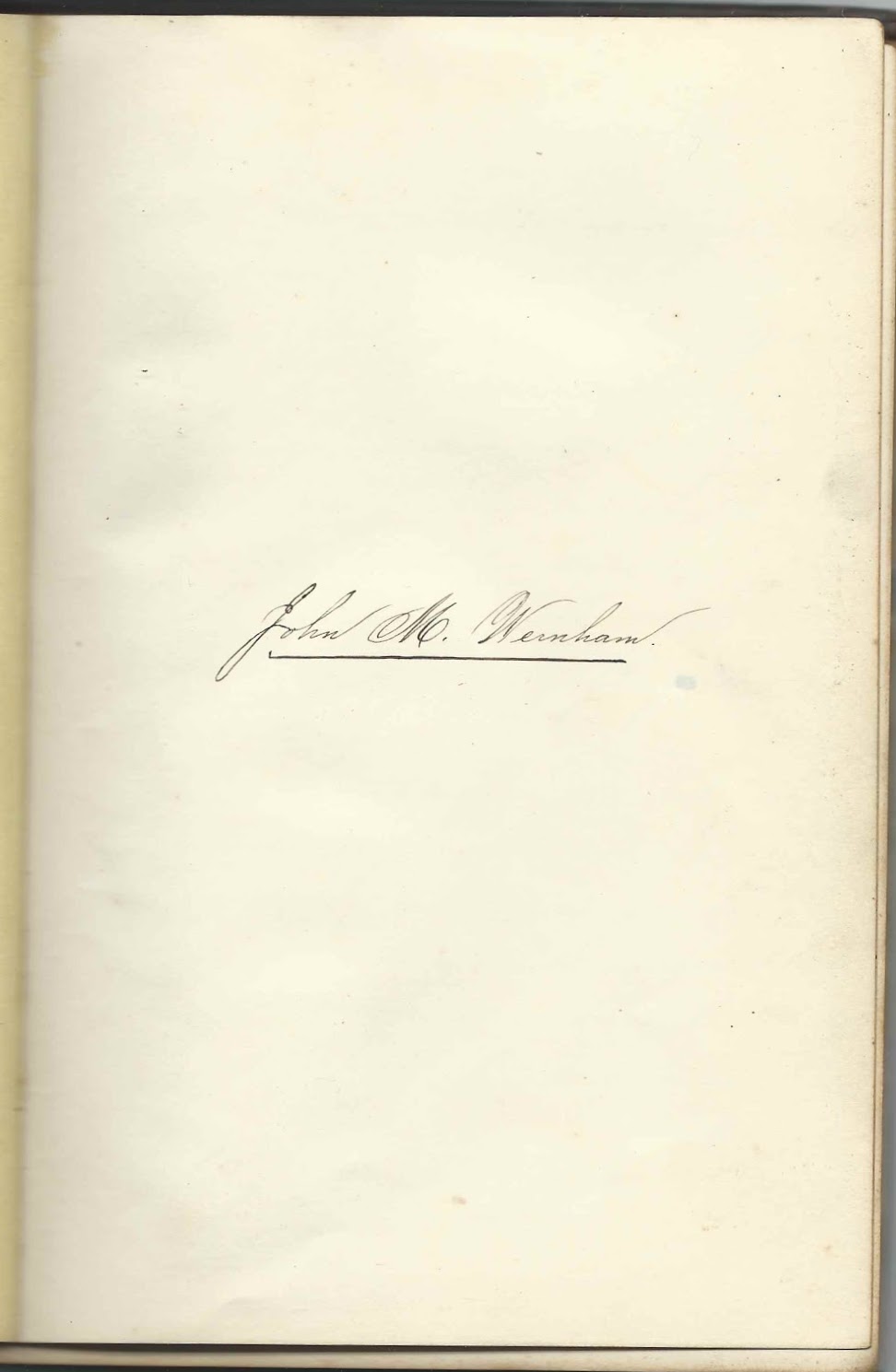 The album is approximately 8" x 5-1/2" and contains the sentiments of 35 of John's relatives and friends.  An alphabetical surname list and alphabetical list of the signers, together with any personal information they offered, appear at the end of this post.

John M. Wernham was born August 30, 1842 in New York City, I believe, the son of James Wernham and Margaret (Mackenzie) Wernham, who was born in New York or New Jersey.  In some sources, James is shown as an English immigrant; in others, he was shown as born in New York.  The confusion may have resulted from the fact that, according to one source, his father had the same name.

Three of John's siblings inscribed pages in the album.  Mary, or Marie, signed a page as Marie.  She would later marry William Abbott, a Massachusetts native, and they would make their home at Marengo, Illinois.  She may have met him in Illinois. 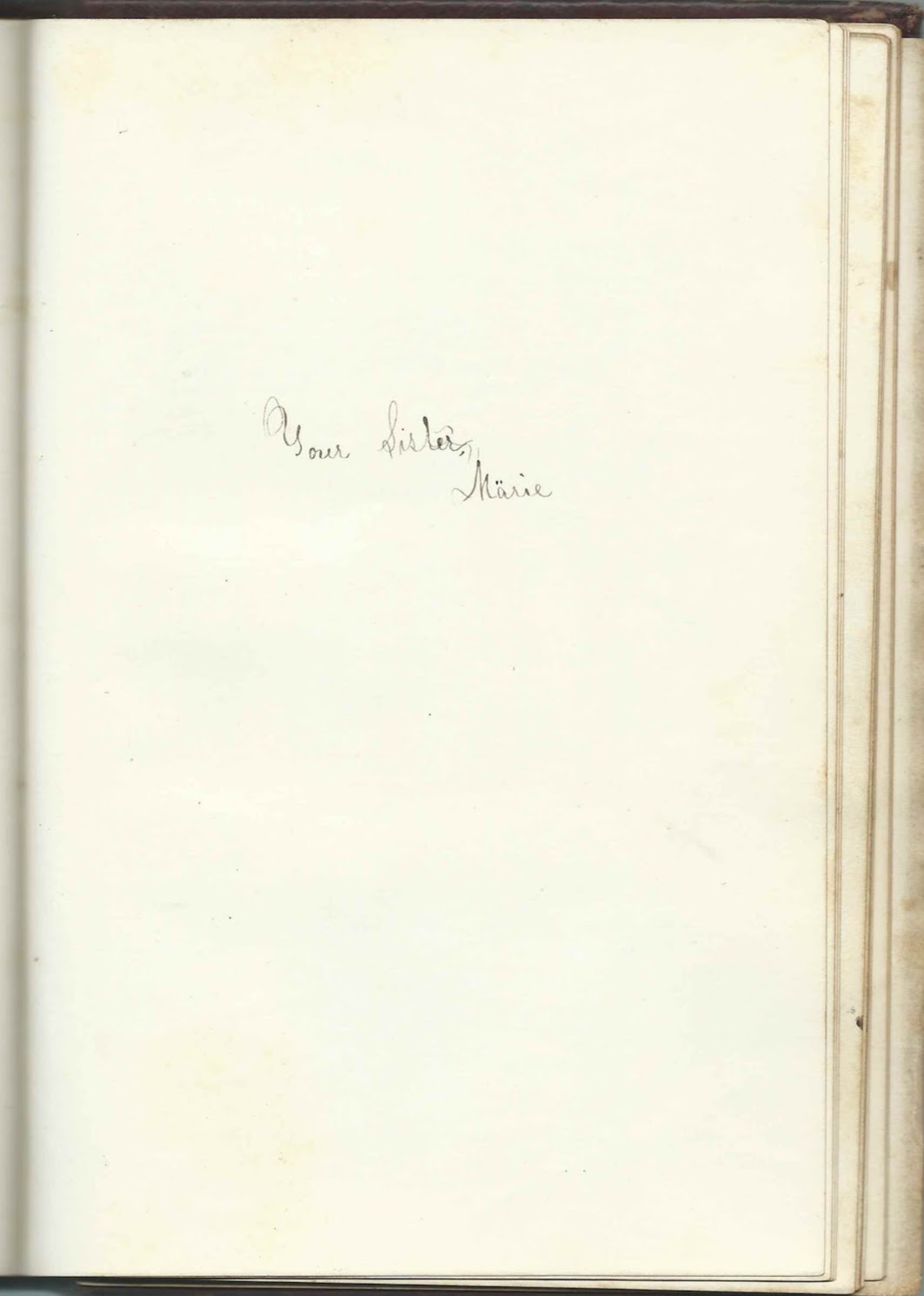 Sister Martha Elizabeth Wernham, "Mattie", signed a page while she was a student at the State Normal School at Trenton, New Jersey.  Two other people, presumably fellow students, also signed the page: Ine Rosbotham and Annie C. Williams.  Mattie would later marry Charles William Ingersoll, who also signed a page in the album. 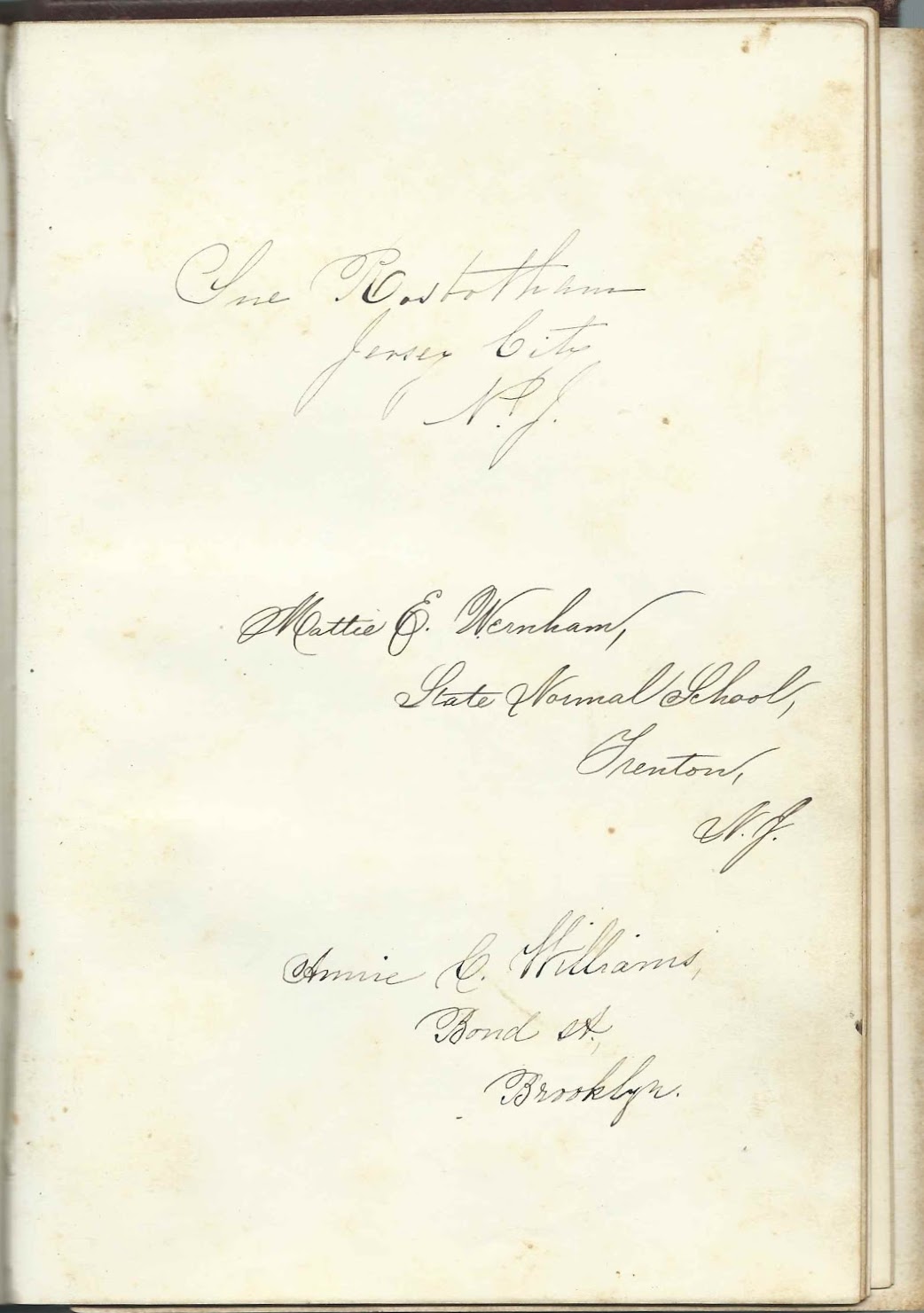 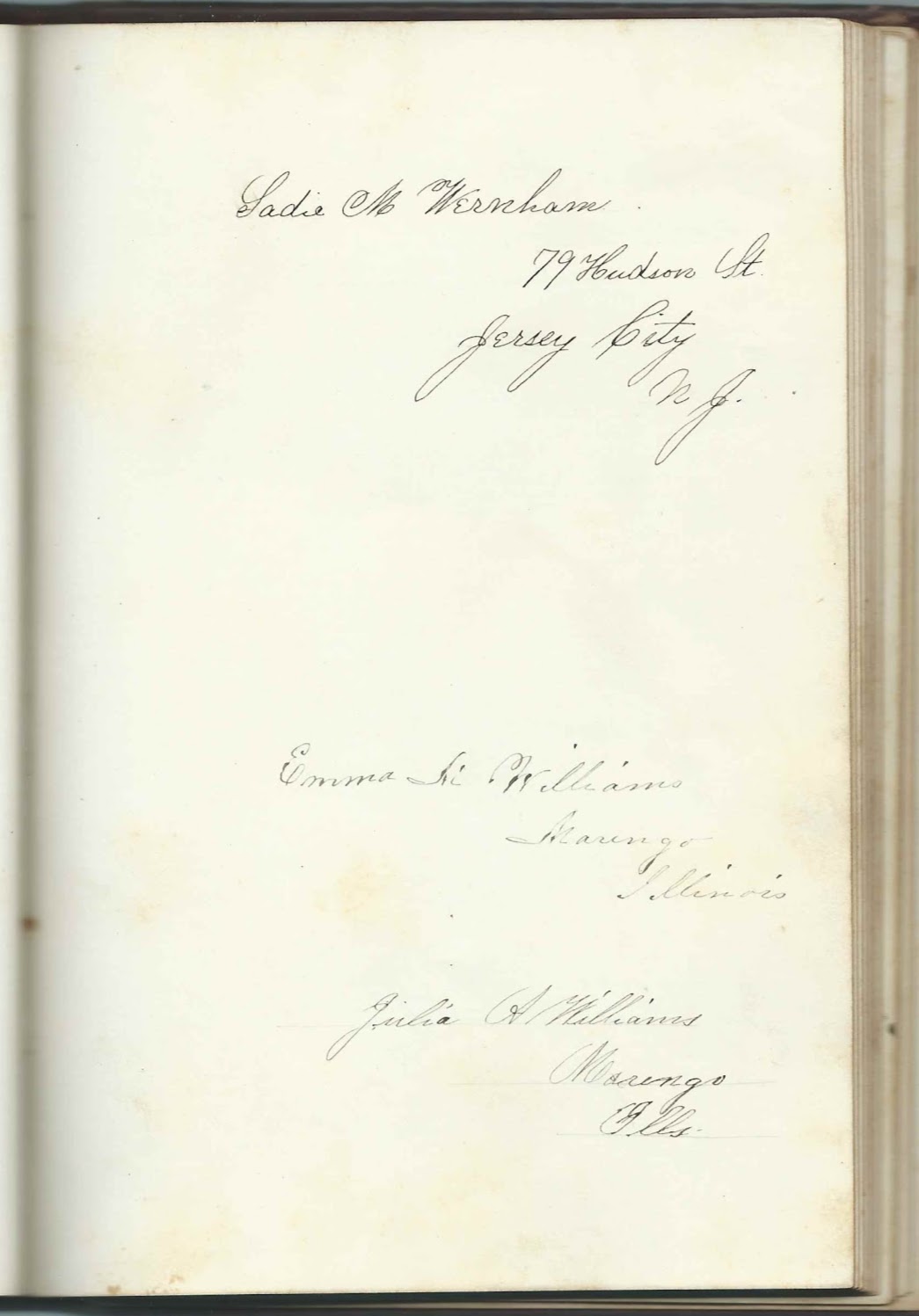 At some point after 1860 the Wernham family moved to McHenry County, Illinois, in the area of Riley and Marengo.  Another sibling, Spencer Cone Wernham was a noted physician in Illinois, as was his son James I. Wernham, possibly named for his paternal grandfather.

Four signers named Mackenzie inscribed pages in the album: John, Sr; John; Robert; and William.  It's tempting to think that John Mackenzie Sr. might have been Margaret's father and John, Robert and William her brothers, but I haven't as yet found evidence of that.

On May 3, 1864, John M. Wernham enlisted in Company F of the 141st Illinois Regiment.  He died just a few months later at Columbus, Kentucky, on September 21, 1864, whether from disease or battle wounds, I don't know.  I also don't know if he's actually buried with his parents and sister Sadie, as their shared stone at the City Cemetery at Marengo, Illinois, implies.