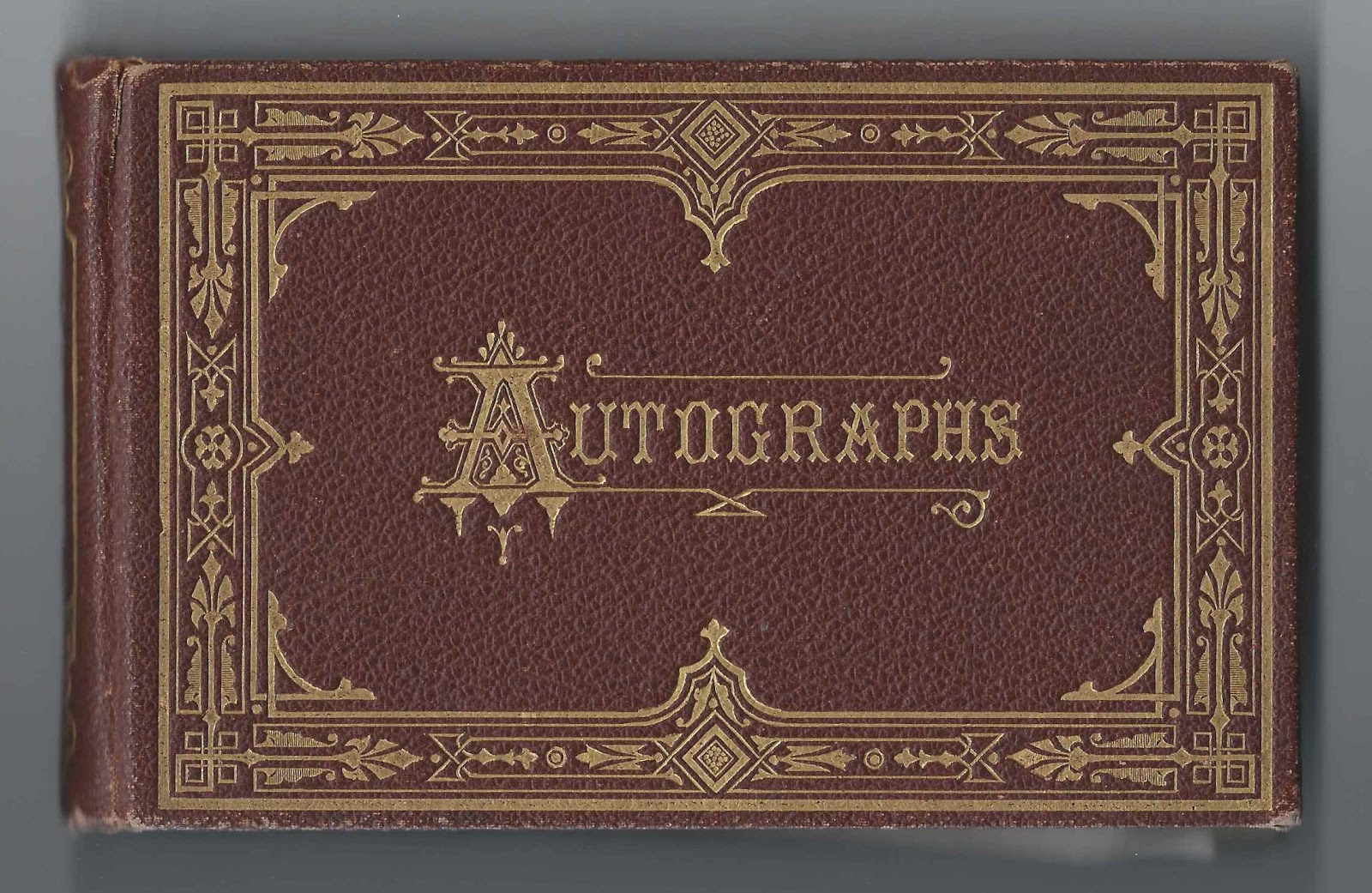 1873-1880 autograph album of Mary Ella Coburn of Chelsea, Massachusetts, presumably a graduate of Chelsea High School in the Class of 1873. 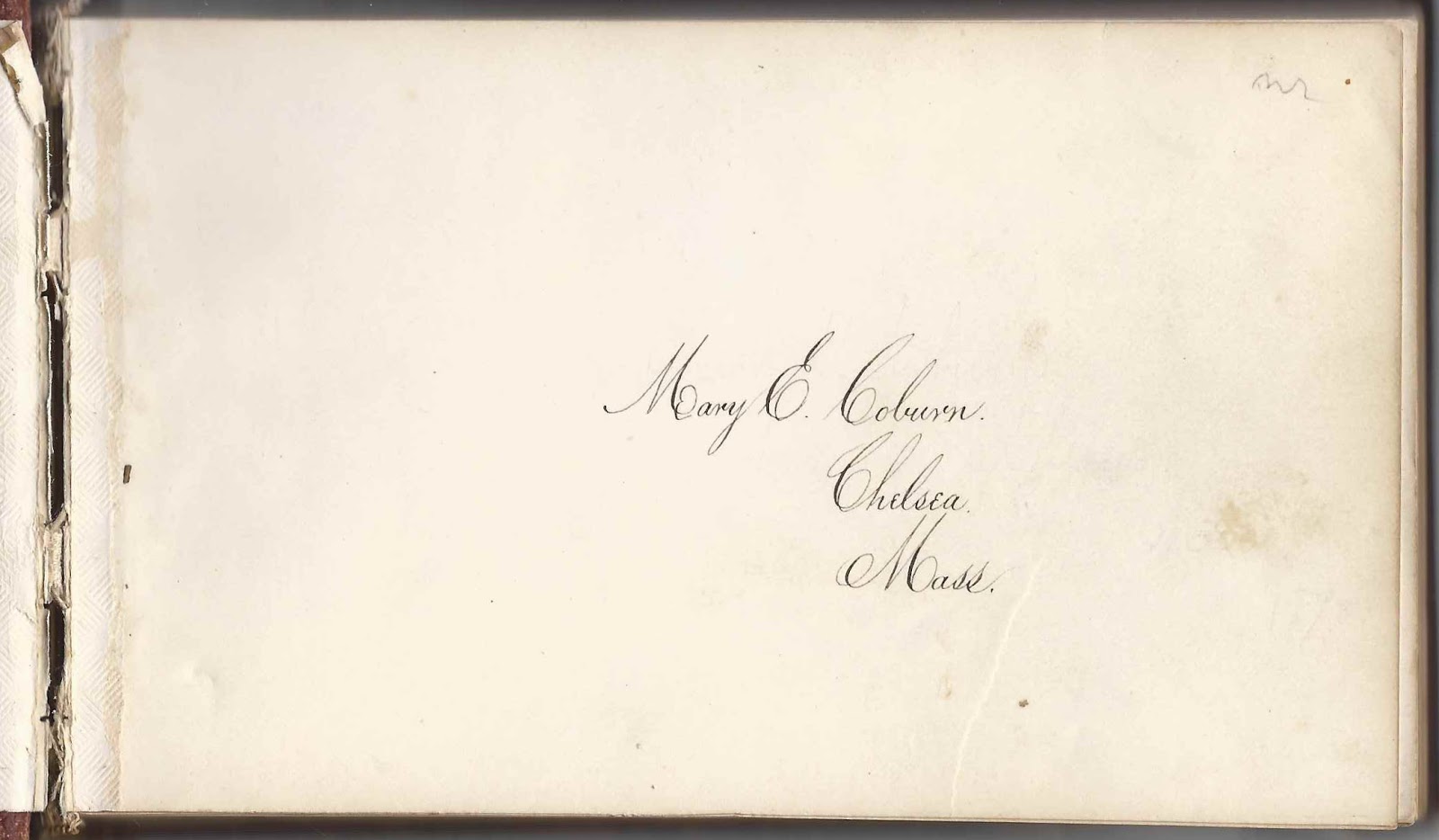 The album measures approximately 7" x 4-1/4" and contains the sentiments of over 40 of Mary Ella's relatives, schoolmates and friends.  An alphabetical list of the signers, with any residence and school information, appears at the end of this post. 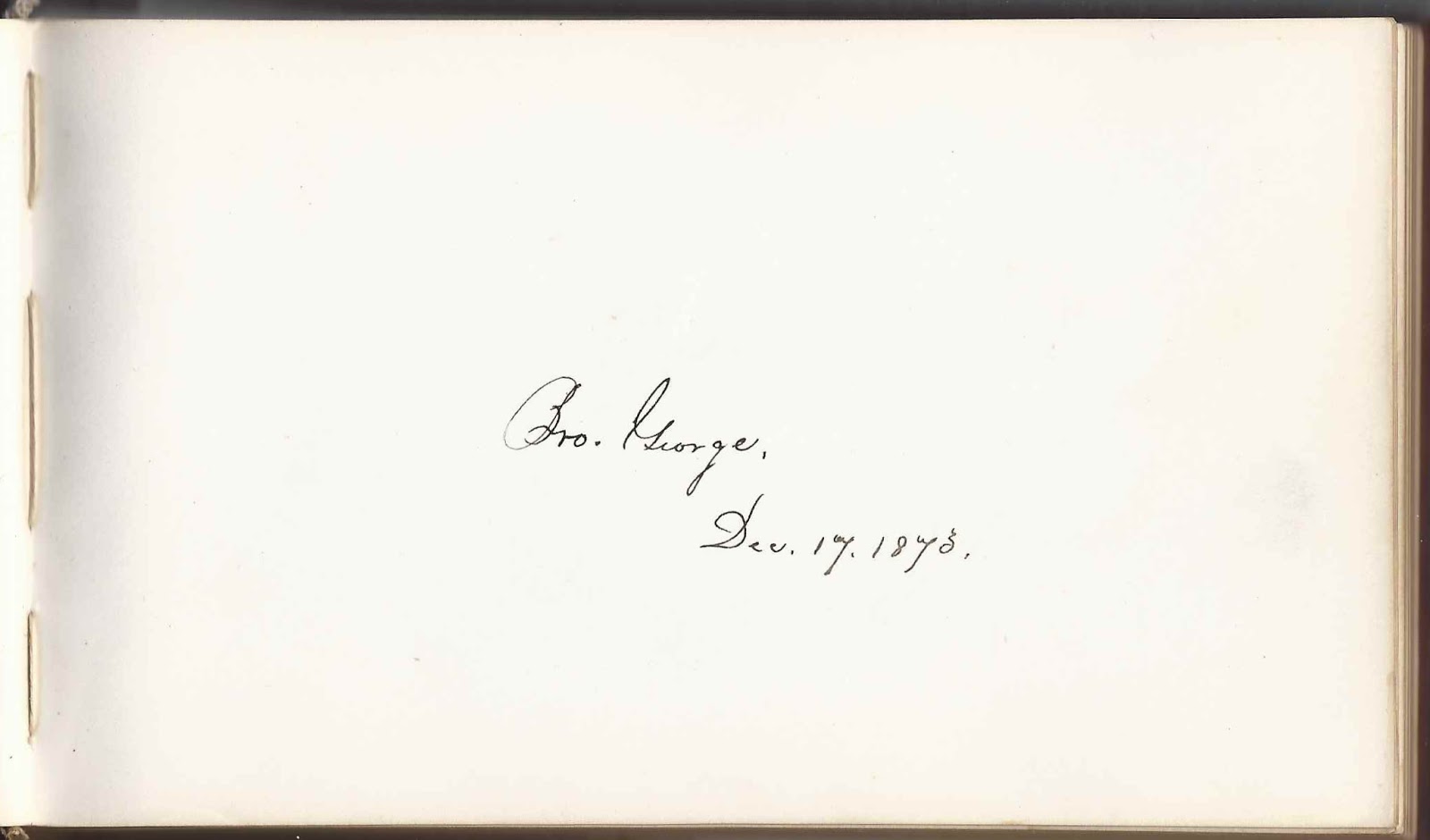 Her brother Frank Forrester Coburn's name appears in tiny handwriting at the margin of a page near the end of the album.  It's possible that someone else wrote his name. 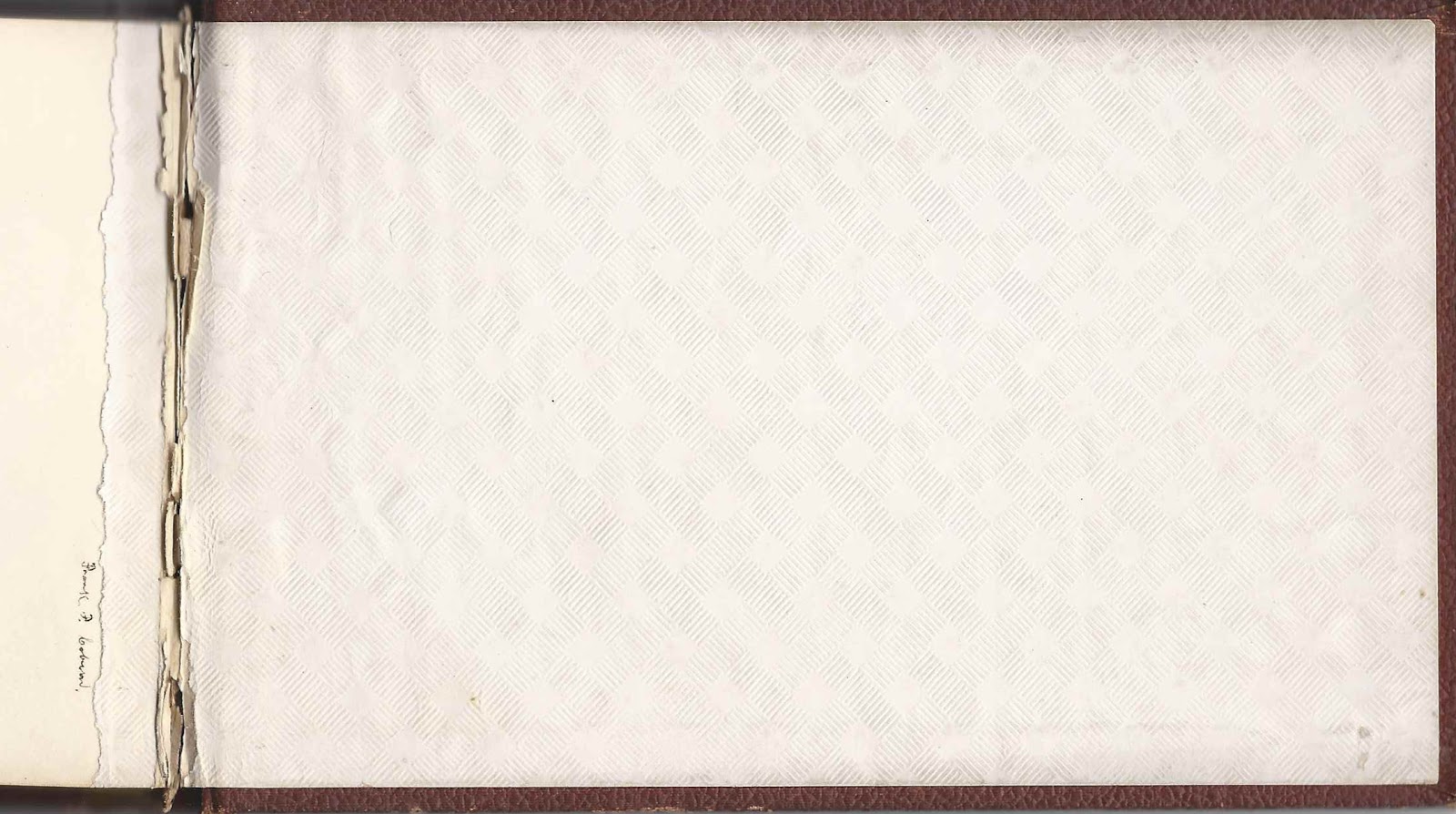 Mary Ella's older sister Emma Jane (Coburn) Brolaski had died before Mary Ella started her album.  Emma Jane had married John B. Brolaski on 6 February 1866.  Their daughter Cora M. Brolaski, who was born in Missouri about 1867 inscribed a page in her aunt Mary Ella's album on September 19, 1878.  Either she was visiting family in Massachusetts, or Mary Ella was visiting St. Louis, Missouri. 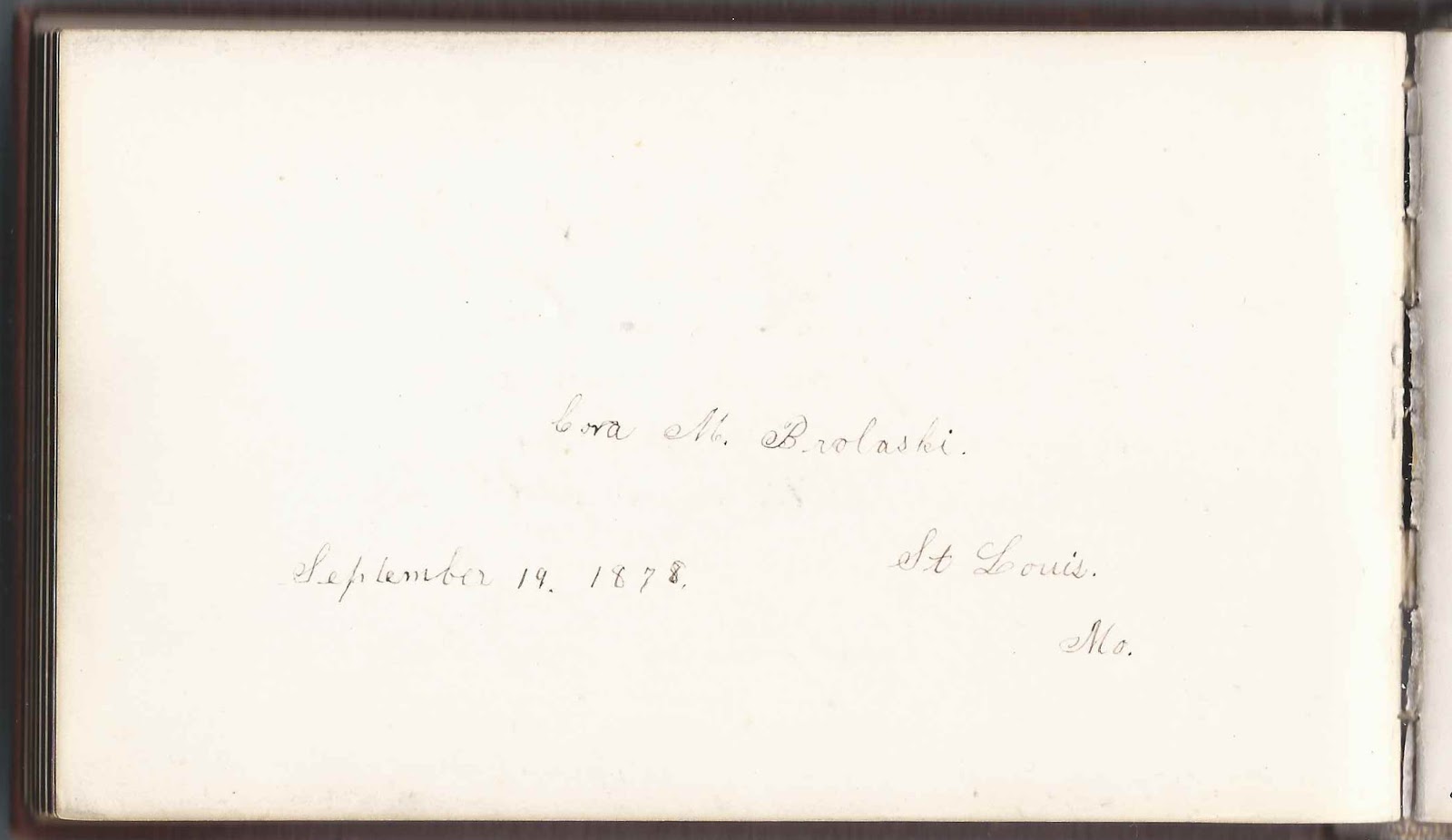 From the many signers who noted that they were members of the Class of 1873 at Chelsea High School, I'm assuming that Mary Ella Coburn was also in that class.  Whether Mary Ella went on to pursue higher education or not, I don't know, but the 1880 Census of Chelsea, Massachusetts, shows her living with her parents Henry and Eliza and not employed.

Not that she necessarily needed to work, as her father, while in Louisville, Kentucky about 1840, had discovered a way to extract oil from lard and then returned to Massachusetts to build a factory at Chelsea that proved very profitable.

Mary Ella was working as a music teacher when she married John H. Haskell on 27 April 1887 at Chelsea, Massachusetts.  John, who gave his occupation as "collector" was born about 1854 at Garland, Maine, the son of Andrew Mayhew Haskell and , Mary Ella Coburn married , son of Andrew Mayhew Haskell and Mary B. (Sargent) Haskell.   At the time of the 1910 Census of Chelsea, John H. Haskell was working as an undertaker.  By 1920 he was working as a clerk at a wholesale automobile business.

Before their marriage, at Chelsea, Massachusetts, in 1877, John H. Haskell signed a page in his future wife's album. 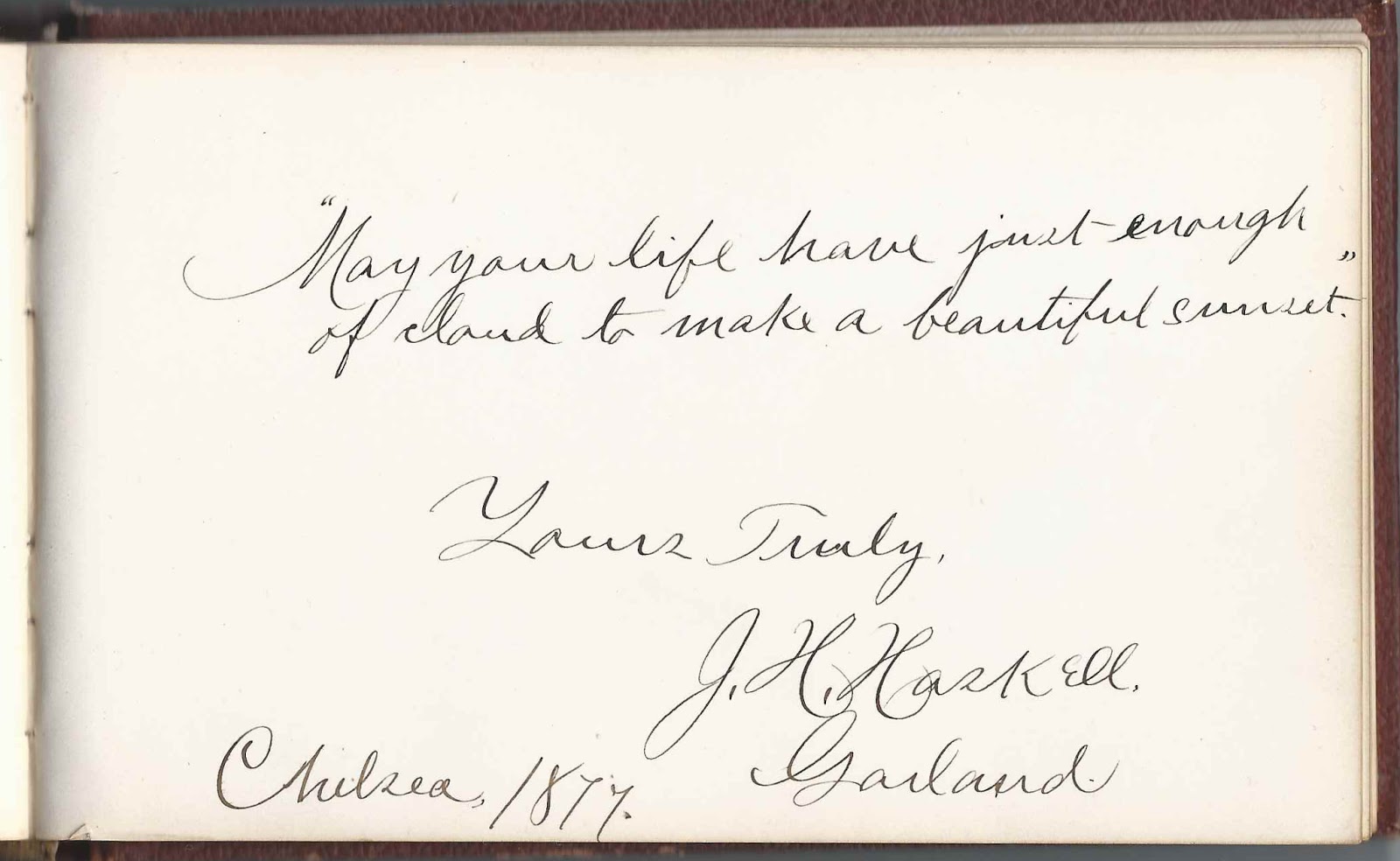 If you have corrections and/or additions, or information on any of the signers listed below, please leave a comment or contact me directly.

One page was signed by Ellen M. Stone, a missionary to areas in the Ottoman Empire.  She signed her page at Samokov, "Eastern Turkey", on September 20, 1878, while she was at Chelsea, Massachusetts.  In the "Miss Stone Affair", Ellen Maria Stone, who hailed from Roxbury, Massachusetts, would later be kidnapped near Bansko, Bulgaria in 1901.  In what some call the first modern "hostage crisis", Ellen and her pregnant companion, were held for over five months and released only after the American public raised funds for their ransom. 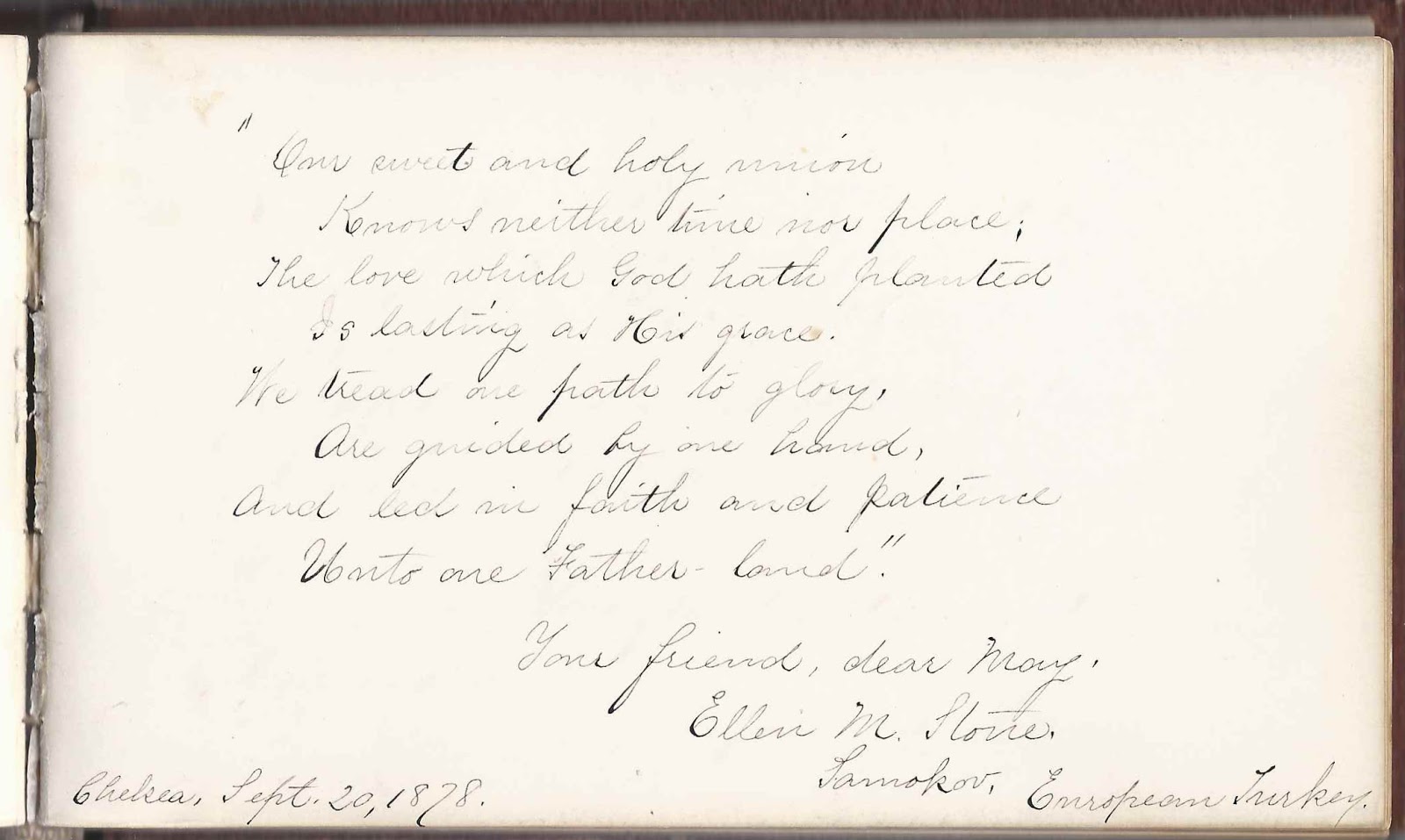 Signers in the Album          [Note: Given names within a specific surname may not be in alphabetical order.]