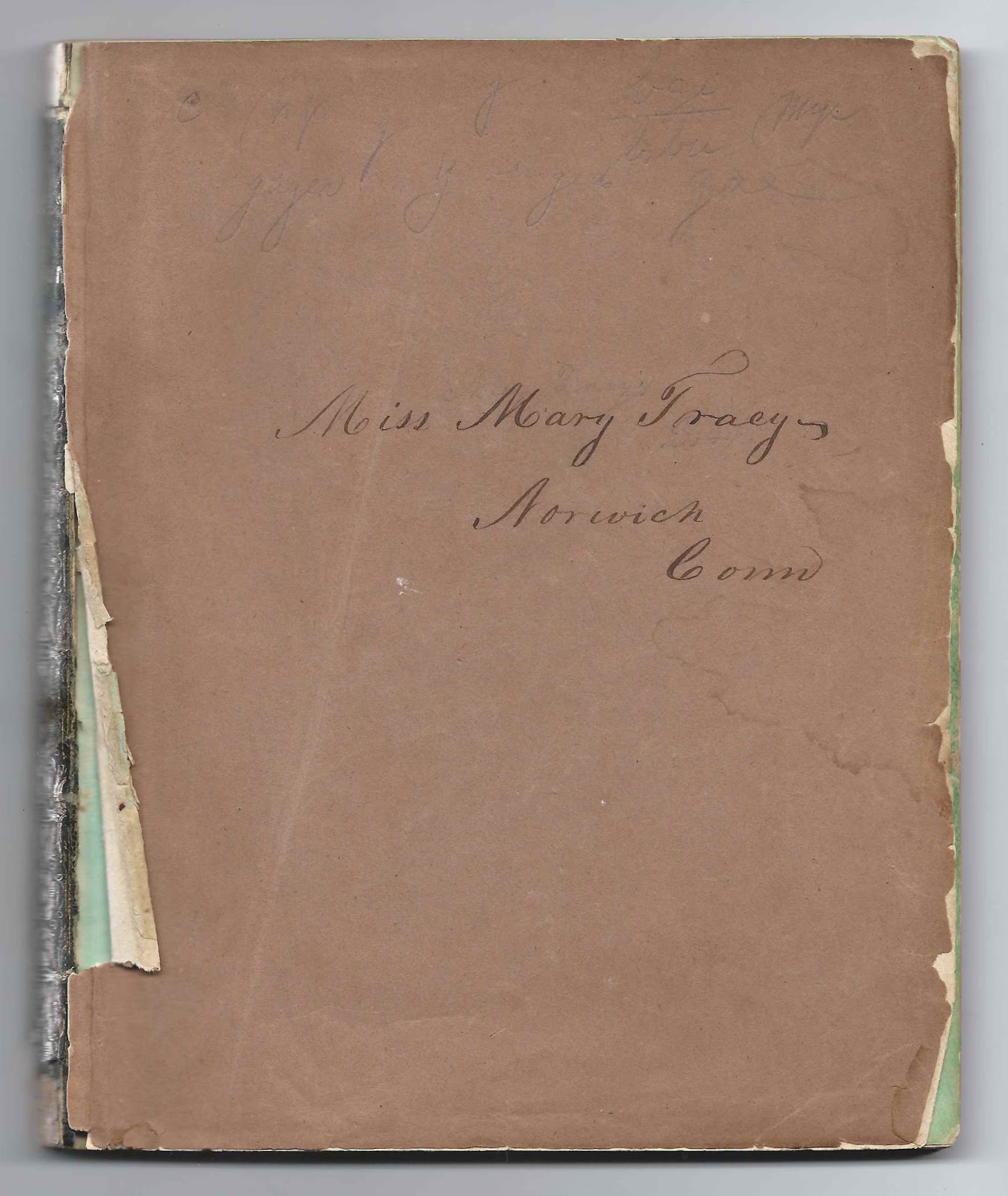 Note of July 2, 2014: A reader theorizes that two pages were signed by a Samuel, who wrote his name backwards.  Samuel, who didn't give his surname, might have been an important person in Mary's life - a brother or husband - in case that is a clue as to which Mary Tracy was the owner of this album.

See another post that features the 1846-1851 autograph album of Aseneth (Nichols) Turner of Norwich, Connecticut.  I didn't notice the names of any people who had signed pages in both albums.

Mary's album is missing its front cover.  It measures approximately 7-3/4" x 6" and contains the sentiments of over 30 of Mary's friends, most of whom, unfortunately, signed with given names only or with initials.  An alphabetical list of the signers appears at the end of this post.

The album was presumably given to Mary at Christmas in 1839 by a person whose surname appears to be Tracy.  I can't decipher the first initial, whether a C or a B.

The album was printed by J. C. Riker of New York, New York.  It has several embossed pages, including two with hand painting, one of which is the title page, below.

I found a couple possibilities for a Miss Mary Tracy at Norwich, Connecticut, one born about 1802 and another born 1824.   Hopefully a reader will be able to tease out her identity from the various clues in the album.

One signer referred to himself as Mary's brother, and the handwriting seems very similar to that on the page signed on Christmas Day 1839 by C. Tracy or B. Tracy.  In case it's a clue, he mentions "The Troy Budget".  Could be a red herring, but in my research on the Tracy family of Norwich, Connecticut, there was a Troy, New York, connection. 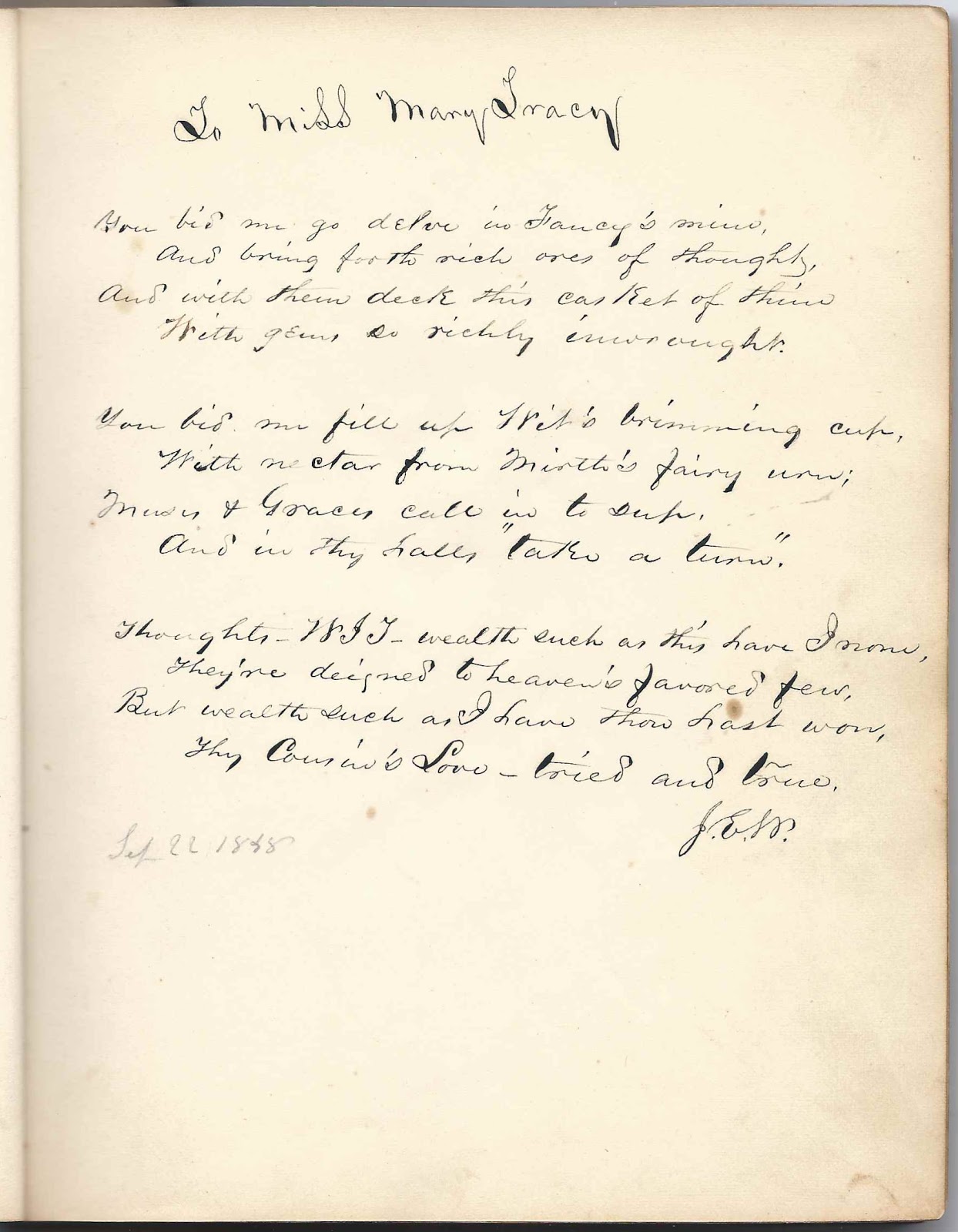 In case this is a clue, Lizzie inscribed a 3-page sentiment at Norwich, Connecticut, on September 1, 1851, and implied that Mary was about to leave her home for a far-off place, though places didn't have to be too far off in 1851 to seem far away. 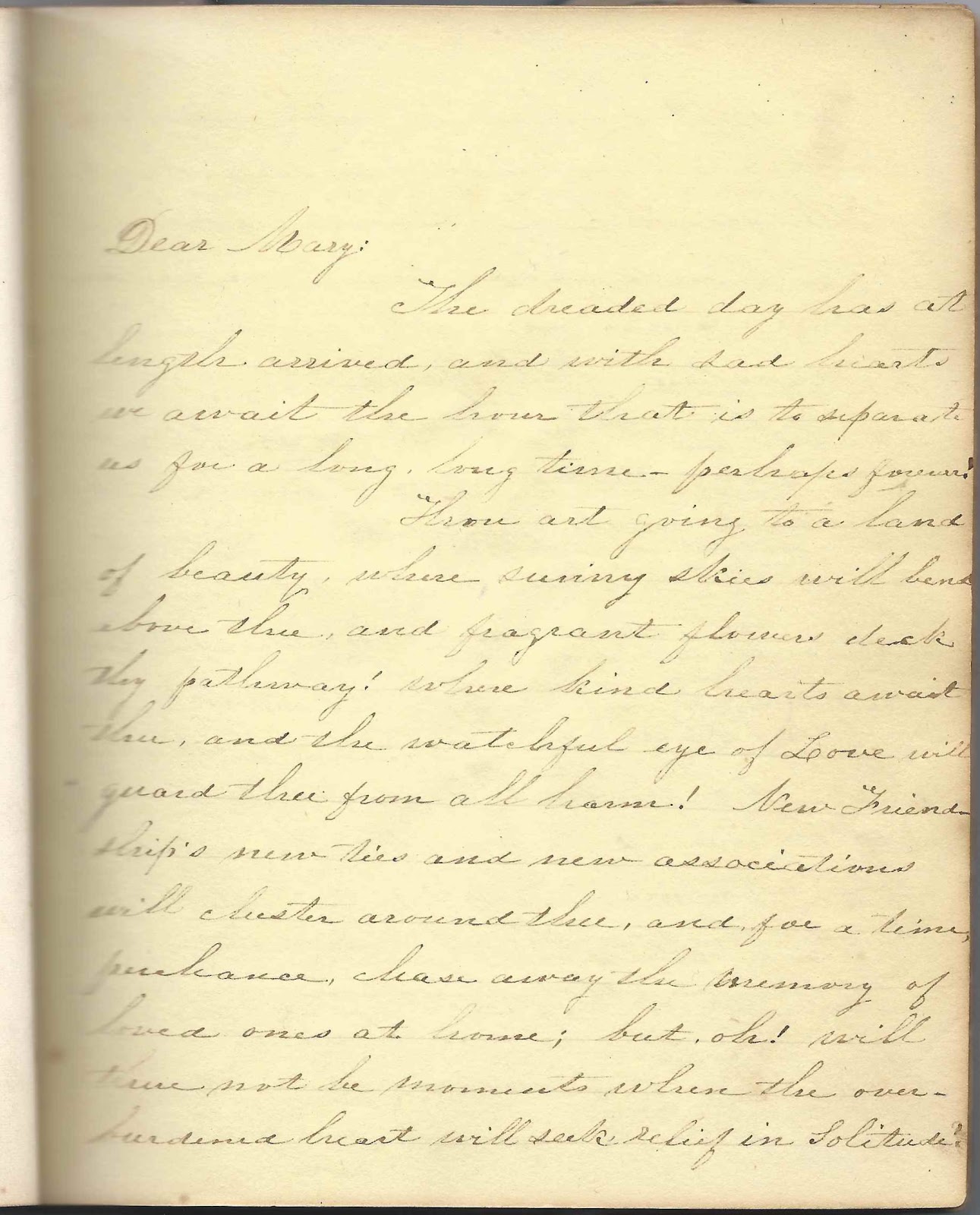 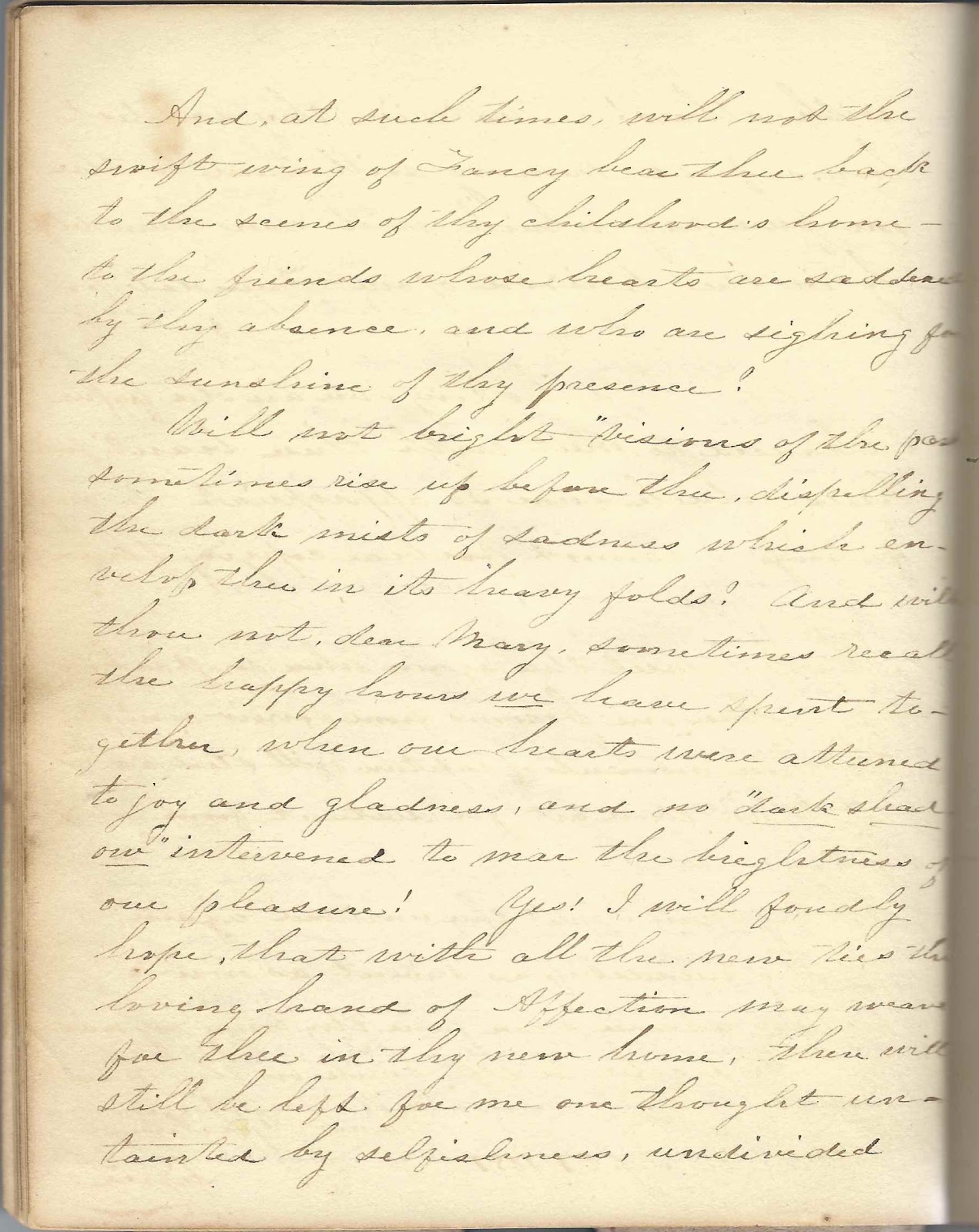 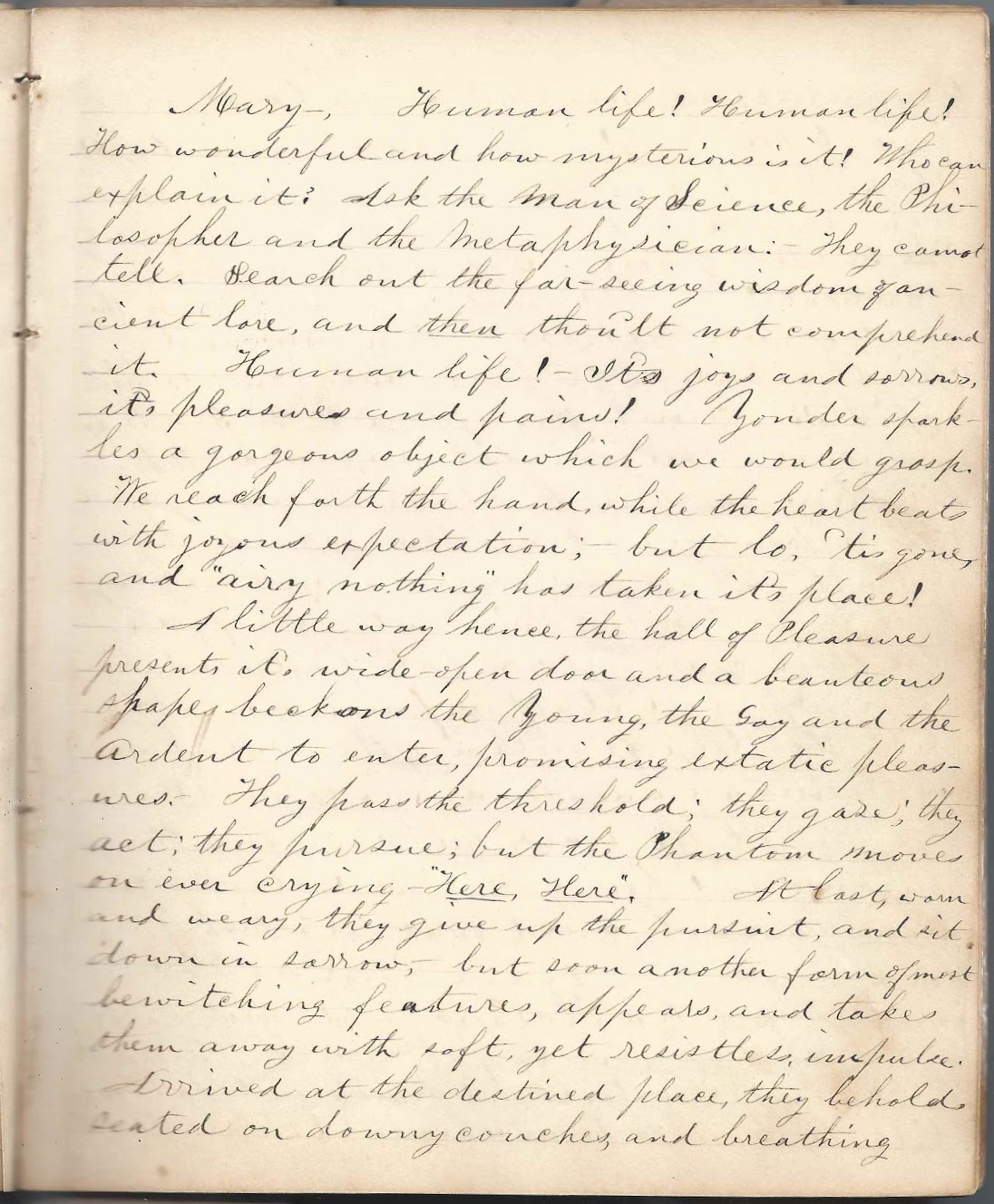 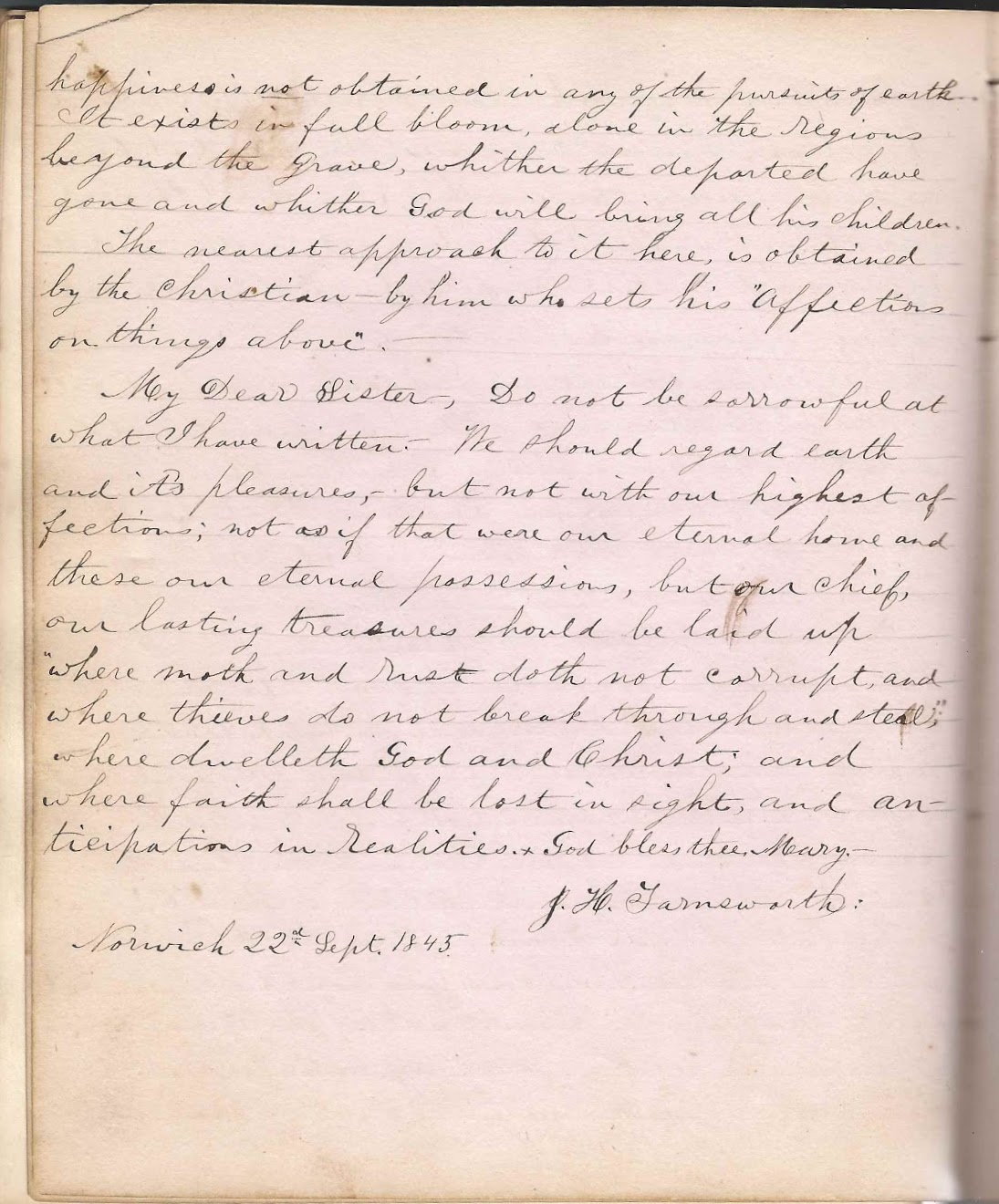 One signer appears to have signed his name backwards.  I believe he was George Palmer, who inscribed a two-page sentiment at Norwich, Connecticut, on December 10, 1848. 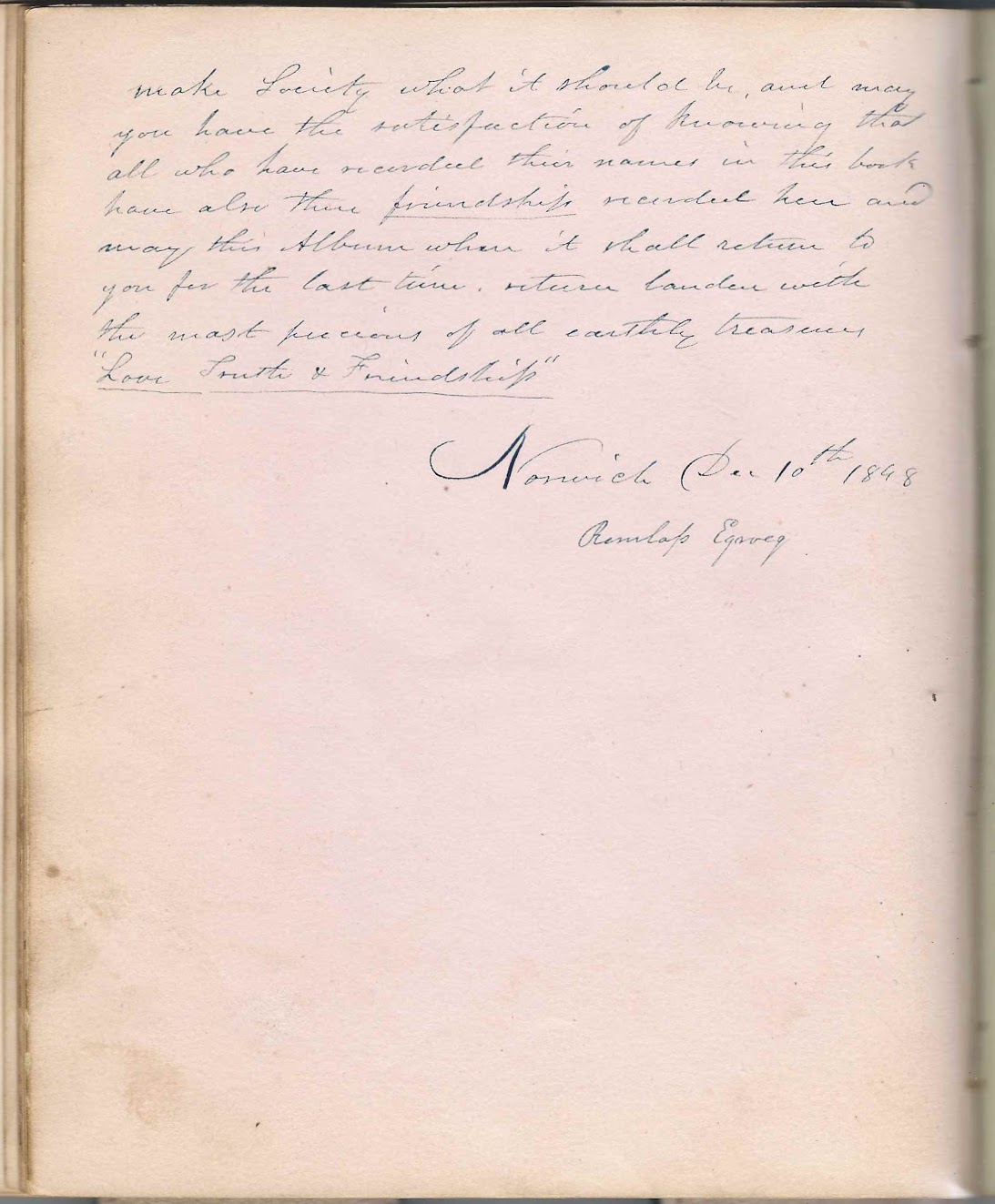 One person sketched a swimming dog with a stick in its mouth.  I'm not sure if the signer's name was Cowper or the poem on the page was by the poet William Cowper.  I tried searching for the wording online and didn't come up with a Cowper poem, but perhaps it was paraphrased. 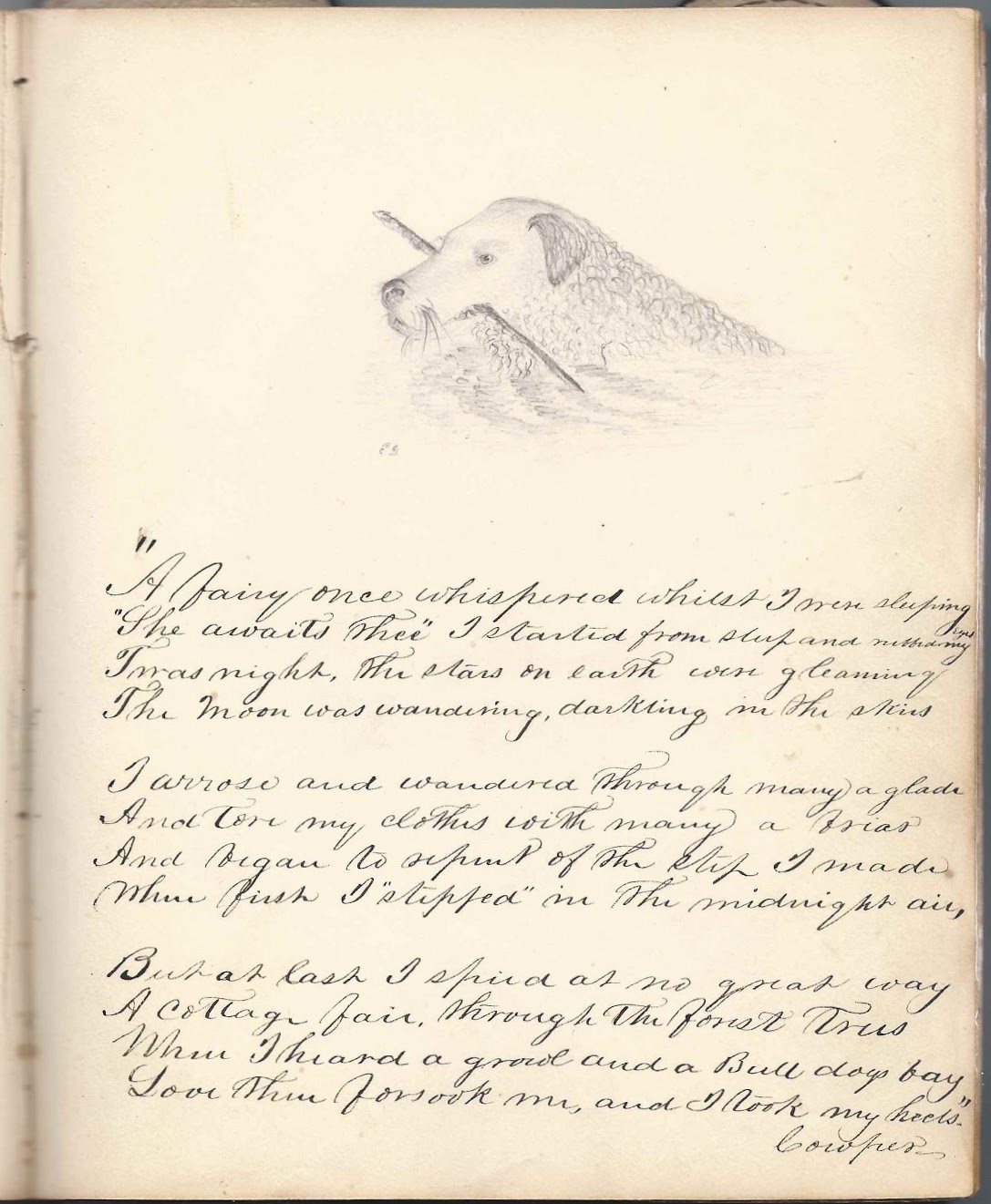 Someone whose name I can't decipher signed two pages in the album, both at Norwich, Connecticut, one dated 1843.  If you can unravel the name - Lemuel, Leumas, or ?, please let me know.  [As you can see in the comments below, reader Nick feels that the signer was a Samuel, who wrote his name backwards.  Samuel may have been an important person in Mary Tracy's life - a brother or husband - which might be a clue as to which Mary Tracy owned this album.]

Posted by Pam Beveridge at 4:15 PM