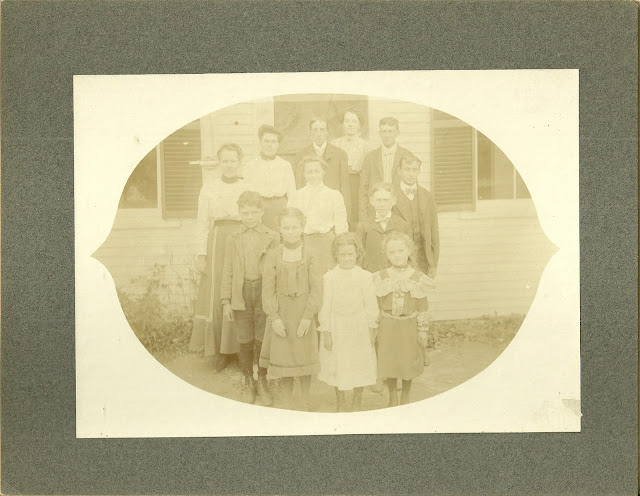 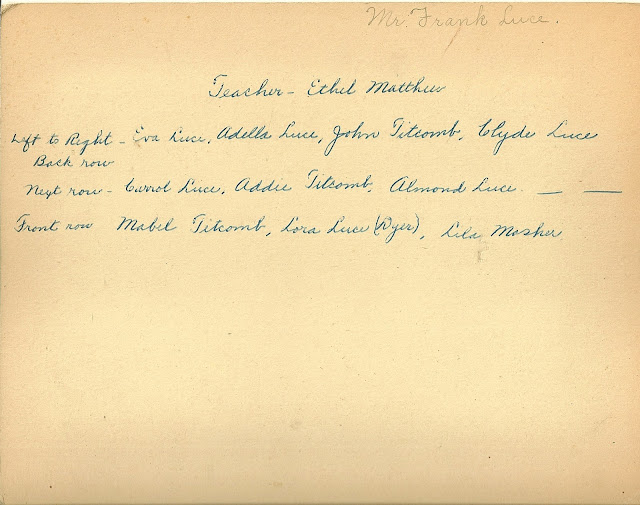 Teacher Ethel Matilda Matthieu was born in April of 1880 at Farmington, Maine, the daughter of Joseph W. Mathieu and Emma Mary Mathieu, born in St. Francois, Beauce, Quebec, and St. Claire, Dorchester, Quebec respectively.  Her parents married at Farmington, Maine on 16 May 1872.

Wilfred was born about 1878 in Canada, the son of Auguste and Celina (Laurendeau) Caron.

Ethel and Wilfred lived at Rumford, Maine, where Wilfred was a barber and later a manufacturer.  By the time of the 1930 Census,  Ethel, after raising at least one child, was again teaching.

Ethel's older brother Albert A. Mathieu graduated from Holy Cross at Worcester, Massachusetts, and became an attorney and judge at Waterville, Maine.

It would be interesting to know how closely Ethel and Alfred were related to Jean-Baptiste Mathieu, the first French Canadian settler at Waterville, Maine.  Jean-Baptiste had migrated from Quebec down the "Indian Trail", later called the Kennebec Road or the Canada Road.  He would stay at a place as long as there was work for him and then move farther south.  In the early 1820s, he had worked his way to Shirley, Maine, where he started a business of supplying logging camps with provisions.  In 1827 he moved his operation to Waterville.

There were six older siblings not in the photograph: Simon, Mary, Emily, Frank Carville, Elizabeth and George.

Cora was born in June of 1885 in South Dakota, the daughter of George and Emma M. (Smith) Oliver, who were born in Industry, Maine, and New Vineyard, Maine, respectively.

Cora's parents were both deceased at the time of her marriage, according to the Maine Marriage Records 1705-1922.   I believe George died in South Dakota; I'm not sure where Emma died.

Cora's paternal grandparents were Thomas Mar Oliver and wife Rachel A. (Gordon) Oliver, born, if my information is correct, in Starks, Maine, and Embden, Maine, respectively.

I don't as yet have information on Emma M. Smith.

I found Cora in the 1900 Census of Anson, Maine, in a household headed by her uncle William Oliver.  Also in the household were his parents, and Cora's grandparents, Thomas and Rachel Oliver.

It appears that Clyde helped his father in the operation of the family farm, as his parents and his own family were living in the same household at the time of the 1920 Census of Farmington.  By 1930, they were living adjacent to each other but in separate households.  Clyde died in 1957 at Farmington, Maine.

By the time of the 1910 Census, the couple was living with their young son in Fairfield, Maine.  Albert's occupation was listed as brass finisher in a car shop.   By the time of the 1920 Census, Eva (Luce) Ward was a widow, and she and her son were back at Farmington, Maine.

On 12 October 1920, Eva married John E. Stevens of Farmington.  He was born about 1884 at Stow, Maine, the son of John A. and Mary E. (Kneeland) Stevens, born in Fryeburg, Maine, and Sweden, Maine, respectively.

The 1930 Census found John and Eva and her son living at Augusta, Maine, where John was a mechanic at the State Garage.  Eva died in 1977 at Farmington, Maine.


Almon J. Luce, brother of Clyde, Adella and Eva above, was born 15 July 1890 at Farmington, Maine.  On 17 August 1918 at Waterville, Maine, Almon married schoolteacher Persis Wentworth.  She was born 14 May 1895 at Freedom, Maine, the daughter of Charles Danford Wentworth and wife Maud Edna (Fuller) Wentworth, born in Waldo, Maine, and Freedom, Maine, respectively.

I found mention of a collection of papers belonging to Maud and her father Edmund Allen Fuller.  The collection includes the autograph book of a young Maud, family photos, Edmund's ledgers and other items preserved and donated by the daughter of Almon and Persis (Wentworth) Luce.

They had a sister Harriet who was born in September of 1889, but she is either not in the photograph or perhaps she is the "Addie Titcomb" in the middle row.  The person who made the identifications could have heard her name incorrectly.

Addie was born in March of 1893 in New Sharon, Maine, the daughter of Thomas William Leeman and wife Marie Elizabeth (Cookson) Leeman.

John and Addie raised a family of at least four children at Farmington, Maine.  In the 1930 Census of Farmington, John's occupation was listed as general farming.  His father Manning, by then a widower, was living with them, for some reason listed as a servant.  John died in 1974.


Mabel Ruth Titcomb was born 28 June 1892 at Farmington, Maine.  She married Joseph Leslie Jannell on 16 June 1918 at Farmington, Maine.  He was born at Lisbon Falls, Maine, on 4 February 1896, the son of Leslie David Jannell and wife Belle Jennie (Dingley) Jannell.   Joseph and his parents were living at Mexico, Maine at the time of the 1910 Census; his father was a machinist at a paper mill.

After their marriage, Mabel and Joseph moved to Massachusetts.  They were living at Weymouth, Massachusetts at the time of the 1920 Census, where Joseph was working as a mechanic at a garage.

In 1921, Joseph started his own garage, Jannell Motors.  His reputation grew to the point where Ford offered him a franchise in 1933.  Jannell Motors is still in operation today, at locations in Weymouth and Hanover, Massachusetts.  One of the oldest Ford dealerships in the U. S, it's run by two grandsons of Joseph and Mabel.

Harriet ("Hattie") Mary Titcomb was born 26 October 1889 at Farmington, Maine.  Hattie became a teacher and moved to Massachusetts, in the general area of where her sister Mabel and husband Joseph Leslie Jannell were living.   Hattie died at Plymouth, Massachusetts in 1984.

Carroll Luce and Lora Luce were brother and sister, the offspring of Nathaniel and Lida E. (Mosher) Luce. Nathaniel was born in Freeman, Maine; Lida was born in Farmington, Maine.

In addition to Carroll and Lora, there were two other daughters in the family.

Carroll Luce was born 28 June 1892 at Farmington, Maine, the son of Nathaniel and Lida Eliza (Mosher) Luce.  His birth record shows a name of Jessie, as well as Carroll, making me wonder if he had a twin who didn't survive, of if his parents hadn't yet made a final choice of names for him.    Someone wrote [apparently later on] the name Carroll and a date of 1907, so it appears they were linking the birth and death records.

His 1907 death record is even more confusing, as his father is listed as Nathaniel Luce, but his mother is listed as Jane Carville, who was in fact Nathaniel's mother.  His birth record shows his mother as Lida E. (Mosher) Luce.  Did someone in the town office have a brain cramp, or is there another Jane Carville I don't know about?  Perhaps a reader will come to the rescue.

Sadly, Carroll died from complications of appendicitis on 26 July 1907.

Lora Luce Carroll's sister, was born 13 November 1897 at Farmington, Maine.  I think that's her birth date, as there is a birth record for that date with no name listed, which was true for at least one of their other children.

Notice that person who wrote the identifications put the name "Dyer" in parentheses after Lora's name.  Perhaps this person was a member of or more familiar with the Nathaniel Luce family than the other families.

Lora and her husband lived at New Portland, Maine, where he worked in farming and was a laborer.  Lora named a son after her brother Carroll.  Lora died in 1995 at Farmington, Maine.

Lila married Linwood James York, who was born 10 May 1896 in Brighton, Maine, the son of James W. and Mary Esther (Cooley) York.

Lila and Linwood were farmers and raised their family at Farmington, Maine.  Lila died at Farmington in 1979.

Spreading out into Maine a bit, I find a couple possibilities, but I have no way of knowing if I have the right Addie.  Hopefully a reader will come forward.

I'm leaning toward the possibility that she was actually Harriet "Hattie" Mary Titcomb, sister of John Titcomb and Mabel Titcomb, as discussed above.

Posted by Pam Beveridge at 2:10 PM