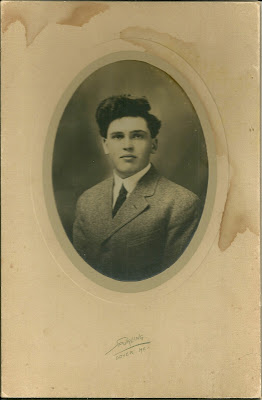 Photograph of a young man identified on reverse as Charles Coy, brother of Leona Richards.  The photograph was taken by the Spurling studio of Dover, Maine. 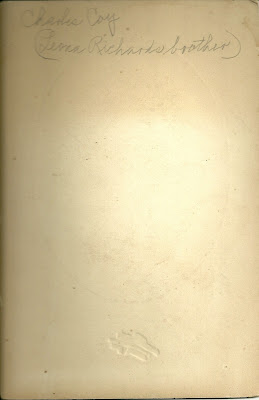 Marion was a teacher in Dexter, Maine, as I've heard from a reader, one of her former students.


I'm not sure if the couple had any children or not.  In the 1930 Census, they're in Dexter, Maine, and have no children living with them.
See an obituaries for Charles M. Coy and Marion E. (Chandler) Coy.  Note that Charles' sister Leona (Coy) Richards, the sibling mentioned on the reverse of his photograph, survived him.
If you have any corrections, additions or insights regarding the information presented here, please leave a comment or contact me directly.  Thanks!
For more information, see the page for Charles M. Coy and Marion E. (Chandler) Coy at the Maine and Maritime Canada Genealogy network.
Map of Piscataquis County, Maine:
View Larger Map
Thanks for stopping by!
.

Posted by Pam Beveridge at 1:59 PM