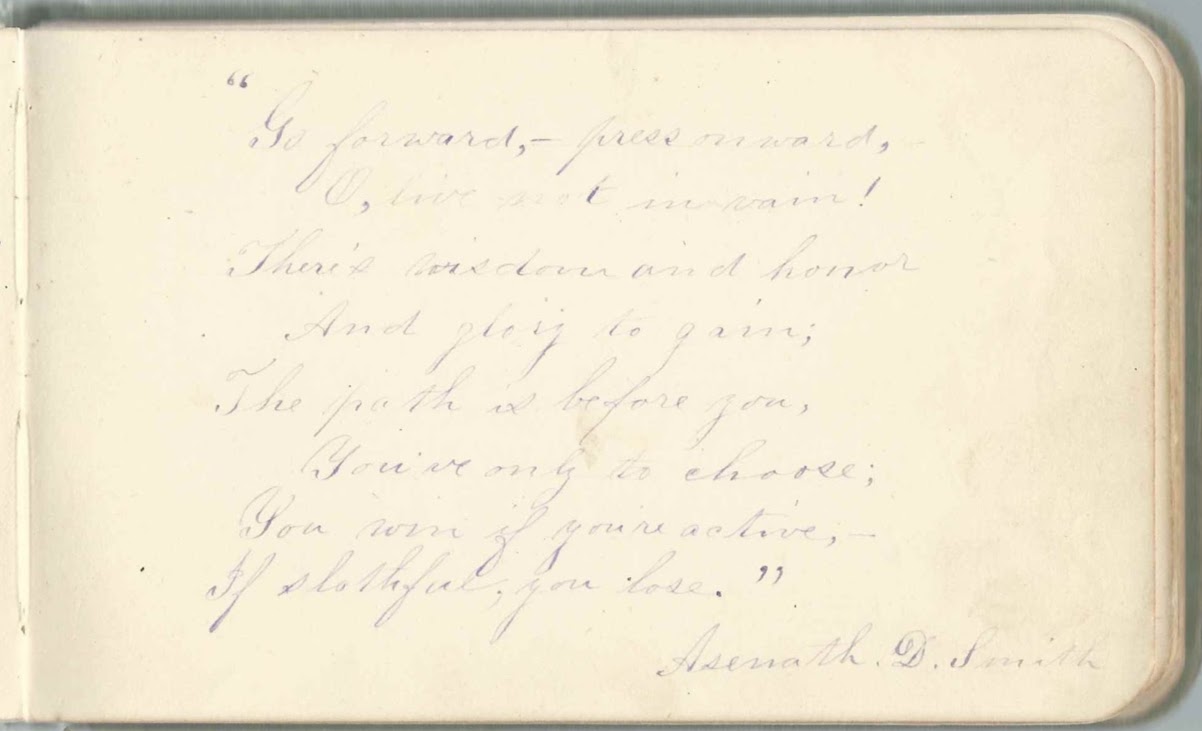 The page above was inscribed in 1881 by Adin L. Smith in the autograph album of his cousin Berniece E. Allen of Centerville, Maine.   Adin's mother Asenath Delia (Allen) Smith and Berniece's father Eben F. Allen were siblings, the offspring of Henry and Leah L. (Jacobs) Allen. 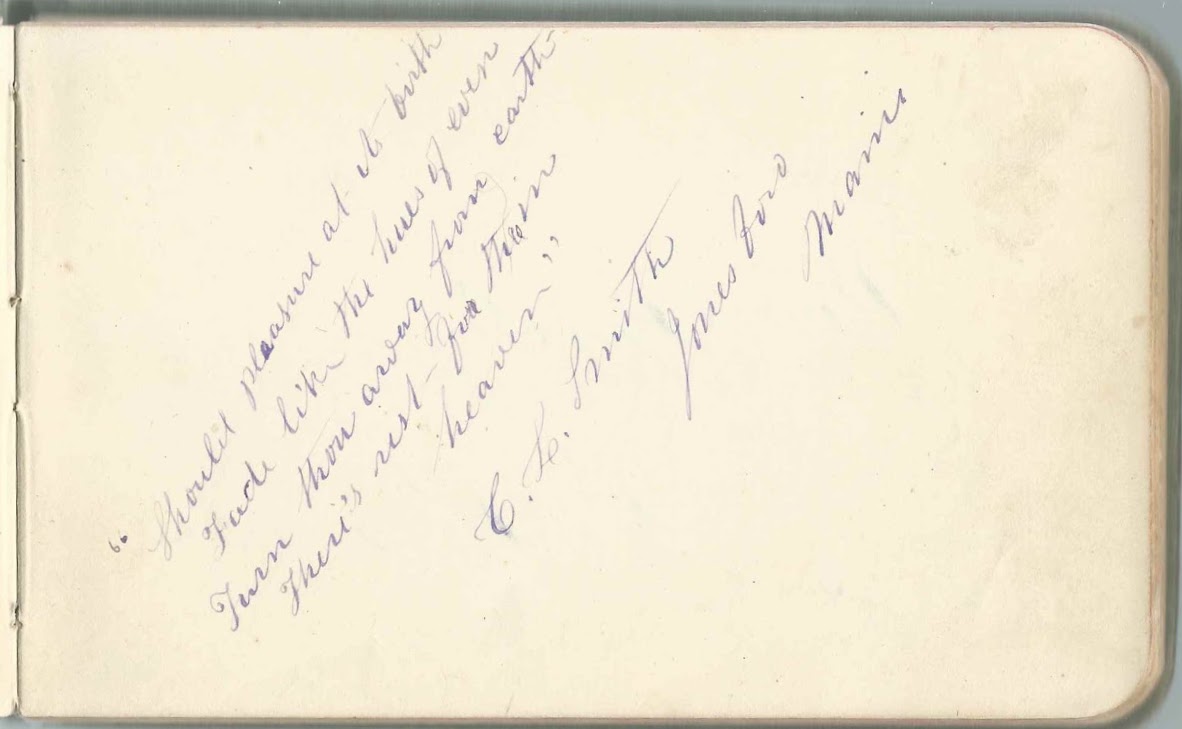 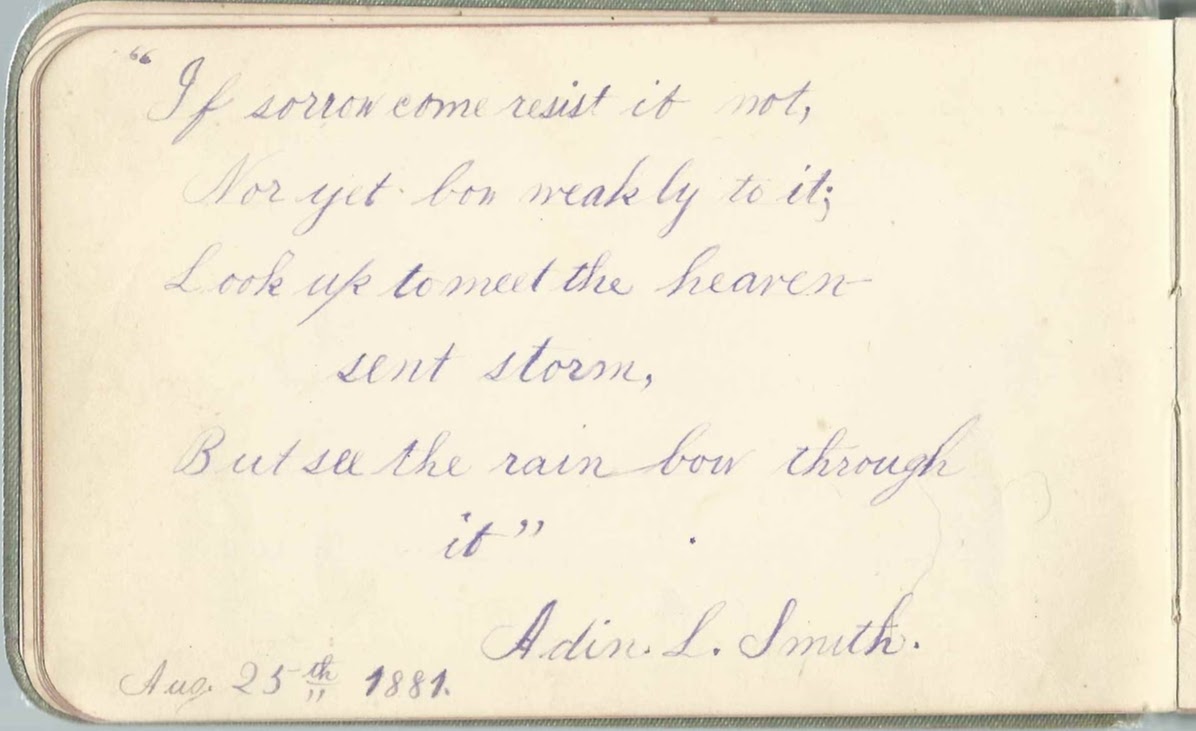 In 1894, Adin L. Smith married Alice M. Bridgham.  She was born 21 August 1872 at Whitneyville, Maine, the daughter of Zenas W. Bridgham and wife Lucy (Watts) Bridgham.  According to the marriage record, Adin was a medical student at the time; he graduated from Jefferson Medical College in Philadelphia, Pennsylvania, in 1894.  It's interesting that there was a Dr. Henry Herbert Smith in Machias at the time; perhaps he was an inspiration for Adin, who also established a practice at Machias, Maine.
Below, a report in the Maine State Board of Health Annual Report of 1904:
Machias.—June 16, 1903, Dr. A. L. Smith, secretary of the local board of health of Machias telephoned that a man with smallpox had come out from a bark peeling camp on Township 43, about forty miles from Machias. Arrangements were made with Dr. Smith to go into the camp to vaccinate the members of the crew, to disinfect, and to establish such quarantine regulations as might be found to be required. It is not known that any other case resulted from exposure to this one. The men were living in a tent, and left the camp before the eruption was fairly out.
A 1920 issue of the American Journal of Public Health indicated that Dr. Adin L. Smith had been appointed District Health Officer for Hancock and Washington Counties, Maine.
From what I could determine, Dr. Smith and his wife had two children, a daughter Faye, who married Lawrence E. Merrow, and a son Loring B., who died in childhood.  Adin L. Smith died in 1927 at Boston, Massachusetts.

Posted by Pam Beveridge at 8:55 AM