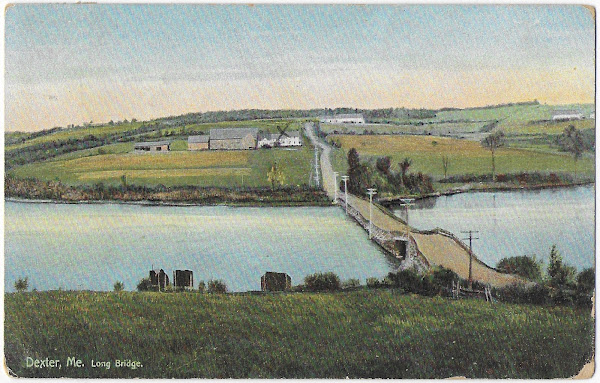 Early 1900s postcard from Grace Dunham at Dexter, Maine, to Miss Edna Brackett at Newport, Maine.  The postcard depicts the "Long Bridge" at Dexter,  with Grace's home, a handsome farmstead, marked with an X.
The postcard dates to before 1919, when Edna married William Howard Smith, assuming Edna was Edna Sybil Brackett (1892-1920).
The body of water is Lake Wassookeag, with Route 23 crossing a particularly narrow portion. 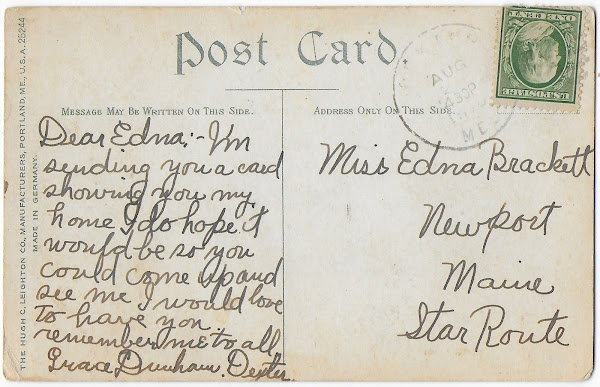 Grace was presumably Grace Mae Dunham (1893-1923), daughter of William F. Dunham and Mabel (Peavey) Dunham and older sister of Anna Dunham (1902-unk), who would marry Herman George Thiel and become an pharmacist in Florida.
Coincidentally, several years ago I found Grace's obituary in a scrapbook of Skowhegan and Dexter area items and posted it then in this blog, excerpted below. 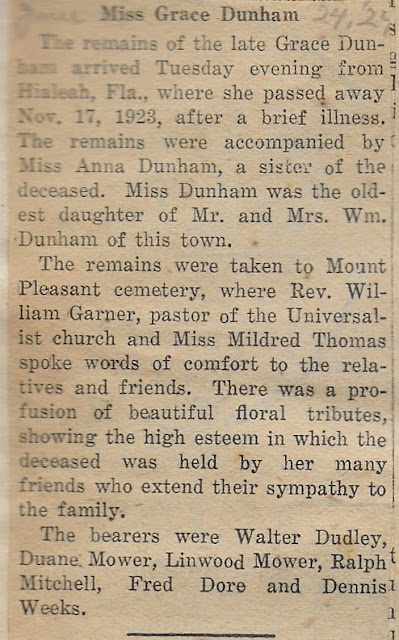 Miss Grace Dunham
The remains of the late Grace Dunham arrived Tuesday evening from Hialeah, Fla, where she passed away Nov. 17, 1923, after a brief illness.  The remains were accompanied by Miss Anna Dunham, a sister of the deceased.  Miss Dunham was the oldest daughter of Mr. and Mrs. William Dunham of this town.
The remains were taken to Mount Pleasant cemetery, where Rev. William Garner, pastor of the Universalist church and Miss Mildred Thomas spoke words of comfort to the relatives and friends. There was a profusion of beautiful floral tributes, showing the high esteem in which the deceased was held by her many friends who extend their sympathy to the family.
The bearers were Walter Dudley, Duane Mower, Linwood Mower, Ralph Mitchell, Fred Dore and Dennis Weeks.
Edna Brackett of Newport, Maine, was likely Edna Sybil Brackett (1892-1920), daughter of Charleston Gilman Brackett and Elizabeth (Patten) Brackett and wife of William Howard Smith, with whom Edna had a son, Elmer Vincent Smith.
Sadly, both Grace and Edna died young, Edna presumably as a result of childbirth.  If you have information on the Dunham, Peavey, Brackett, Patten and Smith families of Maine, please leave a comment for the benefit of other family researchers.
Posted by Pam Beveridge at 1:25 PM