1847 Letter from Cyrus Cole in Freeport, Maine, to his Uncle John Cole in Turner, Maine 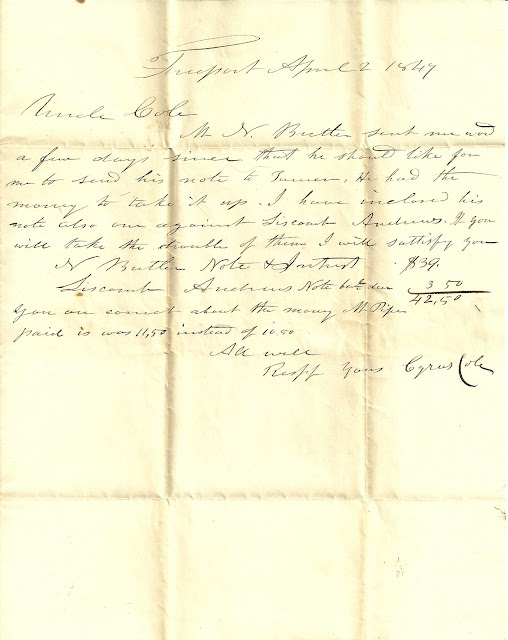 April 2, 1847 letter from Cyrus Cole, then living at Freeport, Maine, to his uncle, John Cole, living in Turner, Maine, perhaps in the household of James H. Parlin. 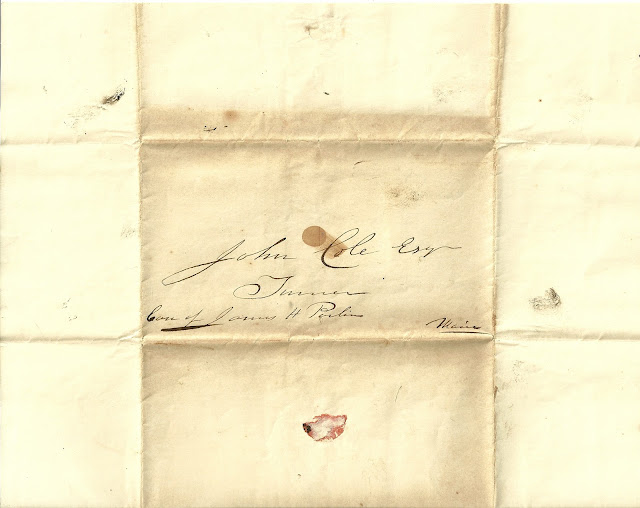 Transcription: (I welcome your thoughts on my possible mistranscriptions)

All well,
Respf Yours
Cyrus Cole

On 29 September 1840 at Buckfield, Maine, Cyrus married Sarah A. DeCoster, who was born 18 June 1817 at Buckfield, Maine, the daughter of Samuel and Sarah (Bacon) DeCoster.  Her paternal grandparents were Jacob DeKoster (or Jacobus DeKoster) and his wife Priscilla (Rogers) DeKoster.  Her maternal grandparents were James and Joanna (Hamblin) Bacon.

The couple had no biological children but raised an adopted son, Charles M. Cole, who was born in 1867 and died in 1958.

I found that a couple has done extensive work on this family and posted their results at the Find A Grave network.  In addition to an interesting bio of Cyrus, there are links to pages for many of his relatives and in-laws.

If you have any corrections, additions or insights regarding the information presented here, please leave a comment or contact me directly.  Thanks!

For more information, please visit the Maine and Maritime Canada Genealogy network to view the page of Cyrus Cole and Sarah A. DeCoster.