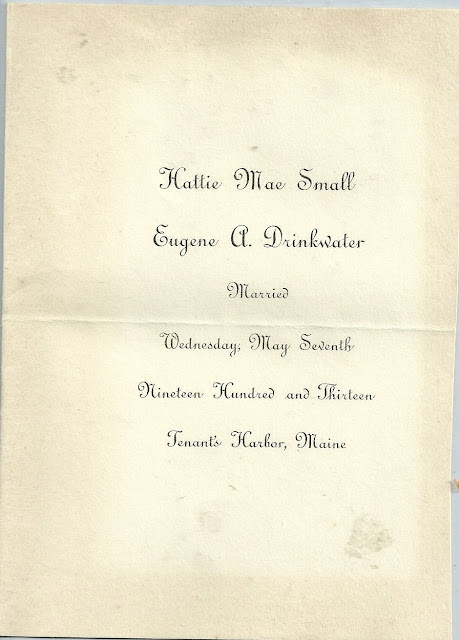 Wedding announcement for Hattie Mae Small & Eugene A. Drinkwater, married at Tenants Harbor, Maine, on May 7, 1913.

On May 7, 1913, Eugene married Hattie Mae Small. Hattie, the daughter of Harry Small and May (Bragg) Small, was born about 1892 at Vassalboro,  Maine.  Perhaps the wedding was held at Tenants Harbor because it's a scenic coastal location.

The 1920 Census shows Eugene and Hattie living at Webster, Maine, with their son Edwin N. Drinkwater, born about 1915, and Eugene's son Raymond Drinkwater from his first marriage.

Eugene died in 1928 and is buried with Statira in the Pleasant Hill Cemetery at Sabattus, Maine.  Webster changed its name to Sabattus in 1971, in honor of an Anasagunticook Indian chief.

Posted by Pam Beveridge at 1:27 PM